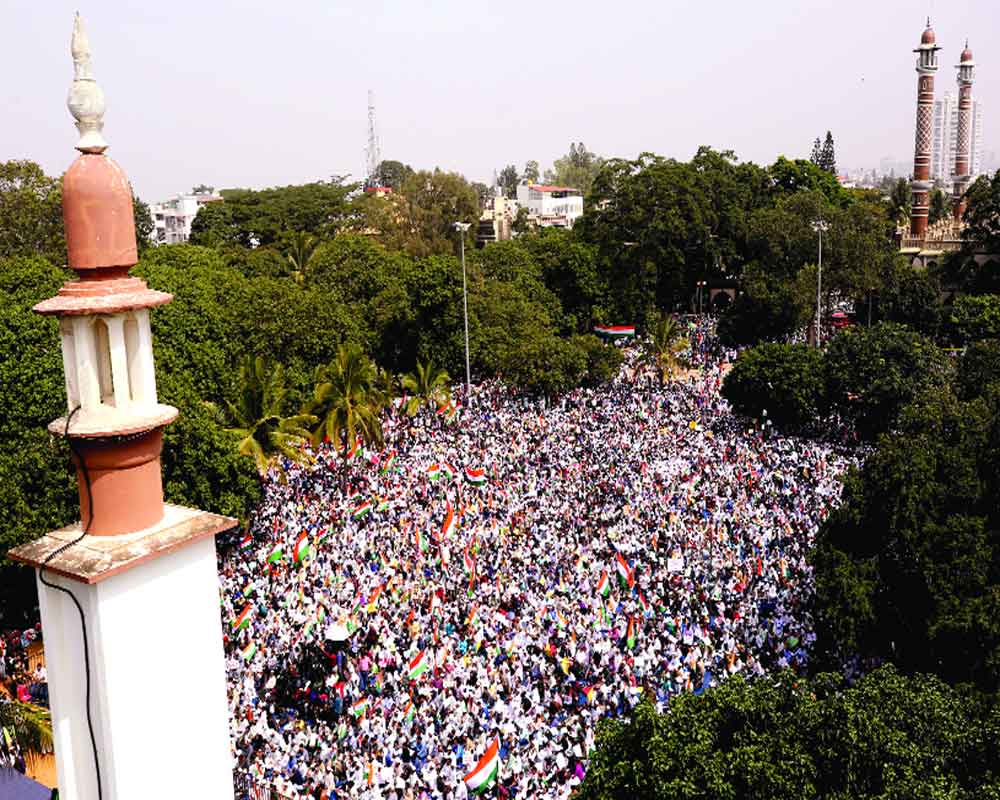 The three southern States of Kerala, Karnataka and Tamil Nadu portrayed the image of a cauldron on Monday as thousands of people marched on the streets to hold rallies and demonstrations against the Citizenship Amendment Act (CAA).

Retired SC Judge Gopal Gowda, who was also present at the protest, read out the Preamble of the Constitution, along with several lawyers. Justice Gowda said Prime Minister Narendra Modi and Union Home Minister Amit Shah must clarify people’s doubts and State conclusively whether the CAA and NRC would be implemented.

In Hyderabad, Reddy said, “ Our deputy CM, who is also a minority leader, said recently that we will oppose the NRC. He spoke to me before making that statement. I want to make it clear that we would stick to it and oppose (implementation of) the NRC.”

In a related development Governor Arif  Mohammed Khan , who had been invited by Leader of Opposition Ramesh Chennithala to be the chief guest of K Karunakaran Memorial Day at Thiruvananthapuram on Monday was  asked by the organisers of the meeting  not to attend the event. Though no reasons have been given, it is understood that the Governor’s stand supporting the CAA 2019 provoked K Muraleedharan MP, son of the late leader and this is being seen as the reason for keeping  the former away.

Tamil Nadu saw the beginning of a new and rejuvenated front, nay, a battle front under the DMK taking shape on Monday with the staging of a massive rally in Chennai against the Citizenship Amendment Act 2019.

M K Stalin, the DMK president who led the rally featuring leaders of all constituent parties in the UPA, described it as a battle front against the communal, divisive policies pursued by the BJP government at the Centre. “This battle will continue till the CAA is withdrawn,” declared Stalin while addressing the participants of the rally.

Nearly a lakh people, including women and students, took part in the rally which literally paralysed the capital city. No untoward incidents have been  reported though the rally was staged amidst denial of permission by the City Police Commissioner.

The Madras High Court in a special sitting held  late Sunday night asked the Chennai City Police to deploy drones and video record the rally to find out persons who perpetrate violence and create law and order problems.

“More than 10,000 cops had been deployed by the authorities to maintain law and order. But the participants themselves ensured that the rally took place in a smooth and peaceful manner,” said Stalin at the conclusion of the rally.

“This is not just a rally. It is a new battlefront which would fight the CAA 2019 till the Centre withdraws it,” declared Stalin. He said the rally was just a beginning and new and innovative demonstrations against the CAA  were on the anvil. The news from Jharkhand about the electoral gains made by the Congress in the assembly elections added to the enthusiasm of the rallyists.

An interesting feature of the rally was the placards waved by the participants. All placards had anti-BJP and anti-RSS slogans displayed prominently. Other than this, the rallyists   were seen waving the pictures of Stalin and his son  Udhayanidhi making it clear that the latter is the chosen heir of the DMK president. Posters and pictures of Kanimozhi and other senior leaders of the DMK were conspicuous by their absence.

Stalin also declared  that he would soon announce the net course of agitation after discussions with leaders of the constituent parties. “But I assure you that more parties and organisations would join the next round of  agitation,” he said.