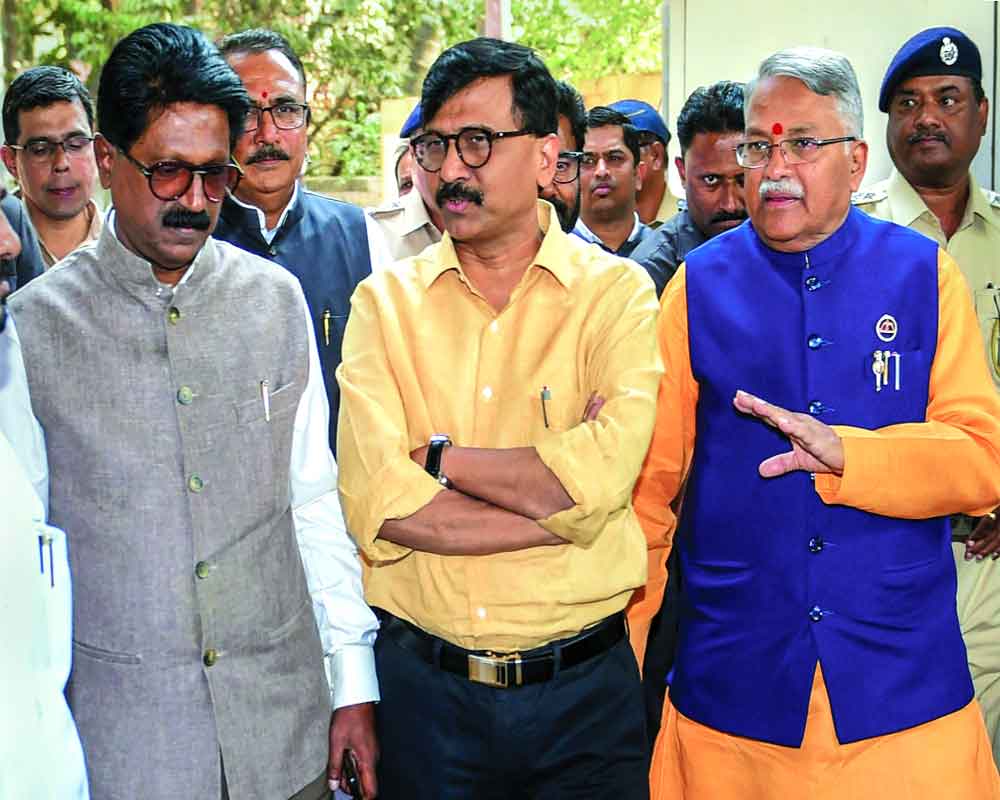 The ruling saffron alliance partners on Monday indulged in posturing over a possible tie-up between them for the forthcoming Lok Sabha polls, with the Shiv Sena contending that it was a “big brother” in Maharashtra and the BJP retaliating that it was not “helpless” to run after its long-term ally for a seat-sharing arrangement for the LS elections.

From the statements emerging from the two long-term saffron allies, it became quite clear that while the Shiv Sena was not averse to a tie-up with the BJP provided it was offered more number of seats to contest in the seat-sharing arrangement, the BJP was keen on inking the electoral alliance by not giving more than number of seats that it had allotted to the ally in the 2014 polls.

It may be recalled that in the 2014 Lok Sabha polls which the two saffron parties had contested as an alliance, the BJP and Shiv Sena had contested 26 and 22 seats respectively in the State. The two parties had put up a spectacular performance in the polls by together winning 40 seats (BJP-22 and Sena-18 seats) out of total 48 seats.

In an indirect pointer to a climbdown from its earlier stand of going it alone in Lok Sabha polls, the Shiv Sena said it is the “big brother” in Maharashtra and will continue to remains so, thus indicating it would not be averse to a tie-up with the BJP provided it is offered more number of seats to contest in the polls.

Talking to mediapersons after a meeting of party MPs at Thackerays’ Bandra residence “Matoshri”, Shiv Sena spokesperson Sanjay Raut evaded a reply to a query if the Sena was firm on going it alone in the Lok Sabha polls but said, “We have not  received any proposal from the BJP. Nor has any BJP leader met Uddhav Thackeray in this regard”.

Asked to comment on the intense speculation that the BJP had offered 50:50 seat-sharing formula to the Shiv Sena, Raut said, “This is a just a rumour and false news. We did not discuss any proposal from the BJP at the MPs’ meeting with Uddhavji. We have also not received any such proposal. Shiv Sena has always practised politics on the basis of its conditions.

Indulging in tough talk that also carried a message that the BJP was keen on having a tie-up with the Sena for the Lok Sabha polls,  Maharshtra Chief Minister Devendra Fadnavis said, “We are not helpless. Don’t bother about the alliance (for the Lok Sabha polls). The party ( Shiv Sena)  that believes in Hindutva will come with us. Otherwise it will go against us. Jo ayega uske saath aur nahi ayega uske bina (We will go with those who come with us and will go without them if they don’t come with us). We will not rest until the Modi Government is reinstalled in the country.”

Speaking at the concluding ceremony of the BJP’s State executive meeting held at Jalna in Marathwada region, Fadnavis said, “We are keen on an alliance with the Shiv Sena. We would like this alliance for the larger good of the country. All those who believe in Hindutva should come together. We are trying to bring all the Hindutva forces together”.

“We do not want power to go back to those who have looted the country in the past. That’s why we are working towards forging an alliance with the Shiv Sena. But, no one should assume that we are helpless. If someone believe that way, it will be merely their assumption. Our is a party of Bharat Ratna Atal Bihari Vajypayee and Prime Minister Narendra Modi. We are a party that came up from zero. We can never be helpless,” the Chief Minister said.

From the statements of both Raut and Fadnavis, it is evident that they are indulging in hard bargaining over seat-sharing, before getting to the negotiation table.