A hero against all odds

A hero against all odds 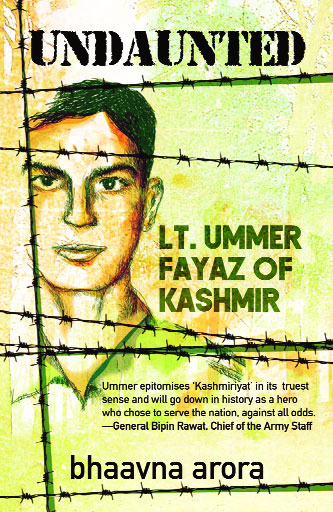 Bhaavna Arora’s book on Lt Ummer Fayaz, who was killed by militants in Kashmir while he was back home, immortalises the memory of a young man with conviction beyond his years. An edited excerpt:

The new term had begun and cross-country practice was on in full swing at the NDA. The stress fracture had really begun to bother Ummer, but he remembered Majid’s advice and refrained from resting or reporting in sick. He continued to run. That year, the holy month of Ramzan was due to start in the searing heat of July. During a cross-country run with his squadron, Ummer spotted Majid running ahead of him and ran faster to catch up.

“Sir, roza starts tomorrow. Kashmir has seen the moon.” “Yes Bhai! I confirmed with my Ammi too and fasting does start tomorrow.” Majid smiled at Ummer, not wanting to damage his morale. But he knew that only sheer grit would see them through fasting and training at the same time. And with the stress fracture, he was worried for Ummer. They reached the end of their cross-country course, and Majid came over as Ummer was cooling down with his squadron in the parade ground. “All set for tomorrow?” Majid enquired. “Yes sir! It will not be the same as fasting and praying with the family back home. But I don’t intend to miss roza at any cost.”

“Ummer, you will be amazed to see how well-supported we are here during the holy month. People talk of secularism in India, but the NDA truly practises it. Every Muslim cadet gets to observe his roza.” People would never have believed this of the Army back home in Kashmir. Ummer’s heart felt lighter by the knowledge. That evening, Ummer, Bhoi, and Ayush were hanging out in their dorm. Cadet Madhurya Malik from Ummer’s foreign language class had dropped in for a chat. Ummer introduced Malik to the boys, and Bhoi interrogated him until he was satisfied. Malik revealed that he was from Lucknow, that he was born in Shamli but had studied in Rudrapur in Uttarakhand, and that his father worked in a horticulture firm.

At this point, Majid walked in. All of them sprang to attention. He had come to ask Ummer to wake him up the next day. He trusted his pal in this regard more than he did his alarm clock with its seductive snooze button. “Yes sir!” cried Ummer, to confirm that he had noted the order. “And you, joker!” Majid was addressing Malik now. “Yes sir,” Malik shouted. “Run faster. You’re as slow as a snail.” “Yes sir!” Malik shouted again. “And you, halwai, you need to lose some weight. That Prabhu and you are both overweight, and you slow down the entire squadron!” Majid said to Bhoi.

Prabhu was another cadet from the same squadron, and it so happened that he and Bhoi bore an uncanny resemblance to each other apart from the extra pounds. The boys relaxed when Majid left the room. “Run fast, huh! We’ll see how fast he runs from tomorrow, once he starts fasting.” Malik was clearly not happy about being compared to a snail. “It’s all just practice, Malik. Bhoi here is a good example. He was no runner to begin with, but now he maintains good speed,” said Ummer, wanting to defuse the tension.

Still annoyed, Malik continued to defend himself, “The legendary Vikram Batra was never a good runner, but he captured two peaks during the Kargil War. Bullets travel faster than a man, and I’m good at firing.” “That’s assuming that you have a gun to fire a bullet from. That’s not always the case in a war zone. Sometimes all you’ve to do is run to save yourself,” Ummer said, in his old manner of calling a spade a spade.

This took Malik by surprise, and he looked a little wounded. “Which side of the bed did you get up from this morning?” he asked Ummer, evidently wanting to divert the conversation from his own weaknesses. “I don’t know about today, but tomorrow, I better get up on the early side so I get some time with Allah before I begin my roza.”

“Oh, you will probably get some food before roza starts. Could I also come with you to the mess tomorrow?” Malik begged. “Of course, you are welcome to join us but we start early, at around 0400 hours,” Ummer warned. Bhoi and Ayush would also have loved the extra goodies, but sleep was equally dear to them. That was an unearthly hour to wake up, even for precious food. Ummer was at Majid’s room at 0300 hours sharp, and they had their sehri at the mess. Roza is observed between sunrise and sunset, and those observing the fast do not eat or drink anything during those hours, not even water. Surprisingly, Malik made it in time for the sehri, amusing them with his enthusiasm for the special food.

The NDA mess staff did not disappoint. They had cooked an elaborate meal for all the Muslim cadets. It was evident that they had been hard at work in the kitchens from midnight. The mess workers also went around the tables, making sure the cadets were eating well and coaxing them to take just a little more. Their health and well-being was of supreme importance to the staff of the NDA. These cadets were training to defend the nation and the Academy would do everything in its power to help them succeed.

It was also the day that Ummer began learning a new skill to add to his repertoire — horse riding. The horses at the NDA are majestic animals. Ummer looked at them with awe, marvelling at their muscular structure and wondering how many times he was going to fall off them before he mastered the art. After all, unlike bicycles, horses were flesh and blood and had a will of their own.

The Ustads taught them a lot on the first day itself. They started with instructions on saddling the horse, fixing the bit, and adjusting the stirrups. Then there was a brief on how to mount and dismount their steeds. The final session was on grooming the animals.

Excerpted with permission from Undaunted: