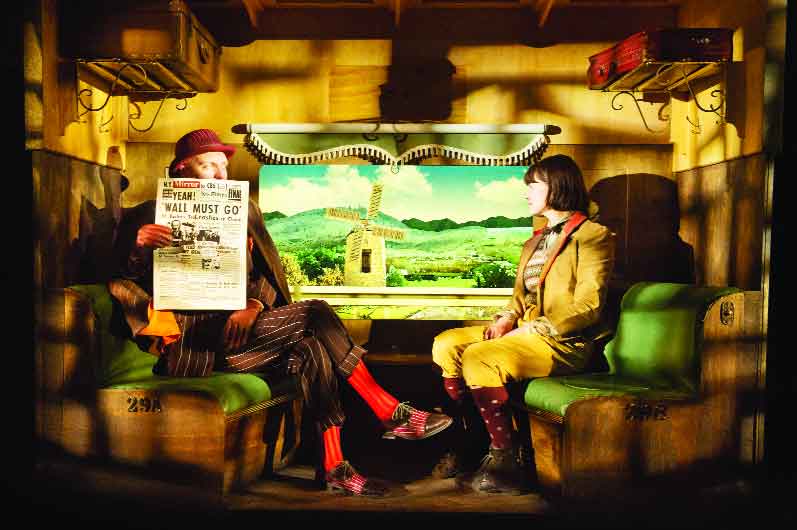 As Australian director Andy Packer adapts Erich Kästner’s play, Emil and the Detectives, in India, he tells that for an audience to engage with a story, it must in some way address an anxiety deep within them. By Chahak Mittal

Why did you only choose Erich Kästner’s Emil and the Detectives for your direction?

This production is Slingsby’s seventh. Previously, we have adapted a Grimm Brother story (The Mouse, The Bird and the Sausage), an Oscar Wilde story (The Young King) and created four completely original works including an opera. I was first attracted to the story of Emil and the Detectives because it is often referenced by great contemporary children’s authors like Philip Pullman as a real point of inspiration for them. The story is a great adventure for children and families but it also has some dark, truthful moments about the world we live in. The story is very honest for children about the wonder and strangeness of life. This mirrors Slingsby’s approach to making theatre for an audience that includes children and adults.

Slingsby is particularly interested in bringing ‘coming of age’ or ‘getting wise’ stories to the stage. We find that these stories often have the power of being immediately relatable to our multi-generational audience (aged eight+ including adults attending on their own and in groups) as well as being philosophical enough to be open to infinite interpretation.

When I read Erich Kästner’s Emil and the Detectives, I was excited by the way Kästner presents a world filled with good as well as flawed people. Even though this is a story for children, he had presented a complex world where happiness and sadness co-exist. This really struck a chord with what we are trying to explore with Slingsby’s work. To show that there is darkness in the world — but that it serves to make the light moments even brighter and more wonderful.

What was the challenge in setting up and creating an atmosphere of the late 1920s for the stage? How have you transformed the play to suit to the current generation?

The design of our production is inspired by several leading Australian visual artists of the 1930s, including John Brack and Charles Blackman. These artistes emigrated from Europe to Australia — in much the same way the story did. Using these artistes as inspiration gives the production a distinctly Australian look and feel with a European heritage.

What goes into transforming a written play into a stage performance?

Each new show has its own discoveries — we continue to explore new ways to work as a team and to refine our theatre making process. The starting point for a new Slingsby show is an image, an idea or a story that moves me. Something that I feel is epic enough to have a universal appeal across a wide age range. We need to find a story or an idea that has enough at risk for us to really care about and identify with the character in a high stakes way. Theatre is a compressed moment in time. For us to really engage with a story, it must in some way address an anxiety deep within us. This is why coming-of-age stories are so potent for us. As humans we are constantly evolving into a new phase of our lives, leaving part of our old selves behind and forging new grounds.

Once I have selected a book, an image or an idea to adapt to the stage, we bring together a team of artists to forge a loose idea into a new theatre production. The process for each of our seven productions has varied but for the last two shows (The Young King and Emil and the Detectives) we have commenced our development with a process we call ‘Paths Less Travelled’. This ‘theatre laboratory’ brings together our core team, Quincy Grant, Geoff Cobham and Wendy Todd along with one or more actors and sometimes a writer and other design collaborators. Through this two-week-long process, we experiment with the theatrical possibilities of the story or image. We really try to discover a new way to share this with an audience and dig into the philosophy of the piece. Through this, we hope to find failure as well as success. This is where we can take real risks. The aim of this process is to push theatrical form and find new ways to share time and space with our audience.

In the final stages of this process, we will often invite our ‘critical appraisal group’ to see the very early period of this work in development. It is a small group of peers and individuals that we respect and are confident in their ability to provide an outside eye to the development of each new show. This group will generally include a Board Director of Slingsby, a theatre maker, an educator and from time to time a young audience member. This group will see showings at various stages of the making of a new work and the final production — meeting with me at each stage to offer insights and feedback and to ask questions of me and for me to ask questions of them.

The next phase of development will often include commissioning a playwright to write a script informed by the initial idea, image or story along with the discoveries from the ‘Paths Less Travelled’ process.

Following the first few drafts of the script, we will undertake a second creative development with the cast — often involving a reading of the script to a young audience — to gauge their interest in the story and the language of the piece. This second stage development will always include Quincy Grant as composer, joining us in the room to contribute ideas and music as the piece develops. The scoring is forged as the piece is being blocked. There is then a constant dance and conversation between text, music and image as we make the work. This second stage of development can vary in duration between three days to two weeks — depending on budget, artist availability and how ambitious we are being with the form of the piece. Geoff Cobham and Wendy Todd (and other design creatives) are always welcome in the room during this phase and collaborate equally in a very open and integrated way. As a team we are all trying to find the best and most impactful and interesting way to stage each moment.

Where possible, we try to bring production and design elements into the room as early as possible – with ideas being generated and refined throughout the process. This differs from some other processes where the design may be set before rehearsals begin.

The final rehearsal phase for our productions is when all of the elements come together, final design and Geoff Cobham’s lighting are the culminating pieces to the puzzle. It is in this final process that Quincy Grant will coordinate the recording of his score and the integration of that into show control. The final stage is balancing all of these elements. Meticulous attention is given to balancing sound, image, text and live performance. This is when a new Slingsby show is born. The audience is the final and most important ingredient. With each successive one our understanding of the show grows and we continue to refine the production after each performance. Even with The Tragical Life of Cheeseboy, which we have performed, well over 250 times we still refine moments following every performance. Perfection is ephemeral if not an illusion.

Emil’s character is very young. How did you script the role in such a way that people find it relatable?

As soon as I decided to adapt Kästner’s story, I decided I wanted to cast Elizabeth Hay. It was because I feel that the character of Emil is a hero and that the gender of the character is not relevant. This is a child’s story of discovery and not a boy’s or a girl’s — simply a child’s. Emil’s gender is never mentioned. I hope this allows both boys and girls to identify with the character. Elizabeth is a wonderful actor and has the ability to convey the wide-eyed innocence wonderfully. She is an adult (we are a touring company so it is very difficult to tour with child artists) but is able to embody that discovery of the world without overplaying it. And it is more about playing the character and not the age.

Are there any particular additions that you have made in your script to suit the Indian audience?

We keep our focus on the audience. We have not adapted anything specifically for India. I believe that the audience is similar across the world. We have toured 11 other countries and have had similar responses wherever we tour. We are very excited to be in India for the first time.

The play is a funny as well as a smart story about how a group of children finds their way. Given its universality, how did you end up choosing costumes and crafting dialogues?

Often is it the action and the fun of a situation that makes an audience laugh, rather than just the dialogues or jokes. The show has a lot of physical action — children and adults often find this to be a lot of fun. We have not modernised the story at all, we still refer to and use rotary telephones and the design is inspired by the 1930s. We find that the young audience really enjoy being invited into a world that is strange, mysterious and new to them but full of details. If the story is relevant to their emotional lives, it holds their attention.

Are there any particular literary plays or playwrights that you take inspiration from?

For this production, I have been very inspired by Hitchcock and Buster Keaton. We began by trying to tell this story without any words, but we discovered that we still needed narration and some dialogues to drive the story forward. However, much of it is non-verbal.

Anything that you ideally look for in a play and try to incorporate in yours as well?

It’s great to see the audience moved emotionally by our performances. I also try to make that happen. I want Emil and the Detectives to be fun and full of laughs but at the same time want the people to possibly relate to the sadness and perhaps shed a small tear. If something like that happens through a theatre performance, it surely implies that we are watching something important.

I want to give the people a surprising and delightful experience, and something that moves them. And through this, I want them to feel connected to each other, to our production and to have developed a greater empathy for each other. The play is all about meeting people, becoming a community, and being there to support each other.

(The play will be staged on January 13 at Siri Fort Auditorium.)