A Scorsesean view of Dylan

A Scorsesean view of Dylan 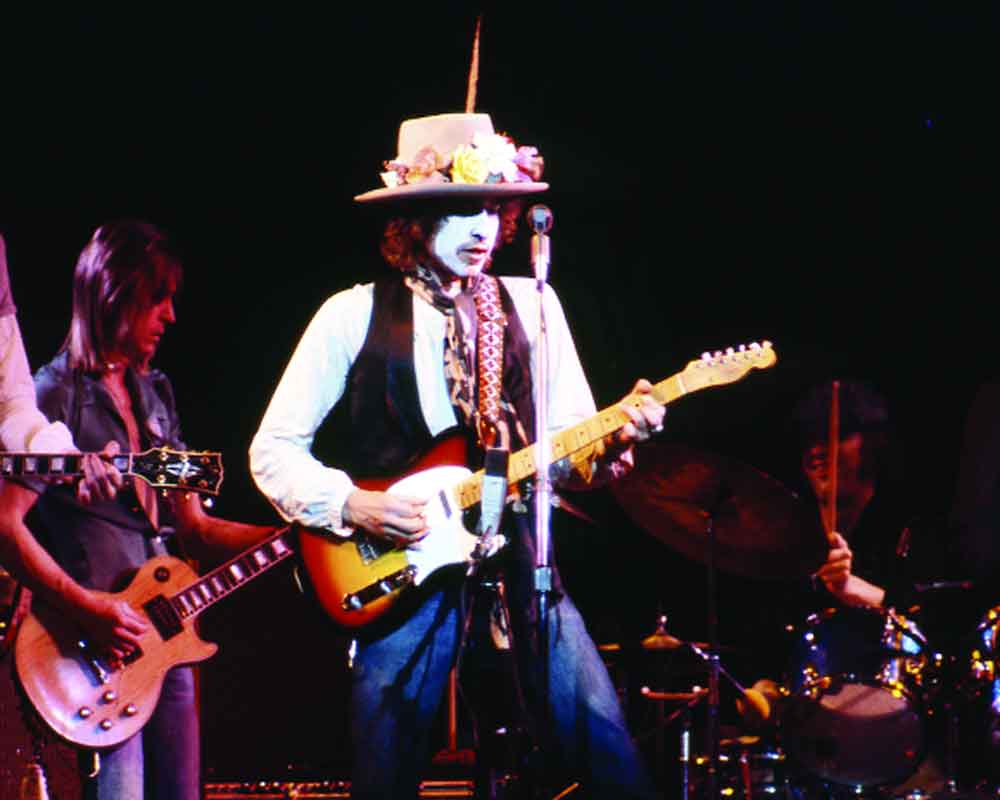 Filmmaker Martin Scorsese’s documentary gets up close and personal with the iconic singer and the way he engaged with the audience while on tour. By Team Viva

Bob Dylan admits he doesn’t remember anything about the Rolling Thunder Revue, a 1975 concert tour by the American singer and songwriter. He says it had happened a long time ago when “I wasn’t even born.” He finds it impossible to get to the “core” of what it was about because “it’s about nothing.”

Filmmaker Martin Scorsese’s pseudo-documentary Rolling Thunder Revue begins with this sequence to try and delve into the phenomenon that was Dylan.

The footage that has been utilised in the film was shot by some incredible director-cameramen — Dave Myers, Howard Alk and a few others. “How do you talk about something that happened 40 years ago? Music is such an important part of his creative life” and goes on to add about the tour, “which I don’t know much about but I sensed that there was a negative response to this tour. I didn’t quite understand it. People complained about something that Dylan did. The footage that I saw was captured from the stage. It was remarkable but what’s the story? What are we telling? I received the assembly of this film and remember watching it. It’s conventional,” he says and goes on to add, “But what is it really about? Why do I care where they went? It’s nothing to ignore. It is something that can move us, and make us think, make us feel before you even think. It has to be preserved and captured and be reminded that it is possible.”

Scorcese points out that despite Dylan saying that he did not remember the tour, there was something special both about the singer as well as the concert. “There's a mythology that grows up about it, so let's embrace the mythology. This is not a legend, this is kind of myth, kind of supposed to explore something that is timeless about us as human beings. There’s one shot of a young woman crying, after the concert. To have something that, touching, that moves you so much, that was real at that time. It's nothing to ignore. That if something can move us, and make us think, make us feel before you think, even. That's something that has to be preserved and has to be captured and be reminded, audiences today they have to be reminded of what that's possible.”

Talking about what drew him to the music of Dylan, Scorcese says, “I have seen Dylan in concerts just once or twice in all these years. My concentration was always on cinema, its music and literature. The films that are still stuck in my mind are Jazz On A Summer’s Day, Rock ‘n’ Roll, there used to be Doo-wop and other things as well but somehow it was all about music. It was captured in a way that I don’t think will ever find an equal. The key was staying on the performer because all the magic and that element of the music that transcends the situation comes from the performer. I was completely drawn into that music world, so to speak, with The Last Waltz. It’s as if that after a certain performance, especially as the concert moves on and they warm up, it’s like being around in a fight for prize and they all got through it. ‘Ok, take a break, round 5!’ Then they go back in and soar. They take off and I thought to capture the essence of that beauty of their art. It’s like a wild, spiritual experience,” Martin says.

Talking about what truly drives him and how he is able to channelise it to great storytelling, he explained that it is intense and personal and also a spiritual experience for him. People say that that he is different from all the other directors and knows how to create magic. He says, “You know, when they say, ‘Well, directors create magic.’ I don’t really think so. Because it’s more than just that. I don’t see directing films as magic, I see that as the nature of the film. There’s an element to the tour that has a sense of fun. You do something to the audience, open their minds, so that they don’t expect the normal things or the ‘conventional.’ You don’t make it predictable.”

The filmmaker, who is known for his mafia films, tells us where his fascination for the mafia world comes from. He says, “I grew up in Little Italy, a small area in New York, where primarily Italian-Americans, Neo Politians, Sicilians and all kinds of different Italians who, came over to New York on the turn of the century, reside. Growing up there, I saw a lot of very decent people, good and hardworking ones getting into the mafia trap. The area became a transposition of the mafia or the organised crime from Sicily to New York and to America that actually came from New Orleans.  So I grew up amongst them. I was seven to eight years old and it seemed to me that they were normal, regular people. You couldn’t tell as they were very sweet.”

Martin is known to be doing impressions of Robert De Niro during the shooting of Cape Fear. “I don’t really do impressions of Bob (Robert). I don’t know what happened over the years. We melted in each other. There’s one that I really like and it’s from Goodfellas, it’s become part of my mantra in the sense, it was a scene where Frank Vincent playing Billy Batts really gets under Joe Pesci’s skin by calling him ‘Go get your shinebox’ and at that point, they have to pull Joe away from him, screaming, kicking. Then, Frank says what the hell is matter with him, you know, what’s the big deal, can’t he take a joke and so Bob he is about to have a drink and he goes, ‘Well you did insult him a little bit’ and then Frank says, ‘No, I didn’t’ (laughs). I always do that, ‘you did insult him a little bit and okay, okay let it go.’