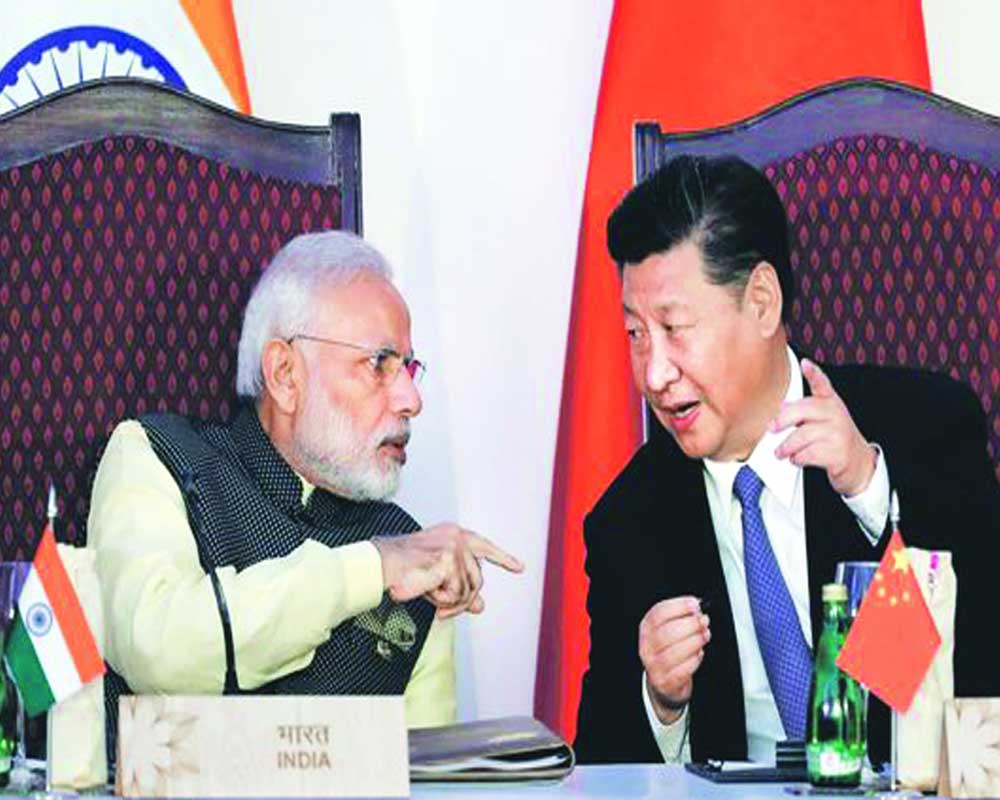 Compared to China, which is assertive and has undertaken innovative developments, India is definitively trailing. Preparation for any eventuality is the way forward to counter its rise

There is no doubt that 2019 has been a special year for China: Lavish events were organised to celebrate the 70th anniversary of the founding of the People’s Republic of China (PRC). In 1949, from the rostrum of the Tiananmen Square, Chairman Mao had announced, “China has arisen.” On October 1, 2019, Chinese President Xi Jinping was on the same wavelength as his predecessor when he said, “No force can ever shake the status of China or stop the Chinese people and the nation from marching forward.” On that day, Beijing displayed several futuristic military gadgets.

On December 29, the Global Times listed China’s advanced weaponry. It said, “the year 2019” has been a “year of harvest” for China’s military equipment as the country showcased a “massive selection” of the latest, advanced and powerful weapons that operate on land, sea and air. It is not only in the field of advanced armaments that Beijing has been “doing well” but in this domain, the progress is indicative of an assertive China and of the innovative developments undertaken by Beijing. Comparatively, India is definitively trailing. Even though the communist party’s newspaper observed, “These displays of China’s new weapons showed transparency in the country’s military development” and sent a message to the world that China was determined to “safeguard sovereignty and peace,” the fact remains that China is still preparing itself.

Last week, in the Port of Dalian in Liaoning Province, China launched the country’s 23rd Type 052D and the sixth Type 055 destroyer. Experts said “the ship was one of the world’s largest and most powerful destroyers” and was capable of leading a high sea fleet or becoming the “pillar in an aircraft carrier battle group”, said the Global Times.

The Global Times quoted military experts as saying, “2019 will not be the end of China’s military equipment development. More weapons are expected in 2020 and beyond.” But there is another side to the coin. President Xi has been facing a rough sea at home. The fourth plenary session of the 19th Chinese Communist Party’s Central Committee was held in Beijing from October 28 to 31. The members discussed the work report presented by Xi and adopted it “to uphold and improve the system of socialist rule of law with Chinese characteristics and improve the party’s capacity for law-based governance and law-based exercising of state power.”

The communiqué mentions, the nation is facing “increasing challenges at home and abroad.” The gathering upheld the principle of “one country, two systems,” maintaining lasting prosperity and stability in Hong Kong and Macao, and “promoting the peaceful reunification of China.”

Despite the serious difficulties faced by China, India needs to be prepared to respond to its rise. But first, let’s talk about what India should not do. The two-day meeting between Prime Minister Narendra Modi and President Xi Jinping at a resort in October in Mamallapuram was an occasion to talk about “civilisation.” But was it of any help?

As it is, during Nehruvian days, India was fond of this hazy concept. The dictionary thus defines the term as “an act or a process of civilising, as by bringing out of a savage, uneducated, or unrefined state, or of being civilised.” Already, in the 1950s, this great “idea” allowed the Indian leadership to “dream” of lofty principles such as peaceful co-existence, while China was quietly consolidating its presence on the Tibetan plateau and preparing for a war with India.

Today, India should look after its own interests and forget about vague idealistic concepts. It should learn from the Chinese leadership, which has always remained pragmatic and down-to-earth. Unfortunately, when India speaks about its past, it does so to avoid talking about the present. This is what may have happened between India and China during the two-day encounter at Mamallapuram. Though it is not known what went on for two-and-a-half hours during the one-to-one dinner composed of exotic Tamil dishes, very few concrete decisions seem to have been taken. The Indian foreign secretary affirmed that the “K” word was not pronounced. This is regrettable for the occasion was opportune to clarify the Indian position.

One positive outcome from the meeting was the decision to establish a high-level economic and trade dialogue mechanism “with the objective of achieving enhanced trade and commercial relations, as well as to better balance the trade between the two countries.” This can, hopefully, help rebalance the trade deficit — today in India’s disfavour.

An example of a positive pragmatic policy for India has been the creation of the post of Chief of Defence Staff (CDS). A day before the end of the year, the Government finally nominated Gen Bipin Rawat, outgoing Chief of Army Staff, as the first CDS “to drive the desperately-needed integration among the three services.”

But why did we have to wait for one day before the end of Gen Rawat’s tenure to see his name released? There was probably an intense lobbying from the babus to preserve their turf.  The history of modern India is a Mahabharata between the progressive forces, which want to change “eternal Bharat”, and the entrenched administration sticking to their privileges.

To win this battle would be the best way to counter China. As Rawat was handing over the baton to Gen MM Naravane, his successor, he was asked a question: Is the Army better prepared today to face the security challenges than when he took over? Gen Rawat replied, “Yes, we are better prepared.”

Preparation for any eventuality is the way forward to counter the rise of China. At the same time, India needs to continue investing in infrastructure, telecommunication systems, roads, airports and border areas while also providing a decent living and empowering frontier populations. In the future, Artificial Intelligence (AI), latest telecommunication means and new technologies should be indigenously developed if India does not want to be left behind. Only then will China respect India and will not be tempted to engage in an adventure like it did in 1962. This is a tough agenda for 2020.