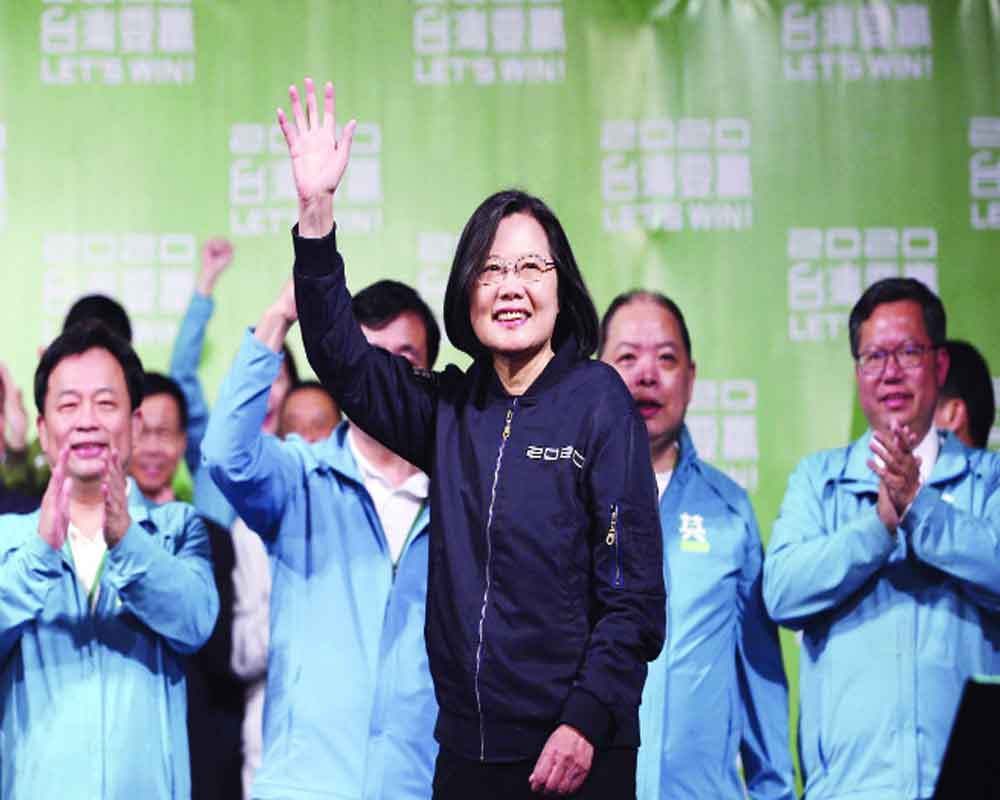 Tsai’s presidential poll win and the Hong Kong local elections last year show the weakness of the Chinese regime, which remains dependent on propaganda and influence to bully its neighbours

The just-concluded presidential and legislative elections in Taiwan might remain a turning point in the life of not only the island but  the entire region. President Tsai Ing-wen of the Democratic Progressive Party (DPP) defeated Han Kuo-yu from China-friendly Kuomintang by more than 2.5 million votes (57.1 per cent for Tsai and 38.6 per cent for Han). The former became the first-ever candidate to capture more than eight million votes. James Soong Chu-yu, chairman of the People First Party (PFP) close to China performed poorly with only 4.2 per cent of the votes. More than 14 million (out of 19 million eligible voters) participated in the vote, which also saw the DPP retain its majority in the legislature, winning 61 out of 113 seats.

Many observers saw this as a slap in the face of China and its President Xi Jinping. The problem for Beijing is that this is a second debacle in a row — in November 2019, the Hong Kong District Council elections were held for 18 seats when a record 71 per cent of the electorate had voted. The election was viewed by many as a referendum on pro-democracy protests that continued for six months. The results came as a jolt for Beijing; the Communist regime had never expected a “tsunami” in favour of the pro-democracy movement, which took control of 17 of the18 district councils.

At first, it looked as if Beijing did not know how to react. According to The South China Morning Post: “Xinhua waited [two days] to release a two-paragraph news report on the polls. It only stated that the elections took place and 18 districts produced results.” The next day, the People’s Daily went on talking about the history of US intervention in foreign elections. In the weeks preceding the elections, the Global Times repeatedly claimed that a “silent majority” in Hong Kong was condemning the protests.

An important common factor, the country’s mobilising youth, has been pointed out by Juang Wen-jong, professor of public policy and management at Shih Hsin University in The South China Morning Post: “Young people — or those between 20 and 39 — were the key to the weekend’s elections as they made up at least 6.6 million of the eligible voters in Taiwan… They helped bolster the turnout rate, which helped increase both the vote for Tsai and her party.”

Many considered the Taiwan’s presidential election to be a proxy contest about its national identity. This probably explains why Beijing was not amused. What has made matters worse for China is that many countries sent congratulatory messages to the new Taiwanese President. “China cried foul, claiming that their actions violated the ‘one-China’ principle,” wrote the Taiwan News.

The Taiwanese Ministry of Foreign Affairs (MoFA) had announced that officials from some 60 countries had greeted Tsai via phone call and email. It included US Secretary of State Mike Pompeo and Japanese Foreign Minister Toshimitsu Motegi. “In a released statement, Pompeo congratulated Tsai on her well-deserved win and praised Taiwanese voters for demonstrating the spirit of democracy.”

The word “democracy” makes China see red. China’s Foreign Ministry spokesperson Geng Shuang spoke of elections in “Taiwan region of China” and asserted that it was a “sub-national affair in China.” He added that Beijing deplores and firmly opposes “those countries” which violate the “one-China principle” by “offering the congratulations and lodged solemn representations.”

Geng declared that Beijing opposes any official relations between “the Taiwan region” and countries that have diplomatic ties with China. He asked these countries to deal with the issue “properly and with caution to avoid sending the wrong message to Taiwan’s independence forces.”

Beijing’s Taiwan Affairs Office (TAO) released a communiqué asking Taipei to adhere to the “1992 consensus” between China and Taiwan. Ma Xiaoguang, the TAO spokesman, said: “Our political policy towards Taiwan is clear and consistent. We adhere to the basic principles of peaceful reunification; one country, two systems and one China.” We will resolutely safeguard China’s sovereignty and territorial integrity, resolutely oppose any plot or act of “Taiwan independence” and resolutely promote the interests and “well-being of Taiwan compatriots.”

At the same time, Xinhua blamed Tsai and the DPP of using “dirty tactics such as cheating, repression and intimidation to get votes.” The official news agency claimed that it exposes “their selfish, greedy and evil nature.” In a Chinese language op-ed, Xinhua even accused Tsai of “buying votes and blamed the election results on external dark forces.”

The “dark forces” are obviously the “West”, which has sinned for “inventing” democracy (incidentally, is it the West which “invented” the “evil” democracy? Serious historians believe that elected village councils existed in India centuries before it was introduced in Ancient Greece).

The “two slaps” show the weakness of the Chinese regime, which depends too much on “propaganda” and “influence” to bully its neighbours — whether “Chinese ones” like Hong Kong or Taiwan or foreign ones such as Australia, Vietnam or the Philippines.

Once again, the billions of dollars used to change the mind of the voters did not help Beijing.  To the contrary, it looks as if it had the reverse effect and this may not change in the near future. Beijing is facing a dead end without even realising it.

Chinese leaders are unfortunately incapable of changing their tactics. Chinese Foreign Minister Wang Yi, who was recently in India to discuss the boundary issue with the National Security Advisor, went on the same old track. In Zimbabwe during an African tour, Wang affirmed that Tsai’s win would not stop Taiwan’s reunification with the mainland: “A local election on the Taiwan island will [not] shake [China’s determination] despite erroneous words and actions by some Western politicians… The rejuvenation of the Chinese nation and the reunification across the [Taiwan] strait is inevitable. Going against the trend is bound to reach a dead end. Anyone separating the nation will stink for 10,000 years.”

Well, the human spirit for freedom and the aspiration to choose one’s own destiny is also difficult to suppress or extinguish. It is true not only for Hong Kong or Taiwan but places like Tibet and Xinjiang, too.

According to the official Tibet Daily, on January 12, the legislative branch of the Tibetan Autonomous Region voted in favour of new regulations to “strengthen ethnic unity” in Tibet. Four years ago, similar rules were introduced in Xinjiang. It was later used to justify crackdowns on the Muslim Uygur minority. But once again, it is not easy to tame the human spirit and change the hearts of the masses. Beijing will have to learn one day.