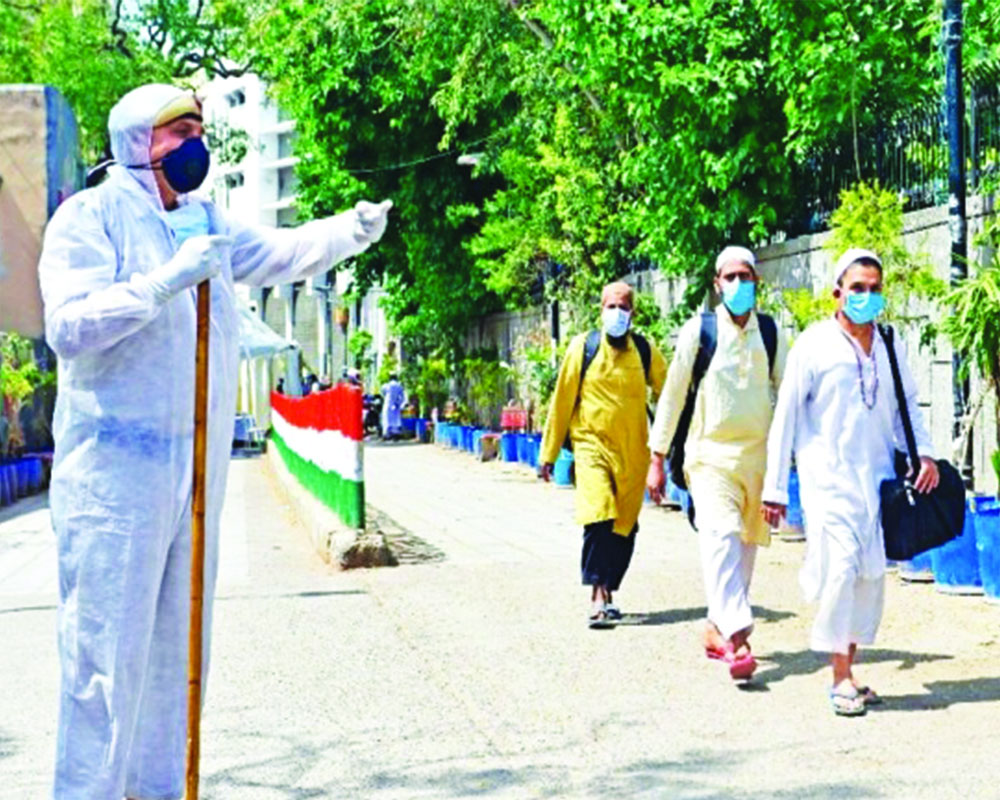 An ill-advised section of Muslims is disregarding precautionary measures against Corona, thus imperiling safety. There’s history but no reason why that view should guide their choice

Does it seem like a déjà vu? In December 1849, cholera was detected in Beylik of Tunis  (now Tunisia). Ahmad I ibn Mustafa (1805-55), a progressive ruler, left the capital city of Tunis terrified. He moved to a gardened villa of the then Prime Minister Mustapha Khaznadar in Carthage along with a personal retinue and armed guards. From his new camp office, he deployed Italian doctors from nizam jadid (new European-style Army of Tunisia) for treatment in temporary hospitals set up in the barracks. Daily statistics of the infection, deaths and recovery were compiled, which along with instructions of hygiene, were printed in Italian and Arabic language. These were distributed in the mosques and churches for the edification of the people.

Then came the inflection point during the Mawlid al-nabi (the Prophet’s Birthday), which fell on January 27, 1850. Ahmad I ibn Mustafa was in dilemma regarding the celebratory congregations and the advisability of his joining them in view of the outbreak. Ultimately, he sent a communiqué, ordering the celebrations to be held as usual and for oil to be sent to the minarets. The event was held; canons fired; and two verses of the Quran were read to “comfort the people in times of difficulty.”

Within days, the epidemic was raging the Muslim quarters, and before long, the entire city of Tunis was in the grip of cholera. Muhammed Sharif, a notable figure of Tunis, passed away on February 6, which was followed by the death of several of his family members and those who had come in contact with him. This incident has been described by Nancy Elizabeth Gallagher in her insightful book, Medicine and power in Tunisia, 1780-1900  (1983, CUP).

The worst was yet to come. The epidemic polarised public opinion in Tunis. Many blamed the European doctors, by extension, their line of treatment. Several doctors were abused and manhandled. Ahmad I ibn Mustafa, advised by his personal Italian physician, Abraham Lumbroso, put himself in medical isolation. His extreme measures annoyed some of his Ministers. One day, a Group of Ministers politely told him that precaution by means of quarantine was nowhere to be found in Islam and is an invention of Christendom, whose knowledge of diseases and medicine is inferior to Islam.

The debate over the propriety of quarantine took a theological turn. Prime Minister Khaznadar, a critic of European medicine, condemned the quarantine and declared that Muslims, who died of cholera, were martyrs. Bin Dayaf, Ahmad I ibn Mustafa’s personal secretary, opined that self-preservation by quarantine was legal and no religious text disapproved of it. The two reached out to a certain cleric. Tayyib Al-Riyahi, son and expected successor Ibrahim al-Riyahi, Imam of Great Mosque of Tunis, issued a fatwa that victims of cholera were martyrs by citing the Hadith of Muwatta (the Maliki law book) because they died of internal wounds. Then Khazandar and Bin Dayaf went to Mufti Muhammed bin Salama, who ruled that victims of cholera were not martyrs. At this point, Bin Dayaf ended his discussion by observing that whatever be the reality, even “alims (scholars of Islam) die of cholera.”

Combating communicable diseases has often been vitiated by theological considerations and confrontations in the past. It took almost four centuries for the Ottoman Empire to have a quarantine policy. Sultan Mahmud II,  advised by his Austrian doctor, Anton Lagos, and impressed by the treatise of Hamdan Bin El-Mehrum Osman Hoca, finally adopted quarantine as a measure to combat plague in 1838 even as the disease had bedevilled the Ottoman Empire at least since the mid-15th century. No doubt, had there been men like Idris-i Bitlisi, an Ottoman statesman, and Isameddin Ahmed bin Mustafa Tasköprüzade, a prominent judge way back in the 16th century who advocated a rational approach, there would be precedence. There were prominent medical doctors like Osman bin Suleyman Penah (d.1817) in the reign of Selim III, too. They advocated that quarantine and precautions against plague and epidemic would signify betrayal of Muslim’s trust in divine fate (tevekkul).

Birsen Bulmus, in his eminently readable, Plague, Quarantines and the Geopolitics of the Ottoman Empire (2012), traces the history of health and medical policies against plague and allied epidemics in the Turkish reign. Bulmus exhibits how it was not only Muslim divines and physicians who doubted quarantines/precautions but in reality, whatever kills a Christian also kills a Muslim. Whatever cures a Hindu, cures a Muslim as well. Physiology is more egalitarian than theology.

The holy city of Mecca was affected by cholera in 1831, which recurred almost annually during the pilgrimage. Its invasion was particularly serious in 1865, when almost a third of the pilgrims reportedly perished. It was the most dominant issue at the International Sanitary Conference at Constantinople (Istanbul) in 1866. A six-member committee, comprising Arabs and Europeans, drew up a report to regulate the maritime traffic for Hajj pilgrimage in 1867.

Thus, if Saudi Arabia has now put Mecca and Medina under lockdown and is contemplating on deferring the annual Hajj scheduled for July 28-August 2 due to the COVID-19 outbreak, it is only because they know their history better. Mosques are likewise closed to congregations in India. The Ulema has appealed the Muslims to tender namaz at home, including on Friday.

However, the irresponsible behaviour of a section of the community in India is putting its collective safety against COVID-19 at great risk. The Tablighi Jamat’s grand event at Nizamuddin Markaz Masjid between March 13 and 15 has led to a huge spike in Coronavirus cases. Though there was no lockdown in India at the time of the conference, the Delhi Government had already prohibited all types of gathering above 200 people by then. They continued to hold back more than 2,000 participants in a six-floor dormitory long after the event had ended. The management refused to buckle even after receiving notice from the Delhi Police. It took 36 hours to evacuate 2,361 people from the premises to put them into hospitals and quarantine centres.

The misinformation campaign over Tik Tok, targetting impressionable young boys from the Muslim community to throw caution to the wind, is sinister. Those paying heed to such evil counsel will jeopardise their own health before they risk someone else’s. If Muslims had really been depending upon the divine will for health instead of modern medicine all these years, the hospitals in Delhi would not have a large percentage of them. Nor would the super speciality hospitals in India receive a large number of “medical tourists” from Afghanistan, Iran and Central Asia, among others. Muslims, like anyone else, wear woollen clothes when it is winter and shed them in springtime. Why pass on all responsibility to Allah in the COVID season?

As Ahmad I ibn Mustafa had said in 1850 cholera season, “If divine decree and fate arrive and I die with the disease, I fear I would say, ‘if only I had observed quarantine, this would not have happened’ because of my belief that everything comes from Allah.”

(The writer is an independent researcher based in New Delhi. Views are personal)