9.9 lakh lt liquor seized in dry Bihar ahead of election

9.9 lakh lt liquor seized in dry Bihar ahead of election 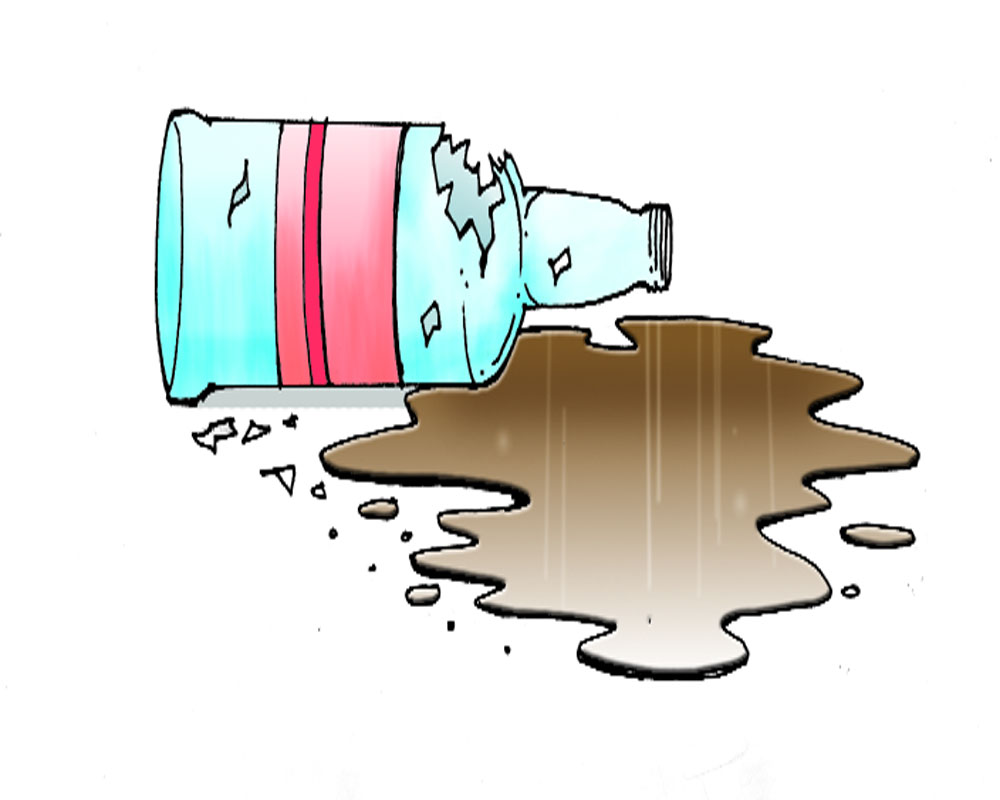 Despite prohibition imposed in the State, over 9.89 lakh litres of liquor have been seized in Bihar so far ahead of the first phase of polls for 71 Assembly seats. And not just booze, authorities have also seized 1,139 illegal guns from across the State, known for its illegal gun factories.

While more than 2.54 lakh people having criminal background have been put on notice, there has been a seizure of Rs 16.81 crore of unaccounted money, including about 90 lakh Nepalese currency. Raids and checks have also yielded a huge quantity of contraband drugs including 956.625 kg poppy, 106.825 kg hashish, 10.5 kg poppy rolls, 40 packet smacks, 150 gram brown sugar.

The revelation was made in a seizure report of the Election Commission (EC).  Over 200 “expenditure sensitive pockets” have also been identified by the EC in the State, which shares its borders with Nepal.

The flying squads, static surveillance team and other agencies have seized 9,89,973 litres of liquors including “mahua” (Madhuca indica) made liquor from different locations, mostly rural areas.

This is the first assembly polls in dry Bihar.  “The liquor mafia in the dry State has suddenly become more active in smuggling alcohol as it is often used by politicians to lure voters”, officials added.

“The drug consumption has significantly increased after a statewide ban has been imposed on alcohol. As a result, an increase in the secretive supply and sale of narcotics like brown sugar has been observed,” officials said.

The income tax flying squad has recovered Rs 16,81,29,023 unaccounted money, of which about 90 lakh are Nepalese currency notes.

The special surveillance team and field surveillance unit has recovered about Rs 11.72 crore during checking of vehicles from different locations.

“More than 2,100 gun licences have been cancelled,” said an EC official. About 2,56,447 having criminal backgrounds or bad characters  have been put on notice across the State. This means if anything happens, they would be behind bars.

To maintain law and order, the authorities have acted against 2694 people under the crime control act. The police have registered 203 cases for violation of model code of conduct including 84 Illegal gathering and luring voters. Interestingly, a large number of sim cards were also recovered during checkings.

According to the EC, 91 ‘expenditure sensitive’ constituencies of Bihar have been identified based on both the profile of the constituency and the candidates in the fray. As per the data, as many as 319 out of the 1,066 contestants in fray in the first phase of polls having a criminal record. 71 constituencies situated in 16 districts are going to polls on October 28, the first phase of the three-phase elections for the 243-member Bihar legislative assembly.

During the 2019 Lok Sabha polls, the EC had seized Rs 9.12 crore black money, 1.24 lakh litre liquor, 717 kg drugs and 62 kg precious ornaments and jewelry from Bihar. In the Assembly elections in 2015, seizures worth Rs 23.8 crores were registered by the EC machinery with Rs 19 crore of cash found circulating besides 5.48 lakh litres of illicit country- made and foreign liquor from different places in Bihar.