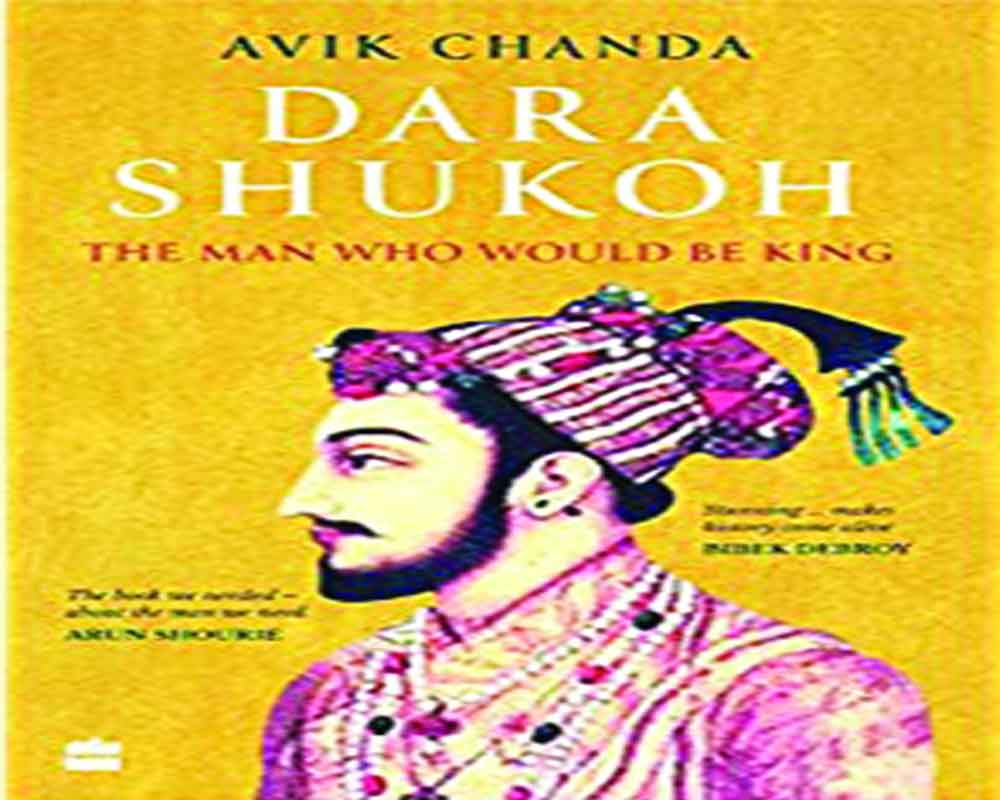 Name : DARA SHUKOH: The Man Who Would Be King

Avik Chanda’s book, Dara Shukoh: The Man Who would be King, is an ideal read, not only for aspiring historians but also for those interested in Indian history, writes Kumar Chellappan

A frequently heard complaint from a section of Indian historians is that vested interests have played havoc with the sub-continent’s history, traditions and culture. If one goes through the history books taught in the Indian schools and universities, it will be found that those lamenting over the tampering of India’s history are not exaggerating. Some sections of the country’s valuable history have been suppressed from the new generation, especially from those who were born after 1950.

How many among those who were born after 1950 are familiar with the great Maratha ruler Shivaji, the valiant fighter Tantia Tope, the great social reformer Mahatma Phule, the all time great of the 19th century South India by name Chattampi Swamikal and his colleague Sree Narayana Guru?

We cannot put the entire blame for distorting history upon previous regimes alone. It is a strategy deployed since time immemorial to misinterpret historical facts by groups with vested interests. “History is written by victors,” Sir Winston Churchill, former British Prime Minister who is known for his erudition and knowledge had said. In modern times, it was proved by the British colonialists. The best example is Louis Mountbatten’s decision to destroy even the last vestiges of victory symbols of the Japanese army from Singapore and Malaysia.

“After re-taking Singapore, Mountbatten’s (who was the Supreme Commander, South East Asia during Second World War) first act was to order the demolition of the war memorial honouring slain heroes of the Indian National Army. The INA War Memorial at Singapore to commemorate the “Unknown Warrior” was started on July 8, 1945 at Esplanade Park. It was razed to the ground by Mountbatten’s allied troops when they reoccupied the city. Demolishing memorials, war memorials and other revered symbols of defeated people is habitual Christian triumphalism as is desecrating the tombs of the rulers of conquered people,” writes Radha Rajan, one of the highly respected thinkers of our times.

Most Indians are not really serious about learning history. They are not even bothered about recent history as can be seen by the attitude of the new generation towards the dark days of emergency declared by the former Prime Minister Indira Gandhi in 1975.

I was shocked to see the larger than life flex boards with pictures of Fidel Castro and Che Guevera greeting the delegates of Indian Science Congress during the 2009 Indian Science Congress held at Thiruvananthapuram. There were no pictures of Sir C V Raman, Prof J C Bose, S N Bose and the likes who took Indian science to new heights. But for ISRO, which co-sponsored the event, there would not have been a single picture of that prince of Indian Space Science, Vikram Sarabhai.

This is not the case with science alone. How many among our new historians are familiar with the works of the great Acharya Ramesh Chandra Majumdar, whose seminal work the eleven-volume History and Culture of Indian People preserve and protect the great history of this great nation from getting tampered by the evil designs of people following imported and outdated ideologies?

Dara Shukoh, son of Shah Jahan, was the unsung hero of the Mughal Dynasty. Dara, the eldest son of Shah Jahan lived only up to the age of 44 years but left indelible marks in the history of the sub continent.

What makes him dear to the people in Mughal empire was his tolerance towards other religions and humane nature, unlike his younger brother Aurangzeb, who went on to become the Mughal ruler presiding over the kingdom till the ripe age of 89!

Aurangzeb was known for his hatred towards Hindus and went on demolishing and destroying the Sanatana Dharma and its symbols like temples, ashrams and monasteries. Though the secularists tried to portray him as a philanthropist by hiring the services of Audrey Truschke to come out with a volume by name Aurangzeb: The Man and Myth, it fell all flat as she could not counter the eye witness accounts of Francois Bernier (a European physician and traveller in Shah Jahan’s court) and Niccolao Manucci (a military strategist for Dara, who continued to work with Aurangzeb after the fall of the former).

Dara in his brief tenure as prince had got the Vedas and Upanishads translated into Persian and French and this itself speak volumes about his compassion for anything that originated in the sub continent. Who in India would have heard about Bernier and Manucci if it had not been for S L Bhyrappa who in his famous work Aavaran told the readers about the official eye witness accounts of these two Europeans?

Avik Chanda, a business advisor with degrees from Delhi School of Economics, has taken from where Bhyrappa left.

Chanda’s book “Dara Shukoh :The Man Who Would Be King” is a refreshing experience. Chanda gives the readers a bird’s eye view on the life and time of Shukoh, the designated heir of Shah Jahan. Even as a young prince, Shukoh wanted the common man to know more about the Islamic saints and for that he opted words instead of swords unlike Aurangzeb and Tipu Sultan. “What Dara was striving for was not linguistic and literary brilliance but a tone of simplicity, an idiom that would induce faith in the reader who was a common man,” writes Chanda (Page 51). Thus was born Safinat-ul-Aulia, an account of the lives of over 400 saints!

The account of Dara Shukoh once again underlines the fact that the Muslim invaders who occupied the thrones in New Delhi and elsewhere in the subcontinent chose this land only to loot and proselytise. The Sufi saints were Islamic evangelists who went ahead with their mission by singing about love and preaching the message of anarchy. Despite the fact that he belonged to the Mughal dynasty, Dara had some civility in his heart unlike his forefather Babar or sibling Aurangzeb. Those who are out to paint Aurangzeb with divinity may need more self styled historians like Audrey Truschke because we have writers like Avik Chanda for digging out the truth.

Dara Shukoh: The Man Who would be King is an ideal work not only for aspiring historians but for general readers interested in Indian history.