Celebration of a genius

Celebration of a genius 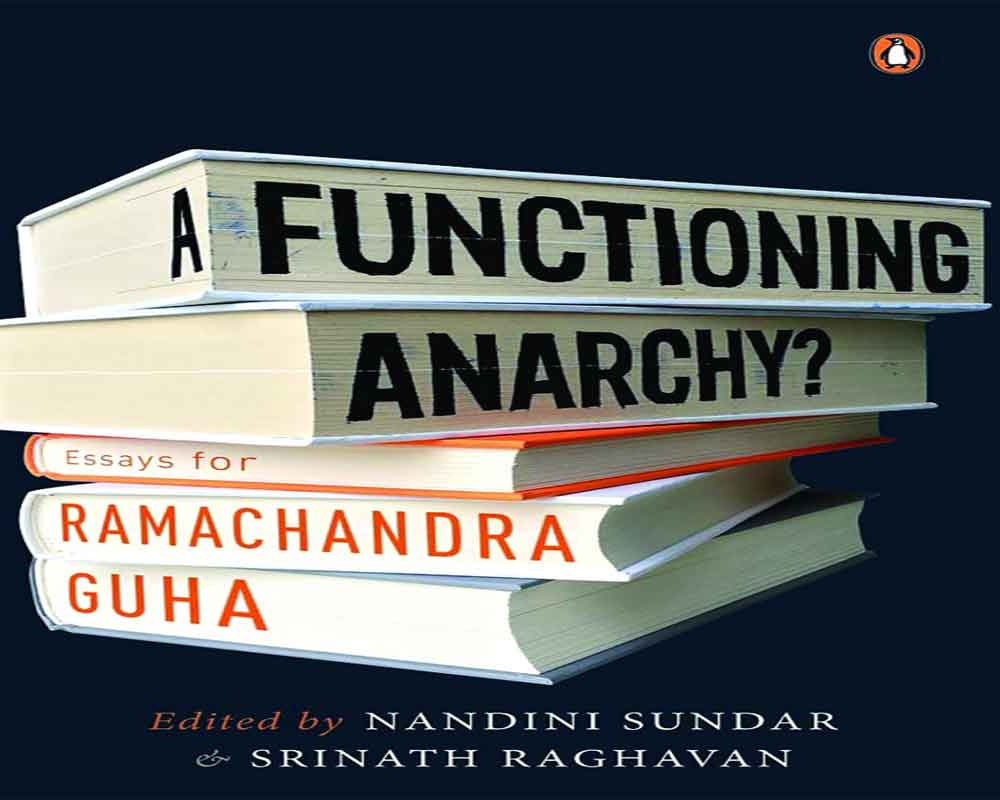 A Functioning Anarchy? is a discovery of Ram Guha’s inspiring life & career as much as an intellectual discussion of the ideas that shaped him & those shaped by him, writes Manas Sen Gupta

Some 100 years from now, should ours remain a nation where people are able to speak freely, one of those unanimously extolled would be Ramachandra Guha. His is a name that is held in high regard in liberal circles — a collection which can broadly be identified by its thirst for knowledge, emphasis on rationality, opposition to fundamentalism, and a desire to stand with the subaltern. Guha is, in today’s India, one of the most erudite scholars and among the wisest columnists. He is an intellectual icon in the eyes of those who are concerned for democracy and, contrarily, a controversial figure for those who hold a divergent view to his idea of India. And sometimes Guha may himself express opinions that even those who share his esoteric vision might not be willing to align with. Yet he has continued to remain steadfast on his ideas and ideals — a trait that has earned him a kind of unparalleled repute that few can boast of.

Whether or not one may agree with his thoughts, Guha’s life and vast career have continued to inspire generations. Over the past 35 years of his stellar career, Guha has written about environment and equity, of pioneers such as Mahatma Gandhi and Verrier Elwin, on India’s political and social dynamics, and several political essays. And while his popular image might be that of a sociologist-historian, Guha is also known for his passion for a game that unites all of Indian sub-continent — cricket. Though he could not pursue cricket as a career, Guha has deftly replaced the willow with the pen to make an unforgettable contribution to the sport in his own way.

Thus his phenomenal body of work spans everything from the wild forest to the well-maintained green circle, and how these have impacted the lives of the hoi polloi. This, in turn, has been studied, analysed, reported and debated by several prominent journalists, sociologists, ecologists, historians and environmentalists - all of whom have been directly or indirectly influenced by him and his seminal works. A Functioning Anarchy? Essays for Ramachandra Guha brings together a diverse set of personalities who have thus been influenced by Guha. The book is a festschrift that throws as much light on Guha as it does on his immensely significant contribution to democracy and the wheels on which it rides. It borrows part of its title from the rather apt comment on India made over five decades ago by economist and US envoy to India John Kenneth Galbraith, who called the country “a functioning anarchy” — a nation where everything just falls into place despite the chaos within. The book is edited by Nandini Sundar and Srinath Raghavan, both of whom are themselves prominent figures in their respective fields. Through their 12-page introduction, the editors lucidly set the tone of the book, give a snapshot for readers, and provide insightful details about Guha as well as his influence on contemporaries. According to the editors, the idea for the book came from a workshop held in April 2018 in which renowned scholars such as Mukul Kesavan, Rudrangshu Mukherjee and Ghazala Shahabuddin, among others, discussed Guha’s contribution in his known fields of scholarship. While the panel discussions of the workshop are not part of the book, A Functioning Anarchy? can be seen as the logical next-step in any celebration of Guha’s cerebral genius.

Divided into four parts, the book contains 18 essays — five each in the first two and four each in the last two — by 20 eminent names from scholarly fields across academia, journalism, and others. Each of the essays discuss at length the thoughts that shaped him and the impact of his work in an area of his research while adding dimensions to the field itself. Thus a reader, even if not very well acquainted with Guha’s work, will not only understand the scope and significance of the scholar’s contribution to the nation but also gain enormous information about topics that must be addressed if India aims to identify herself as the torch-bearer of liberal democracy.

Guha’s first article was on the 1878 Forest Act. Perhaps as an ode to that, the first part of the book is about environment and the unsung people who have a stake in it. The essays in this part are therefore dedicated to the writings and works that Guha did in championing the cause of the environment, such as his book The Unquiet Woods. Through his essay, ‘Empire’s Nature in the Garo Hills: A Microhistory of India’s Environmental Movements’, Arupjyoti Saikia, a professor of history at the department of humanities and social sciences, Indian Institute of Technology (IIT), Guwahati, presents a vivid picture of the crucial movement spearheaded by Garo leader Sonaram Sangma against the British government’s unjust policies in the Garo Hills. For readers, the essay lays the groundwork for those that follow. Shashank Kela’s essay looks at forest management in both pre- and post-colonial India and issues such as bureaucratic structures and policies that impact administration of forests in contemporary times. While reflecting on Guha’s thoughts on conservation, Kartik Shanker and Meera Anna Oommen, in their essay, ‘The Authoritarian Biologist Reloaded and Deep Ecology Redux’, draw attention to large NGOs and biologists, and their interlinked functioning, which may not have produced a conservation effort that can be called inclusive. Amita Baviskar writes about India’s anti-dam politics in ‘Nation’s Body, River’s Pulse’ while Brototi Roy and Joan Martinez-Alier pen a defining narrative, backed by evidence from the reliable EJAtlas, about environmental justice movements in the country in ‘Weaving Our Way through Environmental Justice Movements in India’.

The next part is about biographies. Besides his biography on Gandhi, Guha is widely hailed for his 1999 book Savaging the Civilized — which is about Verrier Elwin, a British anthropologist and contemporary of the Mahatma who lived among the Gond people and worked for their uplift. Part II thus present stories of people, some who are lesser-known, who inspired India through remarkable achievements in their respective fields. There is thus the inspiring travels of M. Lakshmi in the words of A.R. Venkatachalapathy but at the same time Dinyar Patel points out in the essay on Khurshedben Naoroji that Indian biography writing has a gender problem. Prashant Kidambi chronicles the life of Buttan Singh, the forgotten Indian champion wrestler of the early 20th century, and Aditya Balasubramanian presents an interesting account of Indian free-market economist and Cold War intellectual B.R. Shenoy. Of note is Akshaya Mukul’s brilliantly written biography of Hindi literary icon Sachchidananda Hirananda Vatsyayana, famously known as Agyeya.

If the second part is about notable people, the third is about how the Indian democracy was shaped by key events primarily in the first few decades of Independence. Venu Madhav Govindu begins this section by presenting the context in which Mahatma Gandhi moved from Wardha to Sevagram in 1936. A most significant essay in this part is by Jahnavi Phalkey. Throwing light on the diverse set of people, nationalities and powers that were involved in the development of Indian fighter-bomber HF 24 Marut, Phalkey raises thought-provoking questions on the meaning of self-reliance through her essay ‘Flights of Freedom’. On the other hand, Madhav Khosla takes a look at the Supreme Court and the legislature in the early years of post-Independence India while Srinath Raghavan writes about Kashmir’s autonomy and insurgency with a special lens on a particularly tumultuous period starting in 1967 and lasting through the 1980s.

The final part of the book is dedicated to the man himself. Madhav Gadgil, with whom Guha collaborated during his years at the Indian Institute of Science (IISc) in Bengaluru and with whom he co-authored This Fissured Land and Ecology and Equity, writes the first essay of this section — ‘Ram Guha: A Radical Progressive’. The widely-excerpted essay by David Gilmour, ‘The Many Rams of Ramachandra Guha’, is also part of this section and so is ‘What Do They Know of History Who Only History Know?’, the essay by Suresh Menon which focusses on the importance of Guha’s book, A Corner of a Foreign Field. Through ‘The Unquiet Ram’, Rukun Advani, the editor of many of Guha’s monumental books including The Unquiet Woods, not only reveals delightful snippets about their decades long association but also charts the development of Guha from his college days to his illustrious standing over the years.

Readers would find that A Functioning Anarchy? is a discovery of Guha’s inspiring life and career as much as it is an intellectual discussion of the ideas and thoughts that shaped him and those that were, in turn, shaped by him. The essays are intelligently selected so as to give readers a well-rounded information about the areas Guha has devoted his life to. Each is individually informative and, at the same time, combine to form a defining narrative about India’s past and present while keeping the focus on Guha’s path-breaking efforts in giving a unique dimension to the historical reading of the world’s largest democracy.

A journalist, the reviewer has written on politics, lifestyle and the human conditions