Govt-farmers meeting ends; Next round of talks likely on Jan 15

Govt-farmers meeting ends; Next round of talks likely on Jan 15 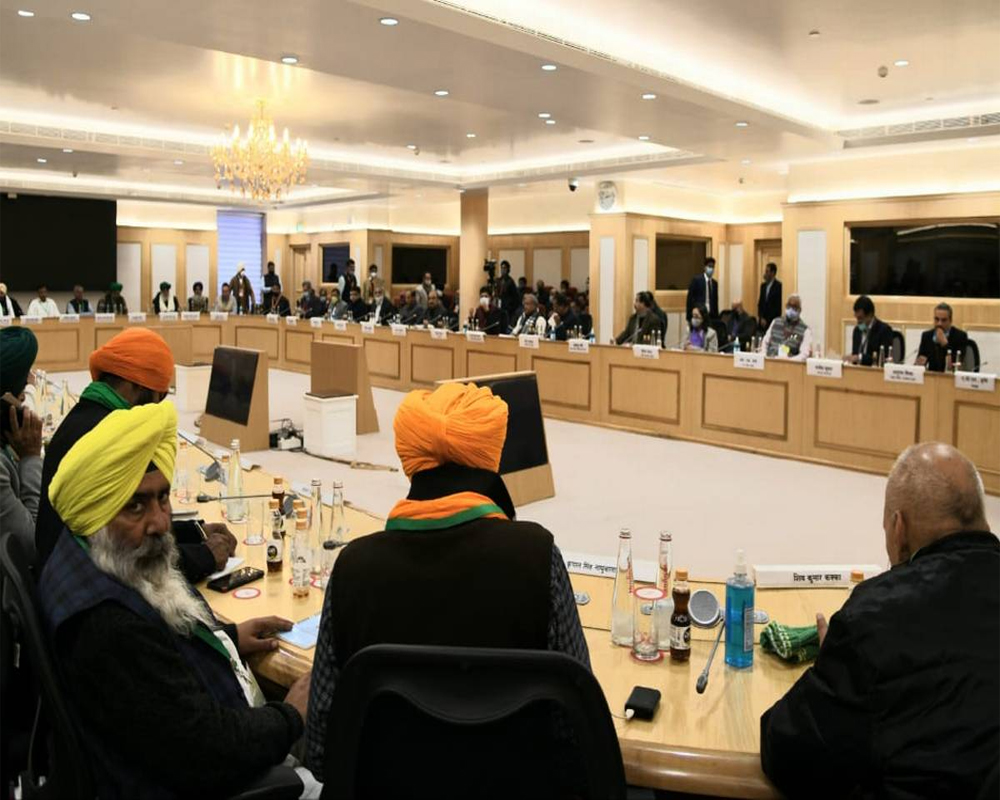 The eighth round of talks between the government and representatives of protesting unions ended without any outcome on Friday and the next meeting is likely to take place on January 15, sources said.

Sticking to their key demand of the repeal of three farm laws to end their protest, farmer leaders told the government their "ghar wapsi" from protest sites on Delhi borders can happen only after "law wapsi" but the Centre insisted talks must be limited to contentious clauses and ruled out a complete withdrawal of Acts.

Sources said not much discussions could take place at the meeting and the next date has been decided after keeping in mind a scheduled hearing of Supreme Court on January 11. The government sources said the apex court may look into the legality of the three laws, besides other issues related to farmers' protests.

At the eighth round of negotiations with the 41-member representative group of protesting farmers, the government ruled out the repeal of the laws, while asserting that these reforms have been welcomed by a large section of farmers in various states and asked the unions to think about the interests of the entire country.

Union Agriculture Minister Narendra Singh Tomar, Railways, Commerce and Food Minister Piyush Goyal and Minister of State for Commerce Som Parkash, who is an MP from Punjab, have been holding talks with unions at Vigyan Bhawan in the heart of the national capital, while thousands of farmers have stayed put at various Delhi borders to protest against the three laws they find pro-corporate and against the existing mandi and MSP procurement systems.

At the outset, Tomar appealed to unions for discussions on the laws, while farm leaders reiterated their demand that the new Acts must be withdrawn, sources said, adding that the agriculture minister stressed on protecting the farmers' interest of the entire country.

"Our 'ghar wapsi' (return to home) can happen only if you do 'law wapsi' (repeal of laws)," a farmer leader said at the meeting.

"Ideally, the Centre should not interfere in agriculture matters as various Supreme Court orders have declared farming as a state subject. It seems you (the government) do not want to resolve the issue as talks have been happening for so many days. In that case, please give us a clear answer and we will go. Why to waste everyone's time," another farmer leader said at the meeting.

All India Kisan Sangharsh Coordination Committee (AIKSCC) member Kavitha Kuruganti, who was also present in the meeting, said the government has told unions that it can not and will not repeal these laws.       Around one hour after the meeting, the three ministers stepped out of the discussion hall for their own internal consultations, after union leaders decided to observe silence while holding out papers with slogans including 'Jeetenge ya Marenge' (We will either win or die).

The union leaders, however, refused to take a lunch break and stayed put in the meeting room, a source said.

Before the start of the meeting, Tomar had also met senior BJP leader and Home Minister Amit Shah for about an hour.

On January 4, the seventh round of talks ended inconclusively as the unions stuck to their demand for a complete repeal of three farm laws, while the government wanted to discuss only the "problematic" clauses or other alternatives to end the stalemate.

Before that, in the sixth round of talks held on December 30 last year, some common ground was reached on two demands -- decriminalisation of stubble-burning and continuation of power subsidies.

Just before the meeting, Kuruganti had said: "If no solution arrived in today's meeting, we will continue with our plan of tractor rally on January 26."

"Our main demand is the repeal of the laws. We will not accept any amendments. The government is taking it as a prestige issue and not taking back the laws. But this is a life and death question for all farmers. There is no change in our stand since the beginning," she added.

The agitating farmers took out tractor rallies on Thursday to press their demand for a rollback of the laws, while the Centre asserted that it was ready to consider any proposal other than a repeal of the legislations.

Thousands of farmers, mainly from Punjab, Haryana and western Uttar Pradesh, are protesting at various border points of Delhi for over a month now against the three laws, despite the cold weather and heavy rains.

Enacted in September 2020, the government has presented these laws as major farm reforms aimed at increasing farmers' income, but the protesting farmers have raised concerns that these legislations would weaken the minimum support price (MSP) and "mandi" (wholesale market) systems and leave them at the mercy of big corporations.

The government has maintained that these apprehensions are misplaced and has ruled out a repeal of the laws.

While several opposition parties and people from other walks of life have come out in support of the farmers, some farmer groups have met the agriculture minister over the last few weeks to extend their support to the three laws.

The government had sent a draft proposal to the protesting farmer unions last month, suggesting seven-eight amendments to the new laws and a written assurance on the MSP procurement system.