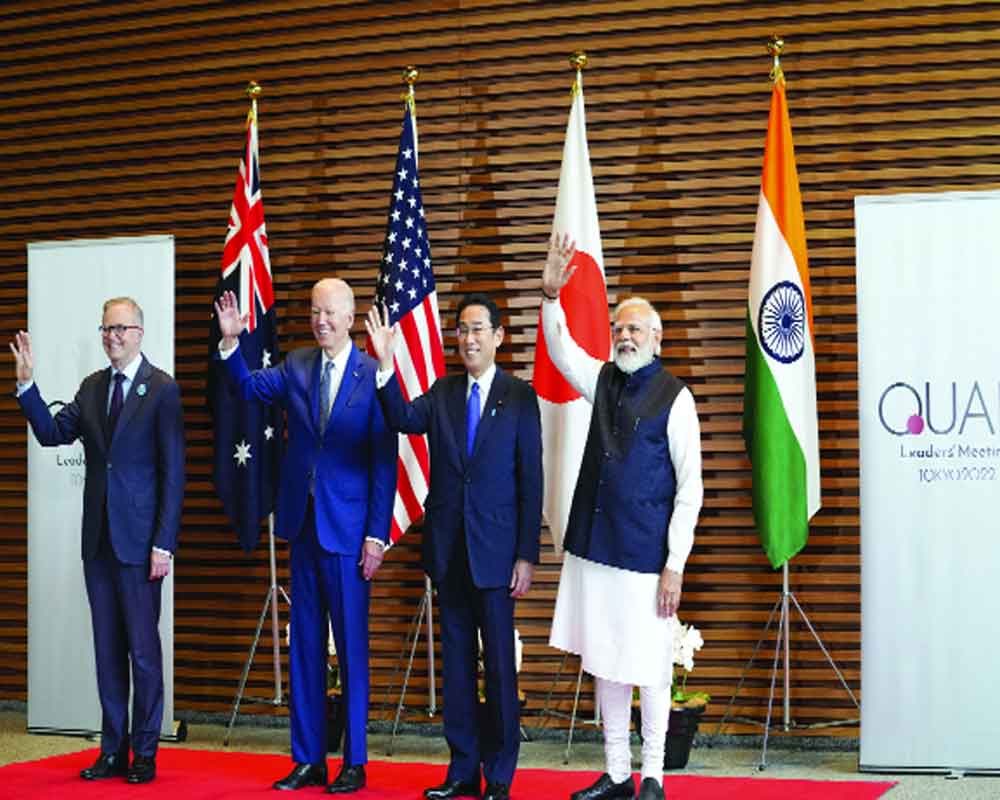 It’s a tightrope walk for the grouping at a time when US-China trade war has reached a peak. After having a bitter experience with Putin, Biden may need to maintain more restraint, simply to avoid another catastrophe in the Indo-Pacific

The May 24 face-to-face meeting of the Quad leaders is considered very crucial against the backdrop of the ongoing Ukraine war. All the four heads of the Governments — Indian Prime Minister Narendra Modi, US president Joe Biden, Japan Prime Minister Fumio Kishida and Australian Prime Minister Anthony Albanese — came together on a platform to display strength and sustainability of the group at a crucial juncture when the world is gradually emerging out of the monstrous Covid-19 pandemic and entering into nothing short of Third World War in Europe.

It must be said once again the global governance institutions, especially the UN and the US-led liberal West have miserably failed to stop the most devastating war in Ukraine. Undoubtedly, the centrality of the Quad summit was the Russian onslaught in Ukraine. The Quad summit is indicative of a new beginning as it has also witnessed the formation of two fresh initiatives: The Indo-Pacific Economic Framework (IPEF) and the Indo-Pacific Partnership for Maritime Domain Awareness (IPMDA).

The IPEF, launched by the US with 12 members on board now, is precisely its answer to the Trans Pacific Partnership (TTP) and its successor, the Comprehensive and Progressive Agreement for the TTP (CPTTP) and towards the China-led 15-country grouping called, Regional Comprehensive Economic Partnership (RCEP).

The IPMDA is aimed at building a “faster, wider and more accurate maritime picture of near real-time activities in partner’s waters”. Basically, it will directly facilitate the tracking of “dark shipping” across the Indo-Pacific region. These all seem to be a detailed preparation by the members of the Quad for preventing China-led initiatives both in the trade and security spheres in one of the busiest sea-communication lanes in the world.

The joint statement issued after the summit addressed the concerns emerging from the war in Ukraine. The statement underlined that the member countries “discussed respective responses to the conflict in Ukraine and the ongoing tragic humanitarian crisis and assessed its implications for the Indo-Pacific region”. The Quad summit has also highlighted and discussed any possible Chinese military adventures in the Indo-Pacific after Europe experienced Russia’s bloodiest invasion of Ukraine.

How did the Quad originate? It all began as a loose partnership against the background of the tsunami in the Indian Ocean in 2004. In fact, all the four nations came together to offer humanitarian assistance and disaster relief. But today China complains that the group is intending to form an “Asian NATO” simply to act against the Beijing’s interests in the region.

Is China threatened by the Quad grouping? The Quad had its first historic meeting in the year 2007. Then no one thought it would be another platform to counter China in the days to come. But afterwards, the forum went into oblivion for a decade or so. It reemerged in November 2017. Its regrouping piqued Chinese interests. And the Communists in China seriously gauged that America was plotting a Cold War style strategic encirclement of China by taking two other Indo-Pacific nations — India and Australia — into the orbit. Initially, when then Japanese Prime Minister Shinzo Abe invited officials from India, Australia and the US to gather in Manila, the Xi Jinping regime was not much worried. Wang Yi, the Foreign Minister of China, had scoffed at the grouping: “They (the Quad nations) are like sea foam in the Pacific or Indian Ocean: They get some attention but will soon dissipate.”

Is there any urgent need to thwart China in the Indo-Pacific? Yes, of course. China’s growing expansionist policies particularly under the current President Xi Jinping is worrisome. His “China Dream” projects are nothing but to assert Beijing’s soft and hard power around the world.

What role India must play in the group? For Delhi, multilateral forums like the Quad are of high importance. China’s growing encirclement and its recent aggressive actions against India are an immediate threat to the latter’s territorial integrity and sovereignty. Xi’s hidden agenda is all out in public now. India at the moment needs external balance. And in this regard, Quad is considered as the best alternative for the country.

How is the old Quad different from the new Quad that India joined in 2021? Yes, they are different in their own way, yet some of the concerns are almost identical. Indeed, India’s growing insecurity in the Indo-Pacific can be sensed when it joined the new Quad comprising Israel, the US and the United Arab Emirates (UAE) last year. Like the Quadrilateral Security Dialogue or the old Quad among the US, Australia, Japan and India, this new economic forum also equally emphasised on trade, climate change, energy and maritime security.

Unlike the earlier group, the current one is not aimed at countering China. It is largely felt that the new one certainly lacks a shared objective, and its future trajectory seems to be uncertain. However, this grouping may facilitate India to pursue its foreign policy goals by aligning more with the UAE and Israel in the West Asian region.

And, this will offer Delhi another opportunity to engage more closely with Washington. Further, India sees West Asia strategically important. India depends heavily on its energy imports. Nearly 9 million Indian workers earn their livelihood from the Persian Gulf. Israel and the UAE can enhance India’s role in the region. What prompted the US to ramp up ties for another Quad is the growing Chinese interest in Israel and the UAE.

But the same is not true for other members of the group. In the recent past, both Israel and the UAE amplified their commercial investments with China, particularly in the shipping sector. Therefore, Washington takes this opportunity to convince Israel and the UAE to come out of the Chinese net. Clearly America’s intention dovetails with India’s as the latter has been continuously fighting to wean off Chinese influence in a region wherein it wants to remain a potential player for long.

The Quad needs to consolidate further. The Indo-Pacific is heading for a serious crisis. China’s ever-expanding agenda accompanied by sheer aggression might destabilise the whole region. Most probably, this kind of a future scenario may drag the US for an all-out war against China. Along these lines, Japan, Australia and India will certainly be involved in this quagmire. Though the Quad group has been formed to boost economic prosperity, geostrategic equilibrium and tranquility in the Indo-Pacific, it is clearly making an alliance that is directly targeting China today. And the latest IPEF will be an advanced economic platform again to target China-led development initiatives in the region. Hence, the Quad and its extended members are all forging together to ramp up support to stop Chinese expansion across the Indo-Pacific.

Beijing now knows it very well. Its full-blown preparations to encounter this alliance are underway. Inevitability of another global conflict in this part of the globe cannot be denied.

The road ahead for the Quad and its new avatars like the IPEF should be to minimise any possible countdown with China. Washington knows fully well that Xi is an over-ambitious leader like Russian President Vladimir Putin. Xi is going to stay in power for long and his third term, unlike his immediate predecessors, is most likely to be endorsed by the Communist Party of China in the coming months. Moreover, he has already shuffled his cronies in such a manner that his grip on the Party and the throne will be completely safe for years from now. Looking at all these developments back home in China, the Quad group leaders and its allies in the IPEF must be cautious while dealing with Xi. Though the US-led IPEF is centrally aiming at strengthening economic ties and achieving shared goals, its anti-China tag may escalate the trade war between Washington and Beijing in future. After having a bitter experience with Putin, Biden needs to maintain more restraint, simply to avoid another catastrophe in the Indo-Pacific.