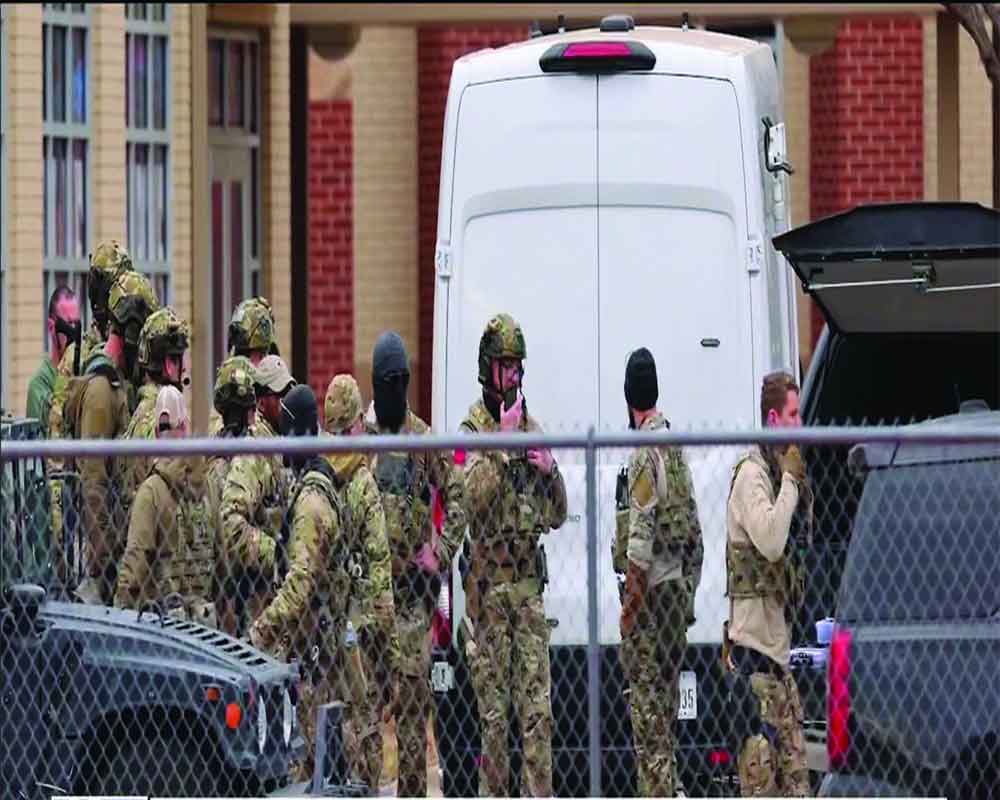 There are no US-Nato forces in Afghanistan and rogue elements have the entire country to themselves to train Pak-backed militants, suicide bombers

The Texas hostage crisis at a synagogue that US President Joe Biden called an ‘act of terror’ has been resolved with the release of four hostages and the death of the hostage-taker but the dreadful situation has brought back the focus on Al Qaeda and its Pakistan connection.

The hostage taker identified by FBI as a British citizen named Malik Faisal Akram demanded for release of a terrorist in the US prison called ‘Lady Al Qaeda’, who is a Pakistan-born neuroscientist, Aafia Siddiqui. The case of the so-called Lady Al Qaeda has exposed links of Pakistan government, Al Qaeda and Taliban as Islamabad has joined forces with the terror groups to seek release of Aafia Siddiqui from the US prison.

The hostage-taker, Malik Faisal Akram, who stormed a Texas synagogue on the Sabbath and was holding hostages before he was shot and killed was demanding the release of ‘Lady Al Qaeda,’ who is serving 86 years in a federal prison less than 30 miles from where the hostage standoff took place for attempting to murder US soldiers in Afghanistan.

Siddiqui was arrested in Afghanistan in 2008 with cyanide and plans to attack the Brooklyn Bridge and Empire State Building. Later she was extradited to the US and convicted in 2010. The demand for her release has brought a number of terror and jihadists groups together along with Pakistan establishment, who have been plotting or negotiating to seek Siddiqui’s release. Terror groups in Pakistan, Afghanistan, who have taken US citizens hostage have tried to negotiate with the US Government offering they would free US citizens in return for Siddiqui’s release.

This curious case of Aafia has also exposed how Al Qaeda, Taliban and Pakistan government are operating hand in glove with one another. Their causes are common and they work in collaboration with each other keeping the terror network very much activated.

Aafia was born in Karachi, Sindh in Pakistan to a Sunni family and later went to the US to study. Aafia returned to Pakistan from America for a time following the 9/11 attacks and again in 2003 during the war in Afghanistan. Khalid Sheikh Muhammad, a Pakistani Islamist militant and the principal architect of the 9/11 attacks, held by the US at the Guantanamo Bay detention camp, named Aafia as a courier and financier for Al-Qaeda.  She was later placed on the FBI Seeking Information- Terrorism list and remains the only woman to have been featured on this list.

Pakistanis view her as the ‘national symbol of honor and victimization’ and the Pakistani news media have called her trial a ‘farce’ and ‘politicized’ from the start. In July 2019, while visiting Washington DC, Pakistani Prime Minister Imran Khan suggested Siddiqui should be exchanged for Shakil Afridi, a Pakistani doctor accused of helping the Americans confirm the identity of Osama bin Laden, in advance of the raid where he was killed.

Earlier, the Pakistan embassy in the US hired a three-person defence team to supplement Al Qaida terrorist Aafia’s two existing public defenders during her trial. The Pakistani government paid $2 million for the services of three lawyers to assist in the defense of Siddiqui during the trial. This is a curious case, where a Government has so openly come out to support an Al Qaeda terrorist exposing its own nefarious designs, how Pakistan harbours Al Qaeda militants and uses them too, all the while giving false assurances to the Americans that  it is helping them to finish Al Qaeda, which is very much active and calling shots more after lying low for some time until the Taliban consolidated its takeover of Afghanistan in 2021.

Terror groups carried out a number of attacks to take revenge for Aafia’s imprisonment, which again exposes whether it is Al Qaeda, Taliban or Tehreek e Taliban Pakistan or Haqqani netwok or JeM; they all are one when it comes to jihad or targeting foreign nationals or people of other religions. They join forces with covert support from Pakistani establishment to target whom they brand as an ‘enemy of Islam.’  According to a video released by Hakimullah Mehsud, head of the Tehreek e Taliban Pakistan (TTP) at the time, the 2009 Camp Chapman attack in Afghanistan that killed seven CIA officers was partly in revenge for Aafia’s imprisonment. The 2010 Times Square car-bombing attempt occurred one day after Mehsud released another video promising to avenge Siddiqui. The perpetrator of the attempt was Faisal Shahzad, a recently naturalized Pakistan-born citizen who had contacts with Jaish-e-Muhammad and Hakimullah Mehsud.

The Taliban threatened to execute US soldier Bowe Bergdahl, whom they had captured in 2009 in retaliation for Lady Al Qaeda -Siddiqui’s conviction. Bergdahl was later released in 2014 in exchange for five Guantanamo Bay detainees. In September 2010, the Taliban kidnapped Linda Norgrove, a Scottish aid worker in Afghanistan, and Taliban commanders insisted Norgrove would be handed over only in exchange for Siddiqui. But later Norgrove was accidentally killed. In July 2011, then-deputy of the Tehrik-i-Taliban Pakistan, Waliur Rehman, announced that they wanted to swap Siddiqui for two Swiss citizens abducted in Balochistan. The Swiss couple escaped in March 2012.

In December 2011, al-Qaeda leader Ayman al-Zawahiri demanded the release of Siddiqui in exchange for Warren Weinstein, an American aid worker kidnapped in Pakistan in August 2011.Weinstein was accidentally killed in a drone strike in January 2015.

Al Qaeda, Taliban, TTP and a host of other affiliated outfits have been kidnapping Americans, Europeans to make an exchange offer for Siqqiqui’s release and the recent hostage taking in a Texas synagogue is just another incident in the long series of events for several years. Given Pakistan’s insistence on release of Siddiqui, now questions are being raised whether all the kidnappings, hostage takings for Siddiqui was at the behest of Pakistan or whether Pakistan gave a tacit approval for the same? Pakistan’s role in these terror activities has become more and more suspect.

Pakistan has been disowning terrorists of Pak origin whenever they are arrested in other countries but not so in the case of Aafia.  In August 2009, Pakistani Prime Minister Yusuf Raza Gilani met with Siddiqui’s sister at his residence and assured her that Pakistan would seek her release from the US. In 2010, President Asif Ali Zardari requested Richard Holbrooke, US Special Envoy to Afghanistan and Pakistan, that the U.S. considers repatriating Siddiqui to Pakistan under the Pakistan-US Prisoner Exchange Agreement. Siddiqui, who had links to al Qaeda and the banned jihadi group Jaish-e-Muhammad has received support not only from Islamic terror groups but Pakistan Government too and this in itself is a clear sign of hobnobbing between jihadists and Pakistan.

The latest hostage crisis at a Texas synagogue and number of similar incidents in Af-Pak demanding release of Lady Al Qaeda must be taken as a warning; the threat of Al Qaeda remains imminent, Taliban takeover of Afghanistan would only worsen it. Now there are no US- Nato forces in the region to check these rogue elements and they have the entire Afghanistan to themselves to train militants and suicide bombers backed by Pakistan government and ISI; this is a dangerous scenario and the sooner the world takes note the better.