Ramesh Chauhan, man who once sold Thunder in a bottle

Ramesh Chauhan, man who once sold Thunder in a bottle 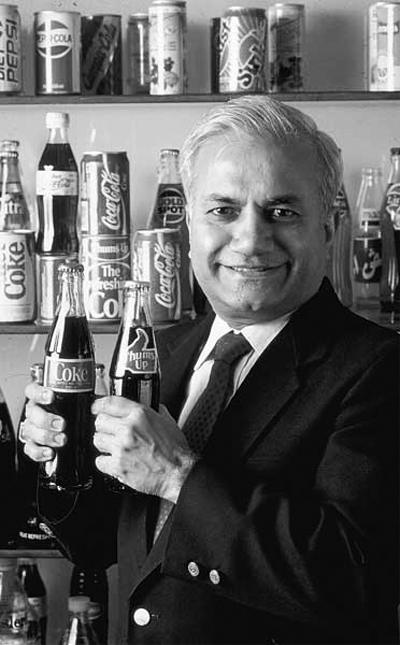 To mark the occasion of his 50 years of association with Parle, country's one of the feistiest entrepreneurs, Ramesh Chauhan of Bisleri launched his biography Thunder Unbottled. The book written by Chauhan's close friend, Patricia J Sethi, gives a fascinating account of his life and times and also talks about how he rose to the top of the soft drinks business and then what were the reasons behind his decision of selling the successful brands to Coca Cola.

In 1977, Ramesh Chauhan along with his brother Prakash Chauhan and then Parle CEO Bhanu Vakil had launched 'Thums Up' as their flagship beverage. But after successfully retaining the market share of Thums Up, limca and Gold Spot against America's Pepsi-Cola during early 1990s, Chauhan finally had to give up the lone fight. In 1993 the brands were sold to Coca Cola, which had re-entered the Indian markets.

When Coca Cola bought Thums Up, it had a market share of 85 per cent. The total deal size was of around $ 60 million after which Thums Up, limca and Gold Spot all were owned by Coca Cola. Thums up and limca were created by Chauhan but after so many years of signing the deal, he still feels extremely happy to see his creations as the current market leaders.

Narrating the events which led to the deal, Chauhan said, "Off all the bottlers, nearly 80 to 90 per cent of the bottling plants were our franchise and when Coca Cola re- entered India, most of them decided to sign up with them. We had to take a decision and we thought that rather than bottlers alone signing up with Coca Cola, we all would join hands with them." Though it was purely a business decision as there was no other option left, Chauhan says in the book that he cried while the deal was being signed as he felt he was giving up his baby.

Giving up his own creations was not easy but Chauhan added, "Back then liberalisation had just started and there was a huge craze towards foreign companies. Seeing that most of our bottlers are ready to sign up with Coca Cola, we also chose to join them and it also felt right at that time." For Coca Cola, the deal turned out to be of extreme strategic advantage as it gave the global beverage manufacture the necessary scale of operations to successfully re- launch itself in the country.  The company wanted to scale up its operations in short time and after signing the deal, not only Coca Cola got three well established products but with it got the huge bottler network as well.

In the initial years, Coca Cola was busy advertising and branding its flagship product Coke which basically meant that Thums Up was being ignored. Commenting on lack of advertising of Thums Up, Chauhan said, "See Coca Cola wanted to make sure their product, Coke was the leading brand. Hence more importance was given to it, which is very natural. As all companies have more focus on their own brands specially when they enter a new market."

While the Indian consumer felt the absence of their beloved Thums Up, Coca Cola was busy drafting its dual cola strategy. Under the strategy, Coke got more importance when it came to branding and marketing simply because Coca Cola felt they had a well defined market for Thums Up and hence focus was more on introducing the new foreign products the company had to offer.

less promotion of Thums Up caused the market share of the drink to fall but Coca Cola feels that the fall in market share was not primarily because of shortage in branding or advertising. It happed during the time when the company was consolidating its franchisees and ramping up its distribution network and this was the main reason which dented Thums Up market share.

When asked how he felt about Thums Up still being a market leader despite the lack of proper branding and rise in competition, Chauhan said, "It feels very good to know that my products are still continuing to doing extremely well and are market leaders in their segments." Since the last a few years now, Coca Cola strategy has also changed and it has started branding all its products irrespective of whether it is their own brand or an acquired one. For a 36 year old product first launched by Ramesh Chauhan and then acquired by Coca Cola, Thums Up still continues to be one of the market leaders. Apart from that limca has also started to show a sign of bounce back as its popularity has been growing exponentially and also Coca Cola has been investing in its re- branding.