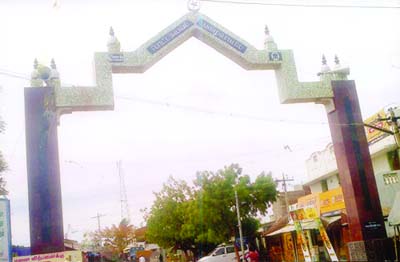 Ramanathapuram district, 527 km south of Chennai, which houses Rameswaram Temple and many holy shrines, is getting out of bound for outsiders. local Jamaath Councils have issued ‘fatwas’ declaring Muslim-majority villages out of bound for people even from the district itself.

Entrances to Athiyuthu, Puthuvalassai, Panaikulam, Azhagankulam and Sitharkottai sport such boards, all put up by the local Jamaath Councils. “There are boards deep inside these villages which declare outsiders are not allowed,” said B Arumugam, who acted as a guide to this correspondent. Interestingly, all these villages have a strong Muslim population.

“Advertising (banners, posters and pamphlets) and honking (from vehicles) without permission is prohibited inside the Panchayath. By Order - Muslim Jamaath Thajul Islam Sangh, Pottakavayal”, is the board which welcomes the visitor to the village entrance on the Attrankarai Road, hardly 10 kilometre from Ramanathapuram town. “For the last 20 years, only Muslim candidates had been elected from this constituency. Only Muslims could be elected from this Assembly constituency,” said N Suriyaprakash, a civil engineer-turned-politician.

Ramanathapuram is represented in the Tamil Nadu Assembly by MH Jawahirullah of the Muslaim Munnetra Kazhagam (MMK), an Islamic outfit. The MMK was an ally of the AIADMK in the 2011 Assembly election and switched over to the DMK camp during the July 2012 Rajya Sabha election. “Both the Dravida parties are responsible for this sad state of affairs,” said Kuppuramu, a lawyer. He said the DMK, the Congress and the AIADMK, in order to appease the minorities look the other way when Islamic fundamentalists unleash a reign of terror.

Kuppuramu took this reporter to Pamban, a village near Rameswaram island, the birth place of Pamban Swami, a great Saivite saint. The Panchayath road has a board put by the Islamic extremists banning outsiders from the road: “Not a public thoroughfare. ladies move about in this place,” says the board.

Pamban Swamy (1848-1929), who preached love, compassion, kindness and equality, would be turning in his grave if he comes to know what his successors have done in his place of birth. The Hindu community is a scared lot because of the ever growing Islamic extremism in the district. “During the DMK regime in 2008, some Muslim youths hoisted the national flag with chappals at Vethalai village. The case was hushed up by Hassan Ali, the then MlA of the Congress,” said Kuppuramu. He said there was another instance of tricolour with chappals being hoisted in Puthumadom village which too was hushed up Hassan Ali.

Efforts to contact the district collector and superintendent of police were futile. Though e-mails were sent to both the officials, there were no replies. “The collector is busy in meeting senior officials. We are yet to check the mail,” Dharman, his personal secretary told The Pioneer on being asked about the email.

R Nataraj, former director general of police, Tamil Nadu, said it was not proper to put up such boards. “I don’t think even the government has the power to put up such boards. But we have to find out why they have put up boards like this,” said Nataraj. BR Haran, a political commentator, and Gowthaman, director of  Vedic Science Research Centre, Chennai, who accompanied this reporter to the spots, were told by villagers of Azhagankulam that they have no other way but to fall in line. “We can never survive here without their cooperation. We are all businessmen and why should we bother about such boardsIJ” asked Nithyanandam, a building contractor at Azhagankulam.

The villagers are still in a state of shock as some Muslim youth slaughtered a cow in front of the Muneeswarankoil Temple. “The Jamaath Council president and secretary told us that they were helpless as the youth would not listen to them,” said Senthilvel, a foreign exchange dealer in the village. Suba Nagarajan, a BJP leader in Ramanathapuram, said the Muslims in the district are on a warpath with the Hindus since 1981. “Religious conversion and smuggling are rampant in the district. Panna Ismail and Bilal Mohammed, who murdered Hindu leader Vellaiyappan in July 2013 at Vellore had come to Keezhakarai after the murder. The police should probe the details of their visit to Keezhakarai,” he said.

According to Kuppuramu, nearly 50 per cent of the business establishments in Ramanathapuram are owned by members of the Musilm community. “A Hindu can launch his business only if he gets approval from the Muslim community. This is an unwritten rule in the district,” said Kuppuramu. He said his efforts to meet the superintendent of police ended in futile as the officer was busy most of the time.

The local population is of the view that Chief Minister Jayalalithaa is the only person who could solve this fundamentalism tangle. “She made the police track down the killers of Hindu leaders by constituting the Special Investigation Division. The same SID may be able to resolve this issue,” said Shiva Thavasimani, Hindu Munnani leader.