The King and his Horsemen

The King and his Horsemen 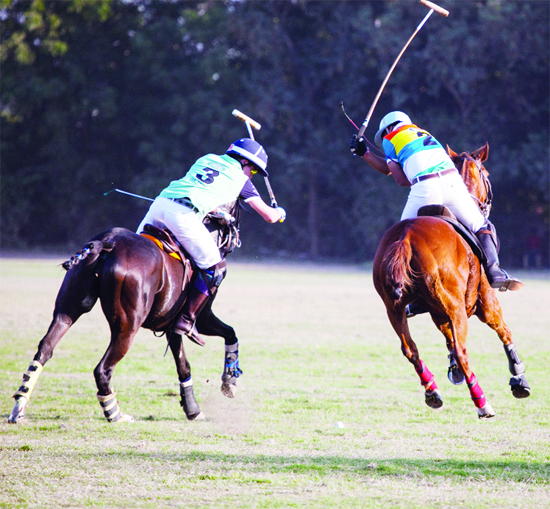 The third edition of the India leg of the British Polo Day hosted by the erstwhile Maharaja of Marwar-Jodhpur, Gaj Singh II, in his home state is unlike a regular event. It’s a show of Indian heritage in a setting that could be defined from the era gone by, says Navneet Mendiratta

It’s not at all cold by Jodhpur’s standards. Actually, it could well be defined as a typical English summer going by the bright sun overhead and the easy chic that the guests at the private Polo Grounds of the erstwhile Maharaja of Marwar-Jodhpur, Gaj Singh II, are sporting. Only this is the Indian soil and the guests are here for the third edition of the British Polo Day. There, however, is no chance that they would swap style for comfort.

On the grounds, two teams of four horse-sportsmen each are ready to take on each other for a game of four chukkars — a daring match that is to last about 45 minutes. It’s Mayo College versus Eton today fighting for the Jodhpur cup. For the final cup, the President’s bodyguards would be taking on a team of the British Army tomorrow.

The crowds are awaiting the arrival of Baapji (as Gaj Singh is fondly called by the people of the state), happily downing glasses of lemonade and other soft drinks to keep themselves “cool”. There really is no hurry. Behind the mike, Col Simon ledger, the president of the British Polo Association and the commentator for BPD, is keeping everyone entertained with his observations.

A band dressed in regal red announces the arrival of the host and his entourage. The match is to begin soon. Founded by Edward Oliver and Tom Hudson, the British Polo Day is an annual tour of 12 countries by British teams and guests. And this is the Indian edition hosted in Jodhpur by Maharaja Gaj Singh II of Marwar-Jodhpur. The game turns out to be a thrilling one with Eton beating the Indian team by only half a goal. Post the prize-giving and numerous photo opportunities, high tea awaits the guests at the farther end of the grounds. The guests have a couple of hours before they can dress up for a gala dinner at the Mehrangarh Fort.

The tradition of Polo

There is something very regal about the game. Perhaps given the skill that is required of a sportsperson, who must be a great equestrian, it was natural that those with a warrior lineage and high fitness take on to this. Endorsed by the royals, gradually it became a game that the elite indulged in — one that spells tradition as well as excellence, elegance, and style. For the armed forces, this is training for the mind and body, with high levels of fitness and skill thrown in.

The game is said to have originated in China and Persia nearly 2,000 years back and the Mughals brought it to India. It was in Manipur that the sport caught the fancy of the British who then carried it back with them to England. Back home in India, it found great followership among the elite of Rajasthan and the erstwhile royals who have kept the tradition alive. The other forms of Polo played are camel and elephant polo, which require equal amount of skill but lack the speed as of the horse version.

The polo season in India starts in late October and travels to Rajasthan every year in winter in the month of December and lasts till mid April in different parts of India. And yes, Jodhpur is quite a favourite destination what with the personal involvement of the erstwhile Maharaja.

A night at the fort

The grand Mehrangarh Fort looks beautiful by the night. One of the best preserved forts in India, it stands on a perpendicular cliff, four hundred feet above the skyline of Jodhpur. Made in burnished red sand stone, it looks imposing and invincible at the same time, if at all even more at this hour. Swathed in a bright yellow light, you can image a thousand mashals lit to keep the place glowing. It could well have been another day in another era — that is once you clear the security check right at the entrance. A neat row of elephants and camels dressed up in fineries swaying to the tune of the royal band welcome the guests at the gates. The English guests can be seen exclaiming with delight. The group is then led into the fort with great pomp and show to the spot where everyone gathers for dinner, the walk breaking intermittently to enjoy the folk arts of the desert land.

For once you get to see how rich the Indian heritage is and it even makes you wonder why we are not able to replicate this model in the other parts of the country and bring out the best about our heritage locations. The fort houses a grand collection of fine arms, miniature paintings of the Marwar School, palanquins, elephant howdahs, polo and racing trophies, put up on display at the museum in its compounds. At the moment, it is the royal hospitality at its best. Somewhere along the route, you can see the entire city. It appears as if a sheet of glow worms that seem to have settled in for the night. The view is breathtaking. As the guests make themselves comfortable at the open terrace, Manganiyars perform at the platform across. It’s a sight to behold.

British Polo Day is one of the many events hosted by the Mehrangarh trust. A sufi festival at Nagaur and the Royal Salute cup, another Polo event that is to be held in the coming days, are only two of the many others. What is interesting is that these events offer their guests with an opportunity to enjoy the royal hospitality that would have been granted to the guests in the days gone by.

In the final day, the game is a tight one with the President’s bodyguards beating the visiting team by one goal in the last 20 seconds before the finish. The Indian side is happy to keep the trophy home. The evening is another grand spell this time cast against the backdrop of Maharaja’s living abode, Umaid Bhawan Palace, at its opulent best.

The guests this evening are dressed in the formal best for the India launch show by well known India-born British designer, Zaeem Jamal. He is showcasing his Camelot collection for the Indian market. The event is followed by a quick charity auction, the proceeds for which are to go to the Head Injury foundation that has been set up by Singh to support the cause. lady Violet and Alice Manners (daughters of the Duchess of Belvoir) represent the British royalty and mingle with the other elite guests. “Britain and India have a rich and complex heritage that through polo comes to life with a modern twist. It is a wonderful platform for British and Indian friends to meet up over a long weekend and celebrate the ties that bind us,” says Gaj Singh. Ask him how he manages to remain so active, he laughs: “Carrying on your heritage is a huge task.” Now this is something we all would agree.

The next day as the guests prepare to leave, there is a promise that they would be meeting for the Indian chapter again next year. The event would however be moving on to Abu Dhabi and Dubai for the next leg. As for the Indian Maharaja, he has all set and prepared for the next event, the Royal Salute Cup, which would again open the doors of his palace and grounds to the guests. There is never a dull day in the Indian royalty.