Where Buddha walked the last time

Where Buddha walked the last time 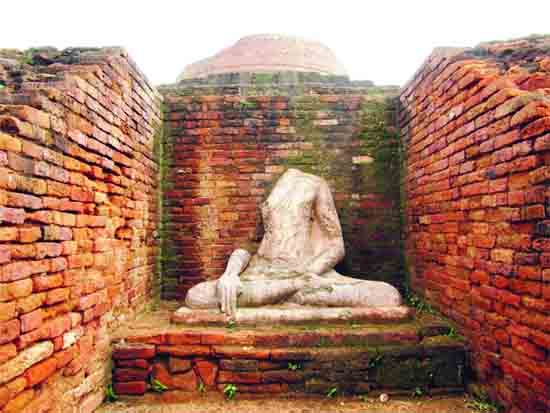 The Kesaria stupa in Champaran district of Bihar is taller than its illustrious counterpart in Borobudur, Indonesia. Somen Sengupta visits the place to tell us more about it

Caught in a long traffic jam over the Gandhi Setu that connects Patna and Hajipur on the river Ganga, I was becoming restless. It was early morning and I had to travel a distance of about 151 km from Patna City to reach a place where an evidence of India’s pristine past stands almost in oblivion. I was travelling with two of my friends who had no idea where Kesaria was, although they were very much aware of Vaishali and its past.

My introduction to Kesaria came accidentally when I was reading about Alexander Cunningham, the legendary archeologist of the 19th century who had explored, excavated and saved most of our glorious relics and ruins. In 1861, Cunningham, after measuring this site, realised the potential of unearthing a huge stupa out of a mound. He did a vivid calculation of the structure and was sure that the stupa was not less than 150 ft tall.

Before him, in 1814, a British archeologist named Colonel Mackenzie had excavated a part of this mound but no records of that work are available now. Again in 1835, another British archeologist Hodgson published a sketch of this ruins without any reference. So, Cunningham and his team can claim the credit of exploring Kesaria.

The sky was clouded enough to kill any possibility of good photography. Thanks to the Bihar tourism department, we found signboards instructing the way to reach Kesaria at every crossing. When our car entered Champaran district, the sky suddenly smiled with sunshine.

Various Buddhist texts say that after spending many years in Vaishali, Gautam Buddha left the city for his impending mahanirvana. The people of Vaishali could not believe it and followed him, ignoring his advice to go back. Here at Kesaria, then known as Kessaputta, Buddha again told them to return. Finding their reluctance, Buddha gifted them his begging bowl as a token of memorabilia and delivered his last sermon called Kalama Sutta, one of the greatest of his life. From here Buddha started his last journey towards Nepal, but died at Kushinagar on his way.

later, to commemorate the great event of Buddha’s life, this stupa was built in the seventh century by people of Vaishali. It is believed that they have buried the begging bowl of Buddha here. For several centuries after that it was one of the holiest pilgrimage sites for every Buddhist. No wonder, Hieun Tsang, the illustrious Chinese visitor in the seventh century, gave a vivid account of this stupa in his travelogue.

Soon I noticed the stupa in the middle of a field. The first look of the excavated monument was not quite impressive. Neither was it well maintained. Unlike other protected monuments under the Archaeological Survey of India, the Kesaria stupa remains unfenced and wild vegetation has engulfed its surroundings. At first glance, it does not look big, but thanks to the engineering marvel, it appears gigantic as soon as one walks closer to it.

When first explored during the British era, the height of this stupa was 123 ft. It, however, got reduced to 104 ft after the devastating earthquake of 1934. Still the Kesaria stupa is about a ft taller than the Borobudur stupa of Indonesia, making it the tallest Buddhist stupa in the world. Incidentally, there are several similarities between Kesaria and Borobudur. Both are six-terraced stupa. Even their width and diameter are same! The only disparity is that while 11 Buddha images have survived in Kesaria, more than 500 such images can be found in Borobudur.

Three different types of bricks can be seen here. While two types of bricks that were commonly used belonged to the Sunga-Kushan and the late Gupta eras, the third one must be from the British period when the exploration started. From this, both the construction work as well as the renovation period of the stupa can be determined.

The stupa has six floors with a circumambulatory path all around. On the top of the mound there is a brick-made cylindrical-shaped structure which stands partly ruined. Here in every floor, small brick cubicles are made and in every such cubicle cell a central platform is found on which a life-sized stucco statue of Buddha is placed. Today, one can see only 11 of them. Unfortunately, these statues are either headless or broken from the waist. The existing part still makes a magical impact on the visitor.

On the first floor I found a stone platform, which actually worked as a path. It is the pradakshina path. Here I found three headless Buddhas placed on the central brick platform. While one is in the posture of dhyanmudra, the other two are sitting in the famous bhumisparsha  mudra. Some Buddha statues are also in the Padmasana mode, the famous lotus position. The statues are made of mud and thick brick jelly with lime wash.

Standing close to these broken statues and breathing the smell of the bygone era, I found a chill passing through my spine. I was standing where once Buddha walked. And with him walked thousand other noble souls. I silently thanked my serendipity.