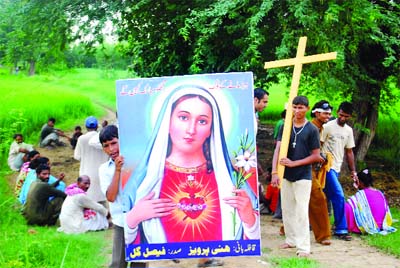 A White Trail by lahore-based journalist Haroon Khalid talks about the religious minorities in Pakistan and the changes they face with rising intolerance in the country. The author spoke to Karan Bhardwaj

Tell us about the book A White Trail (Westland ltd).

It is an ethnographic study of the religious minorities of Pakistan. This includes Hindu, Sikh, Christian, Bahai and Parsi. The book is written as a travelogue talking about the religious festivals of these communities that I visited. However, within that framework I have also used long structured and short interviews that I took at the festivals and outside to draw a large picture of the religious minorities. I would say that a lack of research on the topic inspired me to choose this subject. Issues about religious minorities have only recently found a space in the local media. Even then most of them focus on the aspect of persecution. I wanted the stories about minorities to be more than the stereotypical persecution. There are several other things that I talk about in the book, for example the resurgence of a lot of religious traditions in the past few years. The research process took about two years and the actual writing and editing took about four months.

You hated writing in the beginning. Then how did you become a columnistIJ

As a child I wasn’t a reader and hated writing. This is something I acquired during my college days in lahore. I did my graduation in Anthropology from lUMS. Writing for me began as a source of activism. My earliest articles were about abandoned Hindu temples and Sikh Gurudwaras which were being destroyed by the land mafia.

What inspires you to write on the religious minorities in PakistanIJ

It was the silence about Hinduism and Sikhism primarily in my formal education that led me to study these religions on my own. I wanted to learn about traditions that were part of the land I occupied. This fascination with these “taboo” topics led me to the religious minorities. After interacting with them I learned that they reflected an important part of the history of the country. It began initially with articles that I would write for local newspapers and magazines. Eventually as the collection of articles increased I thought I should put them all together in one book. Of course, when the actual writing process began I had to rewrite all the articles. It was also because since there was no book on the religious minorities in Pakistan I wanted my book to be out there so that such an important aspect of our society could be studied.

Most of the feedback has been encouraging primarily due to the fact that this book is first-of-its-kind. Most Pakistanis that I have interacted with do not even know such communities exist and such festivals are being celebrated so it’s something new for them. One sort of criticism that I hear often is that through the book I am portraying a negative image of the country. This of course is based on the assumption that any discussion on religious minorities is focussed on their persecution. I don’t take this criticism seriously because it usually comes from people who haven’t read the book.

Share some experiences, tragedies and agonies you came across while speaking to the people.

There are a number of them. But one of the most poignant stories was that of a Hindu girl whose parents were murdered by some fanatic in lahore. She was forced to move to India to live with her aunt. She couldn’t adjust there too because of her association with lahore and the prejudice she faced at the hands of the orthodox. She moved back to lahore. Here she fell in love with a Muslim boy and decided to convert to Islam to marry him. Ten months after her marriage the boy committed suicide for business-related issues and her in-laws blamed her for that. She now finally has found a place for herself in the society. She is still a Muslim and works for an NGO.

What are their issues and problemsIJ

How do administration and activists deal with these problemsIJ

There are a number of organisations like SAFMA, HRW and HRCP working for the welfare of the minorities. Some of the progress that members of these communities have been able to make is with the help of such organisations.

As far as the establishment is concerned its response would vary depending on what community it is dealing with. They tend to respond quickly if an issue arises in the Christian community as compared to the Hindu community. The Sikh community too I feel is well-looked after. The Bahai’s and the Parsis have their internal organisations that look after weak members of their communities.

For the most part these religious communities are not visible at all. So their presence does not hold any particular relevance to the cultural life of Pakistan. However, I feel that as far as the cultural life of Pakistan itself is concerned, it owes much to the Indian religious traditions. These ancient beliefs and traditions have seeped into our blood and they are as much ours as anyone else’s.