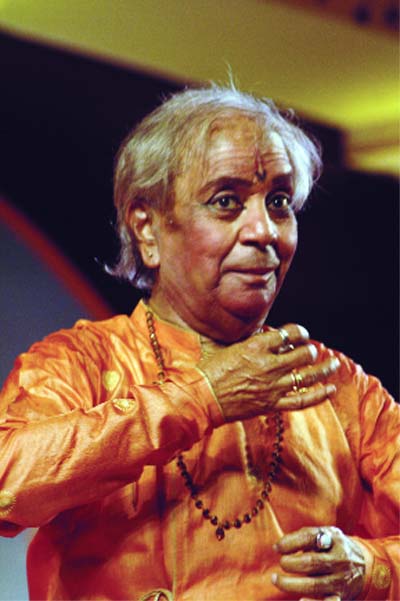 The Kathak maestro Birju Maharaj’s family — fondly called Kalka-Bindadin gharana of Kathak — draws its uninterrupted lineage since the days of India’s first war of Independence, if not earlier. The brothers Bindadin and Kalka fled the troubled city of lucknow to settle in Bhopal. Bindadin’s dance was elegant and virile, while Kalka was graceful and lyrical. Kalka’s sons Achhan, lachhu and Shambhu received training from uncle Bindadin. Back in lucknow, Achhan evinced extraordinary genius at laykari (rhythmic) aspects of the art, while the handsome and fashionable lachhu captured bhava (emotions) with rare similes and endeared himself to the celluloid world of Kolkata. The youngest Shambhu, dark and tall, became a wizard in percussion, excelled in vocal and, above all, showed enormous talent in abhinaya (expression). His sons —  Maharaj ji’s first cousins — are Ramkishen and Rammohan Mishra, both most accomplished dancers, as are Maharaj ji’s own sons: Jaykishen and Deepak. The gharana continues.

Incidentally, not all classical dances have been fortunate to have own gharanas, having been generally one-generation phenomena so far. For instance, the celebrated Rukminidevi Arundale, who revived Bharatanatyam, had no issue, although she had a most encouraging husband, a white European and an unsympathetic brother who sued her on property issues. The great Odissi guru Kelucharan Mohapatra was from a painter-family, whose talented wife pre-deceased him and son is now running his dance-institution, having been embroiled in marital matters. In Kathak, on the other hand, Maharaj ji has founded a post-retirement training institution, Kalashram, flourishing in multiple locations. Kalashram has involved all his old and new generations, and held frequently song-and-dance festivals, including the recent Vasantotsav.

Vasantotsav began with a triumvirate of senior Kathak dancers, each running her own institution and all of them as Maharaj ji’s disciples at one point or the other. Performing individually, and all together, to the well-known thumri: Ritu Vasanta Aaola Re.... Malatii Shyam was soft and luscious; Durga Shyam statuesque and vigorous; and Rani Khanum delicate and well-poised. Coming all the way from Spain, Durga was the most impressive of the three, proving her extant practice, grace and stamina.

Katha Dance Theatre from Minnesota, USA, presented a mini-ballet, Karna and Kunti, based on Mahabaharata’s well-known episode of the Pandava-mother Kunti approaching in private her discarded first son Karna, as a last-ditch effort to draw the latter to the Pandava camp before the onset of Kurukshretra war. It was a brilliant blend of English poetry, Gospel music and blue Jazz tunes: as a collaborative work. Choreographed as a Kathak pas de deux by Rita Mustaphi — another student groomed by Maharaj ji — it was well enacted by herself and the young Anurag Sharma, trained well in the classical form. Said Rita, “I have drawn inspiration from Tagore’s Bengali long poem Karna-Kunti Samvad which beautifully captures the pre-war tensions and strategic moves, together with a hapless mother’s agony and Karna’s admirable self-pride. I have a one-hour theatrical version of the presentation — with many characters including Draupadi — which I propose to bring to India next year.”

The finale was a splendid gharana production by Jaikishen Maharaj — who now teaches at Maharaj ji’s old habitat Kathak Kendra — with the latter’s well-honed female students. Based on a Hindi poem by Ashok Chakradhar about the first flight of fledgling birds, the unusual choreography was visualised with imagination: with the chicks’ first hesitant flapping of wings; their nascent venture well outside the nest’s ambit; their growing confidence to fly across valleys and dales; their ecstasy to float unhindered over hills and woods and their yearning to meet the near and dear ones. In theme and treatment, there seemed to be an uncanny resemblance with Richard Bach’s Jonathan livingstone Seagull and its unforgettable musical sequel by Harry Belafonte.

Said Jaikishen, “Chakradhar’s poem is to be read in original: to enjoy the many moods of the first avian flights undertaken ever! I have only tried to capture a few of these moods in my composition.”