Support for secular Balochistan to hit at Pak terror

Support for secular Balochistan to hit at Pak terror 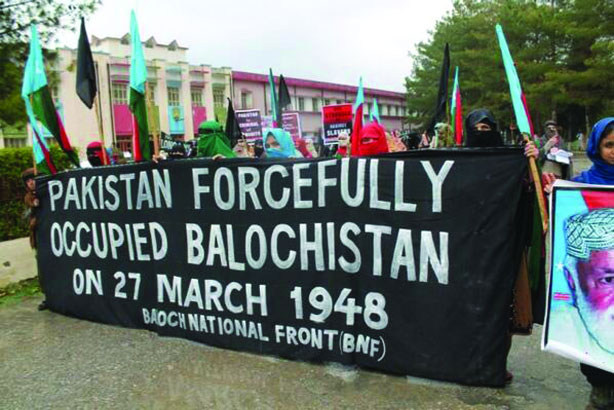 Pakistan has proved itself to be an unreliable US ally in Afghanistan and in the battle against Islamic extremism. The time is long overdue for alternative courses of action, including ramping up attacks on terrorist targets in Pakistan, a reduction in the US aid, and support for an independent, secular Balochistan as potential buffer, free of religious militancy

American policy towards Pakistan is driven primarily by the war in Afghanistan and without the conflict that policy would be quite different.

It is a policy of extortion, whereby, Pakistan, in exchange for money and a veil of undeserved international legitimacy, permits the resupply of US and NATO troops fighting in Afghanistan, while regulating the battle tempo, adjusting its support for and the flow of Taliban, Islamic State (ISIS), Haqqani network and other terrorist groups. Pakistan dictator Zia-ul-Haq had once said, “Keep Afghanistan boiling at the right temperature.”

To America’s embarrassment, it is the foreign policy equivalent of a battered wife pleading for understanding of her abusive husband and the need to address his “insecurities” and create “incentives” for good behaviour. It is, in fact, a strategy that rewards and facilitates bad behaviour rather than inhibiting it.

No amount of reassurance or incentives will divert Pakistan from its present course and permit the US and NATO to achieve their objectives in Afghanistan as long as the regional strategic environment remains the same. Pakistan has successfully used Islamic terrorist groups both to suppress ethnic and nationalist aspirations within its borders and as an instrument of its foreign policy.

Pakistan openly admits that it uses “religious militancy” for national security purposes, such as terrorist attacks in India and deploying the Taliban to control, influence or destabilise Afghanistan. As long as Pakistan chooses to act like a pariah, it should be treated like one.

Pakistan is committing societal suicide incrementally through the steady spread of ever more extreme and increasingly intolerant forms of radical Islam within its borders.

Sunni supremacism has deep roots in Pakistani politics, as an internal response to stem the growth of Shia Islam after the 1979 Iranian revolution, to quell ethnic separatism and to make Pakistan a global Sunni leader. The 1985 formation of the Deobandi Sipah-e-Sahaba, an offshoot of Jamiat Ulema-e-Islam, was founded specifically to counter Shia influence in Pakistan. In 1996, elements within the Sipah-e-Sahaba, who did not believe the organisation aggressive enough, left to form the more extreme lashkar-e-Jhangvi.

In line with its decades old “Islamisation” policy, Pakistani authorities have expanded Islamic education in traditionally secular Balochistan and have promoted or turned a blind eye to the establishment of terrorist proxies to combat the independence movement in that province.

Despite official Pakistani protestations to the contrary, the influence of passionately anti-Shia terrorist entities like the ISIS, the home-grown lashkar-e-Jhangvi’s and its various splinter groups is growing, particularly in Balochistan, which borders southern Afghanistan and is becoming ever more volatile.

Due to Pakistan’s support of radical Islamic groups, Balochistan remains the primary hub for the Afghan Taliban and, similar to Taliban Afghanistan of the 1990s, it has become a magnet for international terrorist organisations like the ISIS.

The ISIS initiated major terrorist operations in Balochistan on August 8, 2016, when a suicide bomber killed 93 people and wounded scores of others during an assault on the Civil Hospital in Quetta, Balochistan’s provincial capital. That attack was followed by two others, one on the Police Training Academy in Quetta, and the second on a Sufi shrine near lasbela known as Shah Noorani. In these three attacks, over a four-month period, about 250 people were killed and more than 300 were injured.

It is one thing to kill yourself, it is quite another to insist upon taking others with you.

Indian Prime Minister Narendra Modi was correct to address the issue of Balochistan in his Independence Day speech on August 15, 2016, in the context of the increasing number of human rights violations and the expansion of Islamic terrorist groups, coupled with Pakistan’s tepid response to conditions for which it is, at least, indirectly responsible.

Pakistan has proved itself to be an unreliable US ally in Afghanistan and in the battle against Islamic extremism. The time is long overdue for alternative courses of action, including ramping up attacks on terrorist targets in Pakistan, a reduction in the US aid, and support for an independent, secular Balochistan as potential buffer, free of religious militancy.

(lawrence Sellin, PhD, is a retired US Army Reserve colonel, an IT command and control subject matter expert, trained in Arabic and Kurdish, and a veteran of Afghanistan, northern Iraq and a humanitarian mission to West Africa. He receives email at lawrence.sellin@gmail.com)