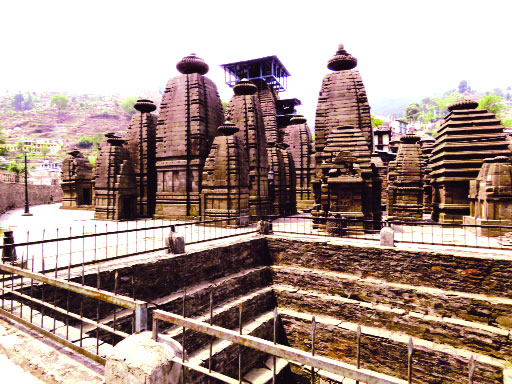 A unique 1,200-year-old temple town rests in the lap of breathtaking beauty of Himalayan village Artola on the banks of two small rivers, Nandini and Surabhi, writes SOMEN SENGUPTA

This heritage rich country is unfortunate on one account. Here the unlimited power of imagination had given common people the right to blend mythology in every smallest piece of history, and from Kashmir to Kanyakumari, every single archeological site is mingled with that. Else how has a unique 1,200-year-old temple town resting in the lap of the breathtaking beauty of Himalayan village Artola on the banks of two small rivers, Nandini and Surabhi, preserved so little information of its pastIJ

It is sad that we have shown such little interest in recording our pristine past in an organised manner. Thus, in many places, with the passing of time, we are not only getting poor with our heritage but gradually our golden history is being diminished.

Just 38 km before Almora town from Pithoragarh of Kumaon region of Uttarakhand, a thousand years old temple complex with more than 126 temples gives us the testimony of India’s uniqueness. Here, different people tell different versions of legends and folklores about this outstanding archaeological treasure, but there is no one who can shed light on its actual history. The tragedy of Jageshwar group of temples, an ASI protected archeological site, is that it has very little history in store compared to the mythology and legends associated with it.

In first look, Jageshwar looks messy yet marvelous. It is messy because in a small complex, it houses more than 100 temples all built in Nagger school of architecture of North India with a strong influence of Buddhist hill temple in some temples. Once there were 400 temples in Jageshwar of which 124 have somehow survived in various clusters.

Through nearly 25 inscriptions on the walls and pillars, mostly written in Sanskrit and Bramhi script, it is learnt that these temples were built between the 4th and 18th Century. It was initially funded by the Gupta dynasty, but later kings from various dynasties, like Chand, Ghand, Katyuri, and Malla kept adding new temples in Jageshwar, considering its massive potential of pilgrimage. The temple saga of Jageshwar boomed from the 15th to 18th Century when the Gurjara Pratihar dynasty started funding the temple construction. However, important temples were built by Katyuri kings. The archaeology followed here is simple yet attractive. All main temples have tall curvilinear spire, shikhara, the central hall of the temple surmounted by a stone crown named amalaka or a stone water pot named kalasa.

The biggest temple complex of Jageshwar is dominated by many Shiva temples, with various names all co-existing with other temples dedicated to Kalika, Nava Durga, laxmi, Surya etc. One temple is dedicated to Pushti Devi, the wife of Ganesha. A temple dedicated to the wife of Ganesha is indeed rare in India. Among various names of Shiva, here temples are dedicated to Kedareshwar, Maha Mruttunjay, Baleshwar, Neelkantha and many more. Sources confirm that once Adi guru Shankaracharya visited this place while on his journey to rejuvenate Hinduism. A thousand years ago, this place in the lap of Jataganga Valley was a stopover for pilgrims going to Mansarovar. Nestled in a deep forest of cedar and bushes of fern, this place is a charm.

While going to Kedarnath, Shankaracharya found the Nagesh Shiva, one of the Dwadash Shivalinga established by Vishnu as mythology avows. Dwadash means 12th and it is believed that there are 12 sacred places for Hindus in India where these shivalingas are still worshipped. Some of the dwadash shivalingas are in Somnath temple in Gujarat, Kedarnath in Uttarakhand, and Kashi Vishwanath in Uttar Pradesh. From these three examples, one can imagine at what herald a God-fearing Hindu will place Jageshwar, which houses nine such shivalingas. It is called Nagara shivalinga or the ninth shivalinga of Vishnu. With the sacred visit of Shankaracharya, this place came under focus. Shankaracharya stayed here to rebuild a few temples. The story of Shiva is written on every single stone of Jageshwar. Though the ancient text Prasadamandanam describes the place as an abode of Shiva, the legend goes that he came here to escape the cold of Kailash.

In keeping with this legend, on the first day of Magha month of the Hindu calendar, the stone Jyotirlinga of the temple is bathed with ghee to keep Shiva warm from the extreme cold of the Kumaon winter. This is how heritage co-exists with legend in Jageshwar. The main complex has two big temples. One is known as Jageshwar Mahadeva temple where we can find two massive stone statues of armed sentinels at the entrance called Nandi and Skandi. This west-facing temple is always teeming with pilgrims. An immortal flame burns inside the sanctum sanctorum.

Here Shiva is worshiped as Balak Shiva, the boy Shiva. One legend has it that Shiva came here for penance and local housewives were attracted to his divine beauty. As they rushed to Shiva for his proximity, their annoyed husbands followed them. Seeing this messy affair, Shiva took the form of a boy to avoid controversy. Thus, till now the deity is known as Bal Shiva or Tarun Jageshwar Shiva.

The oldest and perhaps the most important temple of this group is called Maha Mrinttunjay Shiva, which is east facing. The stone walls are curved with floral designs and human figures. Here, the shivalinga has an eye-shaped opening towards the devotees. As per Skandhapuran and linga Puran, this is the temple from where Dwadash Jyotirlinga was first worshiped by devotees. Chanting of mahamruttunjay mantra inside this temple is counted as one of the most sacred desires of a devotee.

The complex houses a step well not very deep. There is a parikrama path that takes visitors around the complex touching all small and big shrines. The biggest Shiva temple of Jageshwar is situated in a separate and smaller complex with four more temples. Here Shiva is named Dandeshwar Shiva. The huge temple has excellent stone carving on its walls but its deity is not a carved rock.

Here a natural rock is worshiped as shivalinga and that is again decorated by another legend. This legend says that this place was once known as Dwarkaban where 18,000 rishis did penance. Their wives, who were settled near villages, complained to their husbands that in their absence Shiva appears here incognito. On their third attempt, Shiva was indeed captured by them and the women cursed him. A repentant Shiva turned himself into a solid piece of rock. If this is what attracts God-fearing men to this temple, there is another reason why a lover of history and archeology may come here. It is the one linga with four heads and another shivalinga with multiple figures embellished on its outer surface starting from bottom and moving in a spiral row. Century-long vandalism has wreaked havoc on this group of temples built in the 10th Century .Yet since 1999, the ASI had started protecting these gems.

Another group of temples is known as the Kubera. locally, this temple is called Dhanadesa, which is situated at the highest level along with smaller temples like Chandika and Shiva. The Chandika temple enshrines an image of Durga Ashtabhuja, while Kubera temple has an eklinga image. A three-km trek up the hill will take one to another dilapidated temple called Bridha Jageshwar, while Vinayak Khetra temple stands hardly 200 m from the main temple complex.

Most of the temples of Jageshwar are badly damaged, with some left without a deity and the ornamented wooden doors stolen. Credit must be given to the ASI for salvaging many statues and artifacts, which are displayed in a museum near the complex. The museum is a must visit to complete the tryst with a glorious past.