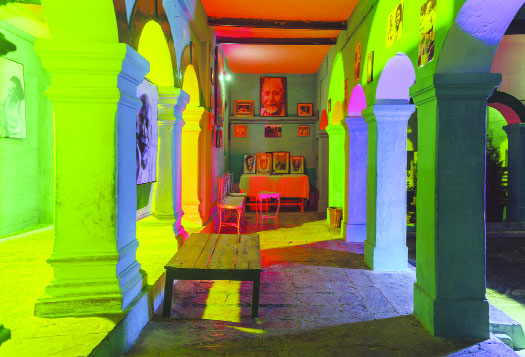 Walk into the gallery and the first thing that catches the eye are artist Nobina Gupta’s archival boxes called Dharohar. Walk a little further and one is transported into the vibrant world of Madina Bhawan through Sandeep Dhopte’s visionary fine-art photography. Step out in the sun and walk through contemporarised wooden furniture crafted by lenny Rubennovitch out of local and waste materials. Adding a musical touch to the evening were the Maihar folk tunes.

All this and more can be seen and experienced at Bikaner House, where  Disappearing Dialogues, a series of interactions with nature, people, culture, practices and objects that are knocking on the doors of extinction has been put up. It was conceived and curated by artist Nobina Gupta who researched for a year in Baghelkhand and Bundelkhand region and surrounding areas of Madhya Pradesh. She, along with 14 Indian and international craftsmen developed cross-cultural and trans disciplinary research, exchanging and co-creating within the local community with contributions of skilled artists.

I met warm and friendly Clare Elizabeth Kennedy, an Australian architect, who spoke at length about the innovative architectural designs of Ichol village in Madhya Pradesh, which she has coopted in her eco-hut. Artist Sandeep Dhopte created a series of interpretation of ragas through photographs, documenting Madina Bhawan, the seat of the Maihar gharana of Hindustani classical music, Baba Allauddin Khan and the vibrant history of Maihar region. He did not know then that Disappearing Dialogues featuring his research would elicit such a reaction. “I chose Madina Bhawan as the focus of my research due to sheer inquisitiveness. And to unravel the brilliance of Indian classical music through legends, including Baba Alauudin Khan, Pt Ravi Shankar and Ustad Ali Akbar Khan who, I feel, the millennials are unaware about. My purpose was to restore the glory of this monument which once resonated with their melodious voice through my skill. At present, there are no musical lessons being organised at that place which once brimmed with the sound of riyaaz. I felt as if one day people decided to leave and abandon the place. However, Madina Bhavan stands still, witnessing the changing times and unperturbed by our ignorance. I did my research in order to represent music visually which led me to raagmala paintings where each sur has a colour code. It came into place as  each colour evokes  a certain emotion. Combining these sur creates a raag which encompasses the tonal range of colours used and depicts a mood. like Raag Malhaar represents green colour as it’s about rainfall and the resultant lushness,” added Dhopte, a Mumbai-based fine art photographer. He took the colour coding from certain ragas and incorporated it into photographs suiting Madina Bhawan’s interiors using his sensibility.

Kennedy, who studied traditional Indian vernacular architecture understanding the techniques of craftsmanship and mud houses around Maihar, said,  “My focus is on building with earth in the settlement style of Ichol . I found fantastic examples of traditional earthern architecture that are slowly being replaced by concrete homes. I closely observed their building techniques and researched on the shift from mud houses to contemporary material. I am designing a small eco building, using local material and fusing them with sustainable Australian techniques. It’s simple and cost-effective building and will hopefully inspire localities to continue their traditions. The project is under process and 60 per cent of it is done.” For this exhibit, she showcased architectural prototypes of eco-hut created as 3D models on paper through a guide of architecture in Ichol. She hopes that it will motivate budding architects to move towards sustainable architecture.

Canadian lenny Rubennovitch has created wood furniture out of local and waste material to revive the refined craftsmanship of wood-carving, an enriched tradition under the patronage of rulers and royal families of Maihar. German social activist Ulrike Reinhard spearheaded collaboration between Janwaar kids (an award winning charity project in MP) and Ichol kids to create beautifully designed skateboards with patterns that reflect rural life.

Gupta’s archival boxes are located in the vernacular language of Bagheli which is gradually losing its relevance through generations within the region. “It is interesting how from the Bagheli folk songs and poetry emerges an excellent vision of the land, its history, mythology, bio-diversity, dynamics of socio-cultural practices, reflecting a vivid picture that craves for authentic documentation and archiving. I also conducted a series of art connect workshops on paper kandas — inspired by the gobar kandas which is an integral part of rural life. Paper mache was fabricated in the form of kandas on which children drew about their dreams and aspirations and designs on handmade local khaprels — in villages people locally make and bake them and use it on their roofs. The children drew the design patterns on these khaprels.”

“Madhya Pradesh has a bundle of resources waiting to be extracted and transformed into a piece of art. It’s a state of lost histories, cultures, musical legacies and traditions that are hidden deep within the area. The heritage and culture of indigenous communities should be valued and preserved before it disappears. Traditional practices of organic farming, brick making and forest rejuvenation are excellent examples of alternate techniques for modern man to learn about sustainable living. For this reason, Ambica Beri, the founder of a multi-disciplinary arts centre — Art Ichol — and I collaborated to invite national and international artists, practisng in different fields to come together for a research and collaborative residency focusing on environment, culture, heritage and the indigenous community at Art Ichol, arts centre in Maihar. The artists used their creativity and research abilities to first study disappearing practices and then developed thought-provoking artwork and material in response to their findings,” said Gupta.

She added that this exhibit will create collective consciousness, awareness and impact in the long run. “To take notice of fading cultures and traditional practices around you and preserve it for the future. In earlier times we had a holistic approach and people were skilled in various departments whereas in contemporary times each of us has specialised skills. Sustainability will emerge by including diverse elements present in the environment which we have tried through Disappearing Dialogues.” They have given shape to a multi-dimensional exhibition through interactive platforms such as haats, card games on mythology, videos, calendars, seals and scrolls.

Australian textile designers Trish Bygott and Nathan Crotty explored the meditative aspect of stitch and cloth working with locals of Maihar. They have trained local women and girls around the Ichol villages to develop a line of products —  clothes, jewellery and furnishings along with designer Payal Nath, who has created bags from empty cement sacks. The village women were reportedly asked to listen to folk music of their choice and their colourful threadwork was the result of their state of mind, happy and buoyant. Said Payal Nath, “We were asked to ensure women empowerment in Maihar through community engagement. The women knew no craft and used to make bidis. So, we picked up cement sacks, they did running stitch on it listening to folk music and used colours that inspired them. The co-creators felt the beauty in their own products and its effect made them feel empowered which was sole objective.”

Sculptor Ramesh Chandra carved out four faces, each depicting varied emotions from the navarasas. Rita Banerji’s video short films co-created with the local youth and Abhishekha Krishnagopal’s books on ecological issues are some collaborative works from the grassroots that merit attention. And time.

Said Ambica Beri of Art Ichol, “My vision is not merely to provide inspiring and world class-facilities for artists to work in, but also to bring art out of the limiting white-cube structure of a gallery space. Working with the community, enhancing their skills and being able to support them in finding alternate means of livelihood have always been an important vertical of my arts centre and through the research-based Disappearing Dialogues project, we have been able to reach out to many collaborators, government, artists, local communities and other important stakeholders.” She added that they sponsor five underprivileged artists every year and contribute towards honing their skill.

The exhibition will be on until November 29 at Bikaner House.