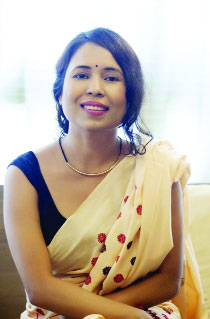 Child actors taught me how to unlearn and be more spontaneous, says Assamese filmmaker Rima Das. By Kritika Dua

Just when we were pondering over  Newton dropping out of the Oscar race, an Assamese film about a 10-year-old girl’s dream to own a guitar despite being born to penury and her battle with adverse circumstances has brought a smile to our faces. A self-taught Assamese filmmaker, Rima Das has won many accolades for her second feature film, Village Rockstars, that has worked its magic at the acclaimed film festivals including Toronto International Film Festival (TIFF), Cannes Film Festival and  San Sebastián International Film Festival.

Interestingly, Das has several feathers in her cap, being the screenwriter, executive producer, editor, production designer, director and cinematographer of the flim.  It was the opening film at the Smile International Film Festival for Children and Youth (SIFFCY). Exclaimed she, “Directing this film was a life-changing event for me. I have given four years of my life to it. I was living in Mumbai since the last eight years and have been travelling wherever my work takes me to. I have grown up in the lanes of Assam and this movie gave me the opportunity to reconnect with my roots. It made me relive my childhood as I was working with children. They have a pivotal role in the shooting process as they kept the mood lively and light-hearted. Also, they were patient enough all this while and believed in me. We shot for around 150 days. It’s a different journey and close to my heart.”

This Assamese director shares a special and emotional bond with the film. And wanted to tap into raw talent. “I auditioned the child actors casually. It was less about the talent and more about their passion and dedication, which I was

looking for.” They taught her how to unlearn, not take things

seriously and be more spontaneous. And most importantly to be free.

She believes that there is talent in every nook and cranny of the country — singers, actors, dancers, musicians et al but the consistency and the zeal to work was her requirement.

Added she, “It was a spontaenous process, be it the auditions or workshops under the blue sky, learning with each scene and from mistakes we made this little film. It was a smooth and enjoyable journey as there was no outer pressure in terms of time limit or money involved that I had to complete the shoot within a certain frame of time. I didn’t have any producer or a financer but I am not complaining as it gave us the creative freedom.” She feels that no one will invest their money in her film as she is still learning.

Das chose Assam as it called out to her. “I shot in Assam as I am familiar with the surroundings, culture, traditions, lifestyle and the people. It was a crucial factor, especially in this film as it talks about a girl belonging to an Assamese village.” She added that if one is not really familiar with the place and the local people, it can get difficult to make an honest piece of work.

With no formal background in direction, she learnt the art by watching and closely observing numerous films. “I think that direction is about telling a story. So, I first wrote this script (2014), which took around six months and then directed it according to my vision. The camera became my eyes in viewing situations, emotions and people. Technicality is just a

formula, a tool helping to give form to one’s vision.” The film was released in September and has been leaving its mark across the globe ever since.