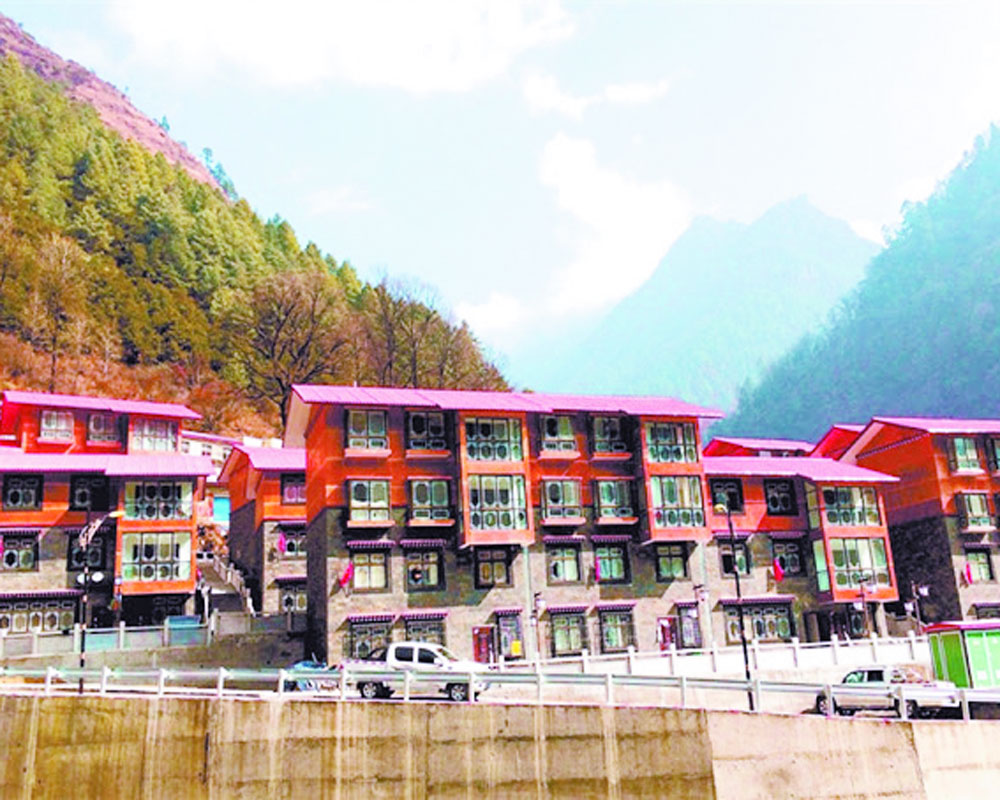 Is China’s building of a large number of ‘model’ villages on the Tibetan side of the Indian border preparation for another stand-off? It’s time to discuss this issue with Thimphu

The 40th anniversary of “China’s reform and opening up” is being celebrated across the country this year as the Chinese propaganda affirms: “Over the past 40 years, the country has transformed itself from a largely agricultural nation into the second largest economy in the world.”

One of the most remembered events took place in 1978, when 18 farmers in Xiaogang village in Anhui Province signed a secret agreement to divide collectively-owned farmland into individual pieces and drop the collectivisation of the Great Leap Forward (GLF), which between 1958 and 1960, resulted in some 40 million casualties; in Xiaogang itself, 67 villagers out of 120 had died of starvation between 1958 and 1960.

Forty years later, the name Xiaogang is been used for a different project, which should worry India: The building of a large number of ‘model’ villages in Tibet, along the border with India.

On October 19, China Tibet News reported that since the beginning of 2018, Tsona County, north of Arunachal Pradesh’s Tawang district, has been “vigorously promoting the construction of border ‘Xiaogang’ villages” (the literal meaning of ‘Xiaogang’ is ‘moderately well-off’).

Tsona County alone has invested 519 million yuan ($74 million) in the construction projects of nine border villages, benefiting 1,961 people from 617 households. More than 40 per cent of the project has been completed and an investment of 2.2 billion yuan ($314 million) has already been spent.

In May, China Tibet News said that Lepo, the first village in Tibet, north of the border in Khenzimane (Tawang district) boasted a rich vegetation and clear waters: “With impressive natural scenery and unique ethnic customs, Magmang ecological civilisation village is also situated in Lepo Valley, Tsona County. …The construction of Magmang ecological civilisation demonstration village began on March of 2014 and was completed on December.” On January of 2015, the village was inaugurated and a year later, Magmang was awarded “China’s beautiful leisure village” by the Ministry of Agriculture. China has 26 national key tourist attractions; the Lepo Valley, close to the Thagla ridge, which saw the first clashes between India and China in October 1962, is one of them.

The new tourist scheme, ‘Slowing down the speed of tour, enjoying the sea of azaleas in Lepo Valley’, prolonged the peak season, explained the Chinese authorities.

Dekyi Tsomo, a 27-year-old villager of Magmang, told the website: “Previously, houses in the village looked fairly run-down, and all roads leading to the village are muddy. Nowadays, the houses we live in are comfortable and big, with underfloor heating and hot water supply. This kind of house costs more than 400,000 yuan. We only pay 120,000 yuan, the rest is paid by the Government. …we all feel grateful.” Incidentally, on March 30, 1959, the Dalai Lama spent his last night in Tibet in Magmang; he was on his way to India. The next day, he crossed the border at Khenzimane. He would certainly not recognise the hamlet.

To understand the mushrooming of Xiaogang villages, one should remember the words of the Emperor Xi Jinping, who said: “Govern the nation by governing the borders, govern the borders by first stabilising Tibet, Ensure social harmony and stability in Tibet and strengthen the development of border regions.”

The villages are officially linked to two themes: ‘Poverty alleviation’ and ‘defence of the borders’. The local populations are said to be the ‘Guardians of the Sacred Land and Builders of Happy Homes’.

Senior Communist leaders regularly visit the new villages; whether in the Lohit sector, north of the McMahon Line, where a memorial for the Chinese soldiers, who died in the Walong sector during the 1962 War, has been erected for ‘nationalist’ tourism; in Metok, near Arunachal’s Upper Siang district or in Yume, north of Takshing in Upper Subansari; all these areas have their model villages, like in Lepo.

During the last few years, Beijing has concentrated on the development of the southeastern prefectures of Nyingchi and Lhoka, bordering Arunachal Pradesh. But now, while the work on the railway line between Lhasa and Nyingchi continues at a quick pace, the development has started shifting westwards, in areas bordering Uttarakhand, Himachal Pradesh and Ladakh.

Beijing wants to duplicate in Ngari what has been done in Nyingchi and Lhoka areas; first and foremost, improving infrastructure of the border and creating Xiaogang villages. Among the three new airports to be soon constructed in Tibet, Purang is located in Ngari prefecture of Western Tibet (one is near Lhuntse in Lhoka and the last one, near the Nepal border). The construction should begin in 2019 and it will be functional in 2021.

The objective of these airports is to strengthen the border’s communications with surrounding areas. Let us not forget that airports and highways on the plateau legally have a dual use (civilian and military).

There is another aspect to the communist party’s policy on the Indian borders: Recalcitrant Tibetans are relocated to places further away from the ‘sensitive’ Indian borders.

An article recently appeared in the French edition of China Tibet Online, titled: ‘Relocation of the villagers of Lhodrak: mission over’.

It affirmed: “After a first wave of successful relocation on October 15, a second wave is now over.” Lhodrak is the legendary birthplace of Marpa, the great saint who visited India several times and translated the Buddhist scriptures in the 11th century. It is located north of the Bhutanese border.

“The villagers’ relocation project represents the completion of a scheme which is part of the strategy of the CPP’s Central Committee for strengthening the border. It is also a good example to illustrate that the party carries the people in its heart, it provides a housing solution to families in need, and a strengthening of the masses on the borders for defence,” said the article.

Tibetans in traditional costumes, probably provided for the photo op, are seen on the accompanying pictures. Some of the Xiaogang villages are located north of Bhutan, near the eastern trijunction between India, China and Bhutan, an area which is disputed.

Could it be in preparation of another Doklam? There is, however, a difference with the western trijunction (Doklam). India has no military presence in the area. The time has perhaps come to discuss this issue seriously with Thimphu.