Of jobs and employment

Of jobs and employment 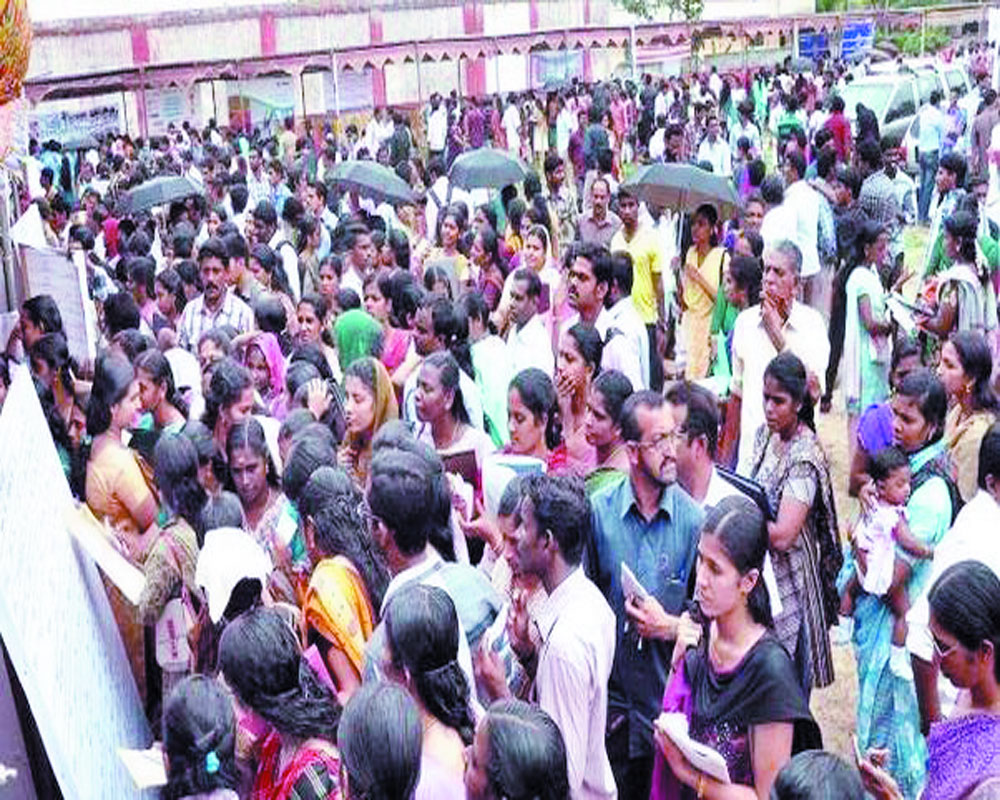 Jobs, jobs and more jobs is the topic of the talk circuit with hardly anyone passing up the opportunity to hold forth, whether in television discussions or in print. Missing in this cacophony of ‘jobs, jobs and more jobs…’ is the issue of income generation and, therefore, occupations that can generate real income. This, the writer believes, is a likely hangover of the middle class perception of what constitutes a good job: Still a white-collar employee going to office from 9 am to 5 pm with a salary, an annual increment and privileged leave, with one’s place of work preferably located not too far from where one’s family resides. Governments, municipalities and panchayats still offer such jobs when their appointment register happens to be open. But even for these state bodies, this traditional concept of employment is outdated, if not altogether on its way out.

An increasing portion of the present business activity is intellect-inspired as distinct from enterprise and finance-based endeavours. The primary machine to aid the intellect in today’s time is the computer. This is not to discount the role of the machine in the manufacturing sector but the truth, though unpopular, is that modern manufacturing units are more employers of machines and less provider of jobs to men and women. One also cannot ignore the factor of depreciation, allowance of which every year makes machinery cheaper whereas employees need to be given increments year after year. Further, with advances in technology, the worker's requirement is reducing. There is also an increasing apprehension of the robot. Such alternatives may eventually replace the human worker. When during elections, politicians promise jobs, it is doubtful whether they go into the details of such factors. Their audience and, especially, job seekers, think of such electoral promises as accommodation in the premises of offices and factories. Obviously, disappointment awaits many of them from the day after the promise. Neither politicians nor the people think in terms of employment as a whole, whether as shopkeepers, taxi drivers, or even vendors who move from place to place to sell. In the world context, 50 per cent of work would soon be self-employment.

Traditional agriculture, once the mainstay of our country’s economy and the provider of employment to the largest portion of its population, is no longer able to satisfy an increasing number of people's need for livelihood. Employment is, therefore, the gravest and most urgent challenge to today’s Governments. The term ‘demographic dividend’ sounds like music to the ear but will actually be so only if economists are able to find new ways and means of absorbing the new entrants. Thus, a great deal of discussion in the country is over growth and development. Little attention is given to the specifics of employment. One possible reason for this oversight is residual effects of the inspiration India’s policy-makers drew from the Soviet era. Gosplan emphasises on the building of heavy industry in the former Soviet Union. India’s plans of the Nehruvian era were direct lift-offs from the Soviet example. However, the Soviet Union was a country with vast land spaces, enormous untapped resources and limited population. Employment per se was not a Soviet problem. We in India overlooked this, although it should have been our greatest priority.

What the imitation of the Soviet model did bring about in India was the creation of a huge bureaucracy to administer plans and other sarkari programmes, ostensibly with noble intentions. It did provide jobs to a comparatively large number of people. But in today’s times, the Government or bureaucratic sector has grown to be too large and ripe for reduction. The private sector grew remarkably after the 1991 economic reforms but employment in this sector demands qualifications, which not every aspirant has. Moreover, in many areas of the country, commerce and industry are yet to become a habit with local populations.

It is time India stops depending too much on Western economics. We must instead innovate Indonomics. Our horse before the cart would be development in order to provide fruitful employment to many people and not the other way round. It should be remembered that this is a globalised world. Almost every manufacturer has to face competition on a world scale. Why not, therefore, also consider promoting institutions that do not have to compete so much, yet at the same time serve the needs of the country?

Take, for instance, tourism. It engages large numbers without the constant tension of automation and job reduction. These numbers do not all require advanced education or high qualifications. Moreover, tourism does not require high investments. One can concentrate on the country’s ready assets like the Ajanta and Ellora caves, magnificent forts like Chittorgarh, the Himalayas and much else.

The next area to tackle should be agriculture where many farms have turned marginal and even unviable. The one immediate answer is upgrading of the type of crop to a higher value from the current cereals and millets. Farming can potentially provide for an unlimited number of cultivators, but agro-industry cannot solve the problem of rural employment. Sadly, this remains a neglected area in India, one that has also been the cause of much socio-economic distress.

Health and education, which are urgent necessities for the people of the country, are also ready avenues of employment. An area of beneficial investment would be building new and expanding existing hospitals which are in any case desperately needed in most towns and districts. The outlay is not great and the employment potential is considerable. Hospitals are quite worker-intensive and several thousand of them are needed immediately.

PricewaterhouseCoopers in a professional survey had recommended that by 2034 India would require 36 lakh beds. Today, not even a fraction of that number exist. Each hospital would need several hundred non-medical personnel and all the hospitals when ready would absorb millions indirectly and help to generate jobs without number. The medical and para-medical staff would be extra. At present, there are only 0.65 doctors, 1.3 nurses and 1.3 hospital beds per 1,000 people in the country. The desired requirement by 2034 for every 1,000 people is 2.5 doctors, five nurses and 3.5 beds. The initial investment in this sector, particularly in semi-rural areas, would be in the range of Rs 10-15 crore for a 100-bed hospital.

Education, the key to furthering India’s rise as a knowledge economy superpower, offers vast possibilities for employment as well. Thousand upon thousand schools would have to be created; their capacity to provide employment should be enormous. India needs two lakh more schools and 1,500 universities and colleges. A whopping 220 million children are enrolled in schools but 140 million continue to be left out.

What is, therefore, necessary is to inculcate the idea of an economic citizen, a self-engineered way of earning a living. Be it as a doctor, lawyer, para-medico, shopkeeper or even a pheriwala or peddler, no one should be dependent on anyone for survival. The Government’s responsibility is to create and sustain the economic environment for the willing self-reliant citizens to have ready opportunities. The Government’s function is to govern and not provide jobs. The size of the bureaucracy need not exceed the demands of administering the country. The price of a heavy or a top-heavy Government would be either high taxes or printing currency leading to inflation. France should serve as an example not to be emulated. Something like 40 per cent of the jobs in that country are provided by its Government directly or otherwise.

In today’s milieu and the times to come, no country can survive long as a prosperous modern state with such a skewed model.