Search and rescue on the high seas

Search and rescue on the high seas 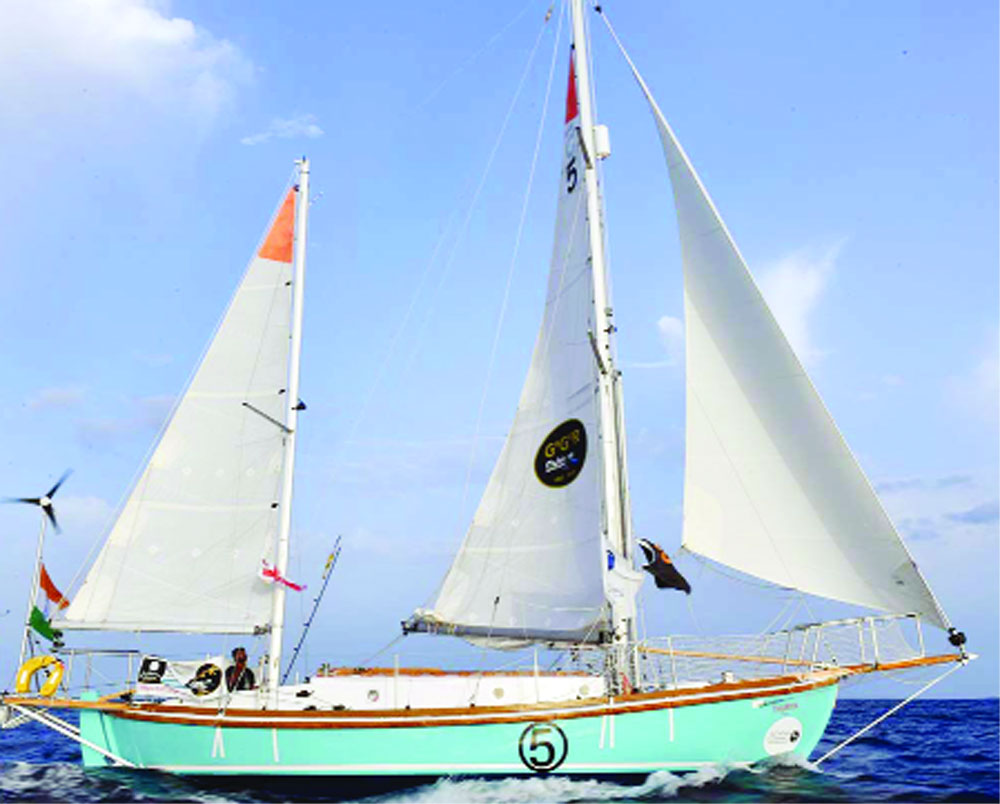 Rescue on high seas can also be highly political and divisive. But maintaining good maritime order can only be ensured with jointmanship as demonstrated by the timely rescue of Commander Abhilash Tomy by both the French and Australian navies

Befittingly, the hardened men-in-white of the Indian Navy promise ‘an ocean opportunities’ as they tease the Josh-types to choose between becoming ‘General Manager Arun Kumar’ or ‘Commander Arun Kumar’, in their luring advertisements. For eons, sayings like “hearts of oak are our ships, gallant tars are our men”, have romanced the young and seeped into their bloodstreams before luring them into the Navy — a decision that they seldom regret.

One such seafarer with the wanderlust for the open oceans and brazen adventures is Commander Abhilash Tomy KC, a quintessential Indian Navy man who had braved come-hell-or-high-water as the first Indian to sail and circumnavigate across the globe solo, non-stop and unassisted in 2013.

The expanse of 23,000 nautical miles across four oceans had taken 150 days for Tomy’s sheer daredevilry, earning him a Kirti Chakra for gallantry. Such restless seafarers are cut from a different cloth, where the spirit of challenge never dims and on July 1, 2018, Commander Abhilash Tomy took to sails again in the Golden Globe Race, which pits 18 of the finest and fittest sailors from across the world in a grueling round-the-globe challenge.

Except this time, fate and nature had different plans and his 36-foot boat, Thuriya, was hit by an extreme storm with 80 mph winds and 46-foot sea waves that left the tireless yachtsman, badly injured and in desperate need for rescue.

Since time immemorial there have been traditions and unwritten codes of seamanship that governed the conduct of rescue in high seas, and in 1979, an international convention pertaining to search and rescue (SAR) was adopted for the rescue of persons in distress at sea.

The common procedures, protocols, pooling of resources et al were established to ensure a robust mechanism. In this particular rescue operation that occurred a good 2,000 miles off the coast of Australia, help was taken from the French and Australian elements, besides the Indian Navy committing its own resources. Finally, it was the French patrol vessel, Osiris, that reached Abhilash Tomy, as the Indian long-range P8 Poseidon reconnaissance aircraft kept circling overhead.

India heaved a collective sigh of relief as the Indian President took the lead in rightfully thanking the foreign navies for their unstinted rescue efforts and obvious, spirit of seamanship. The parallel spirit exhibited by Irish yachtsman and fellow-competitor Gregor McGuckin and Estonian yachtsman Uku Randmaa, in making efforts to reach out to Abhilash Tomy, were in keeping with the sportsmanship, seamanship and camaraderie at its finest.

This unique race that is a virtual ode to the oft-forgotten DNA of sailing in the era of modern technology and aids, deliberately disallows any technological help and affords simple reliance on stars, sun and a magnetic compass to navigate the frequently punishing and choppy waters.

This was in stark contrast to the horrific tragedy which struck the supposedly ‘unsinkable’, Oscar-class Russian nuclear submarine, ‘Kursk’, where all 118 personnel on board had died in 2000. The sinking of the pride of the Russian fleet had been vociferously criticised for its slow, inept handling and delay in accepting help from foreign navies in the vicinity of the said accident. It was only on the fifth day of the disaster that Russian President Vladimir Putin had agreed to take British and Norwegian help.

Even then, the Russians enforced certain constraints on the Norwegian team from desisting on working on the stern of the submarine, even though the rescue team thought it impeded the rescue operations, especially since the fate of all the crew members had not yet been fully established.

Later, head of the Kursk incident cell, Vice Admiral Vladislav Ilyin concluded that some of the crew had lived up to three days and the formal investigation had slammed the delay in rescue operations.

Rescue on high seas can also be highly political and divisive. Successful search and rescue operations of the fleeing Middle Eastern and North African immigrants onto to the European lands was seen as a ‘pull factor’ for more immigration. Even though reports from agencies like Médecins Sans Frontières (MSF) countered the allegation with data that showed that defending humanity at sea did not deteriorate maritime safety and only saved lives — the haunting image of the washed-ashore body of a tiny three-year-old Syrian boy, Alan Kurdi, pricked the collective conscience of the Western world.

Countries like Australia have aggressive ‘turn back’ and ‘push-back’ policies for incoming asylum boats. Closer home, the Rohingya ‘boat people’ or the ‘nowhere people’ are also a subject of much debate and polarisation. While Thailand has a strict push back policy for fleeing Rohingya’s by boat, others like Malaysia, Bangladesh and India, remain more nebulous in handling the issue.

Earlier this year, the Pakistani Navy is said to have provided “medical and humanitarian assistance” to 12 Indian fishermen who were stranded and lost for eight days after developing engine trouble, whereas last year the Indian Navy was involved in saving a Chinese merchant vessel  from pirate attack in the Arabian Sea.

In March this year, the Indian Navy held the 10th edition of MILAN Exercise, entailing 20 ships from nine countries, off the coast of Andaman and Nicobar Islands. Besides enhancing interoperability and exchanging best practices, search and rescue operations and medical evacuation drills were part of the training.

HMAS Larrakia (ACPB 84) of Australia was one of the participants in the biennial congregation of friendly navies. Maritime good order can only be ensured with such jointmanship in the high seas as the timely rescue of Commander Abhilash Tomy demonstrated by both the French and Australian efforts, besides the obvious blessings of Varuna, the God of skies and oceans.

As the passionate seafarer Commander Tomy would probably agree: “On life’s vast ocean diversely we sail. Reasons the card, but passion the gale.”