The big churn in Dhaka

The big churn in Dhaka 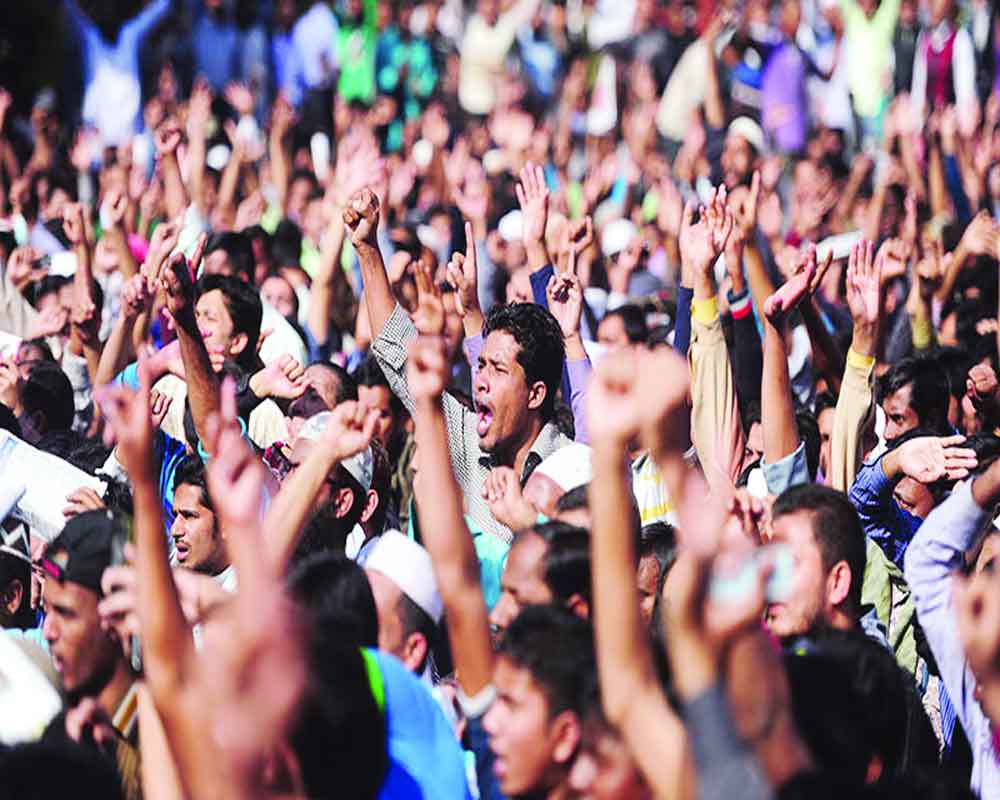 As parliamentary polls in Bangladesh draw closer, let’s take a look at the dynamics of terrorism and study the response of the state, right-wing lobbies, Jamaat and other pro-Pakistan leaders

Deferred by a week, following the hanging of top Jamaat leaders for their involvement in war crimes in 1971, the Bangladeshi parliamentary election, now scheduled to be held on December 30 instead of December 23, will be a turning point in the nation’s political history. Since early this year, security forces have been on guard to manage the tidal violence in the country, even as the Jamaat-e-Islami continues to be outrightly  hostile to Awami League cadres. So, if the Bangladesh Nationalist Party (BNP) wins the general election and comes to power, the Jamaat-e-Islami, its subterranean ally, will again get a free hand and extract a gory revenge from the Awami League. The BNP had requested that the elections be delayed by a month but permission  to that effect was not granted and the Election Commission delayed it by just a week.

The inner dynamics of the elections were captured by a senior Bangladeshi watcher who noted: “People are eagerly waiting to cast their votes in the next election. Anti-incumbency and corruption are the major factors that are likely to go against the (ruling Awami League) Government. Instead of focussing on issues that affect the public, the Opposition’s agenda is limited to releasing its jailed BNP chairperson and have a caretaker Government. It is not clear whether the BNP will participate if its demands are not met. The Government is likely to benefit from Opposition disunity and lack of vision.”

The BNP’s demand for a caretaker Government, however, is in itself impossible as the nation’s Constitution has no provision for the same anymore. While the Sheikh Hasina Government has banned the Jamaat-e-Islami from contesting the elections, its members have circumvented the clause by propping up the Opposition ranks, which includes the BNP platform with which they have had a coalition Government in the past. After the 2001 parliamentary poll, the BNP-Jamaat combination unleashed  widespread violence, especially against the Hindu minority in Bangladesh which mostly supports the secular Awami League.

Even as the Jamaat uses every opportunity to target the Hindus, especially by levelling false blasphemy charges, a certain section of the Hindu feudal class supports the BNP-Jamaat combine as well. Some notable examples among them are BNP Standing Committee member, Gayeshwar Roy, and the party’s senior foreign spokespersons in London — all of whom belong to the Hindu community. Some of the party’s foreign associates, including a hardliner like William Nicholas Gomes, changed their faith to Christianity so that they could spread the Jamaat’s propaganda more easily in British networks. Gomes now writes for a few major international media outlets.

It is worth noting that the Jamaat even now has a hold over the BNP cadre. Interestingly, one can spot more flags of the Bangladesh Islami Chhatra Shibir (Jamaat’s student wing) at BNP rallies than those of the BNP.

The BNP was formed on September 1, 1978, by President Ziaur Rahman after Sheikh Mujibur Rahman’s assassination on August 15, 1975. Successive military Governments of Khaleda Zia, Hussain Muhammad Ershad and later the BNP-Jamaat, too, actively sponsored militancy in India’s North-East in cahoots with Pakistan and China. Ershad, who is the chairman of the Jatiya Party, has now softened his anti-India stance considerably. Even when in power, as the head of the military Government, Ershad was not virulently anti-India.

Commenting on the elections, Barrister Mohibul Hasan Chowdhury Nowfel, Organising Secretary, Bangladesh Awami League, said: “For years, Kamal Hossain used to complain about the BNP-Jamaat combine operating terror outfits out of Hawa Bhavan, the base of Tarique Rahman. Hossain was against Hawa Bhawan politics and took a critical stance against it. However, after a while, he went quiet suddenly. Now, Hossain is simply trying to take advantage of the leadership vacuum in BNP. But by doing that, he has started giving legitimacy to the criminal activities of BNP.”

Meanwhile, Bangladesh has always witnessed foreign interference by Pakistan in its political process. This has intensified after the trials of senior Jamaat-e-Islami leaders who were involved in committing atrocities through death squads (razakars), allied with the Pakistan Army during the 1971 war.

Stating that Pakistan’s diaspora and intelligence community are actively assisting the BNP’s convicted leadership in London, Barrister Mohibul Hasan Chowdhury said, “These people, especially Tarique, are convicted and absconding from justice. Pakistan used to provide them with financial assistance earlier. Now, it has expanded aid in the form of huge diplomatic assistance. However, except for certain elements in Pakistan’s intelligence agency, the Inter-Services Intelligence (ISI), even within Pakistan the BNP-Jamaat does not enjoy support from the civil society or the politicians. They are more or less shunned by civil society and politicians in Pakistan. Now, it is just an alliance of evil.”

It is worth mentioning that the Pakistan military and ISI generals routinely settle in the West post-retirement, to live off the often-illegally made gains during their tenure in Pakistan. Earnings are channelised either through drug trade commissions or activities that Pakistan’s military establishment remains engaged in, or the various military businesses it runs, marginalising the general population.

There are multiple credible books and papers on Pakistan’s use of its biraderi networks in the UK to lobby and even influence local politics. One such seminal paper is that of Delwar Hussain titled, ‘Globalisation, God and Galloway: The Islamisation of Bangladeshi Communities in London.’ In his report, Hussain discusses how Pakistan’s diaspora successfully got third generation Bangladeshis in its fold after the Western attitude towards Muslims changed post 9/11, which is remarkable because their parents had classically been anti-Pakistan due to the memory of the 1971 war. The paper also touches upon the opportunistic politics of Galloway and his defence of convicted war criminals of 1971.

As regards India, if the BNP comes back to power by rigging elections through violence, it would take India back to the 1980s in Bangladesh’s calculus. There will be no power centre that’s pro-India. The only bright side is that there are sections in the senior military brass that are well disposed towards us. Like in the past, support to militants in India’s North-East and Islamist terror outfits like Harkat-ul-Jihad al-Islami (HUJI) and Jamaat-ul-Mujahideen Bangladesh, that work in concert with the Lashkar-e-Tayyeba, would be revived with active support and direction from Pakistan’s ISI. Drug trade and counterfeit notes have for long dominated India’s border belt which are Jamaat strongholds and are again run with active support from the ISI.

Even though the BNP claims that it won’t work against India, can it be trusted? For they made similar claims in 2001, too, and as soon as it returned to power, its State Minister for Home Affairs Lutfozzaman Babar was involved in the Chittagong arms haul destined for militants in India’s North-East.

(Aveek Sen is an independent journalist working on cyber security and the geopolitics of India’s neighbourhood, focussing on Pakistan, Afghanistan, Iran and Bangladesh. Prateek Joshi is a Research Associate at VIF)