The curious case of Demchok

The curious case of Demchok 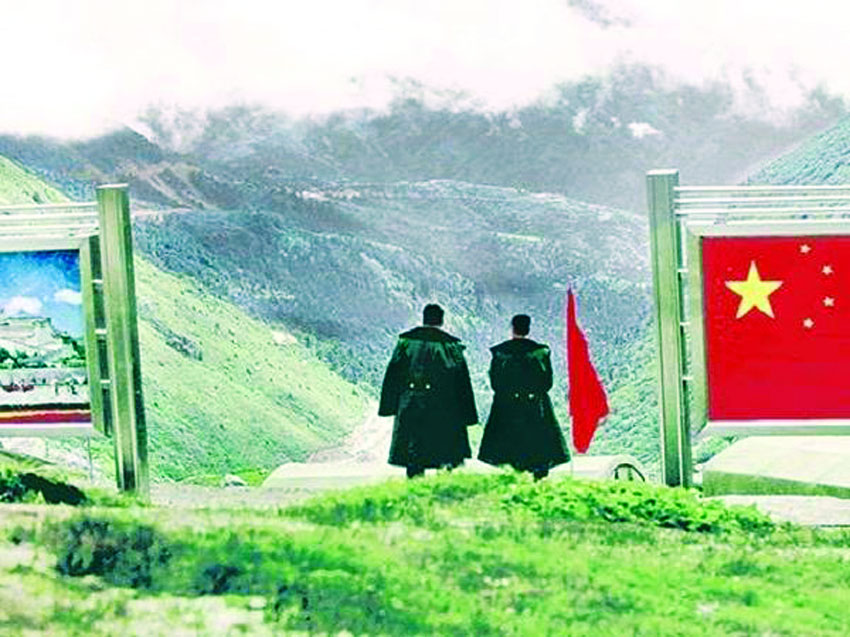 Of course, the Chinese intrusions into Indian territory are not innocent. Solutions are there which lie in the re-opening of the Demchok route. But is China ready to do thisij

Despite the Wuhan consensus (or ‘Wuhan spirit’) arrived at after the one-on-one meeting between Prime Minister Narendra Modi and President Xi Jinping in Hubei Province in April, China continues to needle India at different places along the 4,057-km line of Actual Control (lAC). last week, it was reported that the People’s liberation Army (PlA) intruded some 400 metres inside the Indian territory in the Demchok sector of eastern ladakh and pitched five tents.

After a flag meeting between the local Brigade commander and his Chinese counterpart, the PlA accepted to remove three of the tents from the Cherdong-Nerlong Nallan area. It is said that a few ‘Chinese troops in civvies’ camped in the two remaining tents.

The Economic Times reported, “in the garb of nomads with cattle in tow, [the PlA] had intruded into the Indian territory in the first week of July and did not retreat despite Indian troops repeatedly conducting ‘banner drills’.”

The ‘spirit of Wuhan’ had clearly been forgotten.  One could ask: Is President Xi suffering from amnesia or is a local commander not aware of the ‘consensusij’  The latter would mean that Xi has not full control over the PlA, which is serious matter.

Demchok is special because for centuries, it has been a part of the kingdom of ladakh and later of the Jammu & Kashmir state. On August 14, 1939, as he camped near Gartok, Dr Kanshi Ram, the British Trade Agent (BTA) in Western Tibet, reported to his boss, the political agent of the Punjab hill States in Simla. A few days earlier, he had begun his journey to the Tibetan border. He was accompanied by the Wazir Wazarat (District Commissioner) of ladakh; both were to meet the Garpon (Governor) of Western Tibet for a tripartite inquiry into the alleged murder of a Tibetan.

They reached Demchok, the last ladakhi village before the Tibetan border, on July 17; a few days later, Dr Ram reported: “On the night of July 21, the stream by the side of which we were camping suddenly rose to higher level and began to flow over our camping ground at midnight. We were abed as alarm was raised and …had to keep awake throughout the night. The next morning we crossed the stream and camped on the Tibetan border at a place of safety.” The ITA added: “This stream forms a natural boundary between Tibet and Kashmir at Demchok.”

This is interesting because it shows that before the Chinese invasion, the Indo-Tibet border in ladakh was well-defined and agreed upon by the Government of British India (represented by the BTA), the State of Jammu & Kashmir (the Wazir) and the Tibetan Government (the Garpon).  Already, in 1684, after a war between ladakh and Tibet, the Treaty of Tingmosgang had affirmed that “the boundary shall be fixed at the lha-ri stream of Bde-mchok.” Bde-mchog was clearly Demchok.

After entering Tibet in the early 1950s, the Chinese ‘advanced’ into the Demchok sector, though no Chinese had ever been seen in the area earlier and a very large area around Demchok started to be claimed by Beijing.  In 1954, long negotiations preceded the signature on the ‘Agreement on Trade and Intercourse between Tibet Region of China and India’, known as the Panchsheel Agreement for its (in)famous preamble. The negotiations ended with India giving away all its rights in Tibet, while getting no assurance about a border demarcation from the Chinese Government in return.

During the talks, the issue of ‘trade marts’ were discussed; the Chinese negotiator agreed about Tashigong (in Tibet) and added “you could also have Demchok.” The move was clever: He was offering a Tibetan mart …on India’s territory. TN Kaul, the Indian negotiator, objected Demchok was in India. To Kaul’s utter surprise, Chen answered that India’s border was further on the west of the Indus. On Kaul’s insistence, his Chinese counterpart said: “There can be no doubt about actual physical possession which can be verified on spot but to avoid any dispute we may omit mention of Demchok”. It was a bluff and though Kaul repeated that Demchok was on India’s side, the Chinese did not budge.

On April 22, after more than four months of discussions, the Indian ambassador to China N Raghavan cabled the Foreign Secretary that Zhang Hanfu, the Chinese chief negotiator, had ‘virulently’ objected to inclusion of Demchok in the Agreement. It did not occur to the Indian negotiators to ask why. For centuries, the trade and pilgrimage route for the Kailash-Manasarovar region followed the course of the Indus, passed Demchok, the last ladakhi hamlet, and then crossed the border to reach the first Tibetan village, Tashigong, some 15 miles inside Tibet.

Not only did the Chinese refuse to mention Demchok in the Agreement but bargained for nearly four months not to cite the Tashigong traditional trade route.  In retrospect, one can find two main reasons for the Chinese dragging their feet. One was the proximity of the ‘Aksai Chin Road’; preliminary work on the road had just started at the time of the Panchsheel negotiations. In 1954, Indian border forces visiting Demchok would have noticed that a road was clandestinely being built on Indian territory.

The second reason is as grave and is presently relevant.  After months of infructuous exchanges, Zhang Hanfu conceded that “traders customarily using this route might continue such use but an oral understanding to that effect between two delegations would suffice, [China] would not like in writing, even by implication, to have any reference to ladakh.” It meant that China considered ladakh a ‘disputed area.’ Kaul informed Delhi: “We have taken [the] position that ladakh is Indian territory and route should be mentioned as its omission would be invidious.” But China did not accept the Indian contention and “after considerable argument [Zhang] agreed, but subsequently withdrew [his agreement].” India had finally to concur to the Chinese formulation. Demchok was mentioned nowhere. The present incursions are not innocent.

Is there a solutionij Considering the ‘Nathu-la’ effect, reopening Demchok route could be an excellent Confidence Building Measure (CBM) between India and China. Remember the skirmishes in Sikkim before the Nathu-la pass was opened in the 1960sij When the pass was officially reopened to trade in July 2006, it had the effect of fixing the border, drastically reducing the tensions, at least in this particular area. But is China ready to do thisij