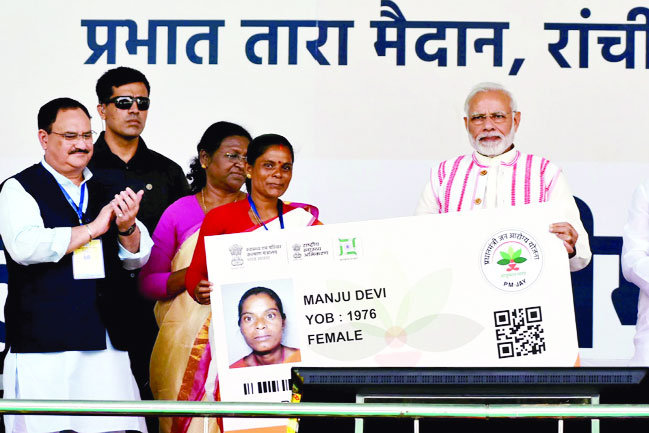 Track-record of the Modi Government shows that it has announced a plethora of schemes only to forget them later. The recently launched PMJAY scheme does not hold out much hope either

In Brazil, there is a famous story about a footballer named Carlos Kaiser. Brazil is synonymous with producing famous footballers but Kaiser was unique because in a career spanning over two decades, during which Kaiser played for some of the biggest football clubs in Brazil and overseas, he hardly ever kicked a football. What he completely lacked in skill, however, he made up with an ability to always say the right things and essentially trick people into believing that he was a Brazilian superstar and a football great. Eventually it was proved that he was neither.

It was ironic then that in the same week that I read this interesting tidbit of football history, Prime Minister Narendra Modi launched ‘Ayushman Bharat’, which has two components: The Pradhan Mantri Jan Arogya Yojana (PMJAY) and the creation of 1,50,000 “health and wellness centres”. Let’s talk about the creation of 1,50,000 health and wellness centres first. The amount allocated by the Government for the setting up of 1,50,000 centres is Rs 1,200 crores, which amounts to Rs 80,000 per centre, assuming the allocation is for all the centres and not just those to be set up this year. As Jean Dreze put it in a recent article, this is barely enough for a paint job on each of these centres.

With respect to the PMJAY, it is important to examine issues so that we can see beyond the typical political catch phrases of the Government. While there is no denying that universal health care is a goal that India must make a priority, there is also no denying that previous Governments have had pursued similar initiatives in the past. While some of these initiatives, including the ones introduced by the United Progressive Alliance (UPA), have not achieved the heights that one expected them to be for a variety of factors, such as creation of ghost beneficiaries and ill-equipped hospitals, the fact is that the PMJAY will face the same hurdles.

While launching the PMJAY scheme in Jharkhand, the Prime Minister made it sound like it is a first-of-its-kind scheme to be launched in India. In fact, the PMJAY is essentially a Government-sponsored insurance scheme. It aims to cover 10 crore families (which is approximately 50 crore people) and provide each family with medical coverage worth five lakh rupee per family. The Government expects the cost for implementation of this plan to be split 60:40 between the Centre and the States. Since healthcare is a state subject, to examine whether the PMJAY is indeed unique, one need not look beyond the schemes implemented the States.

In this regard, approximately 17 States,  including Punjab, Madhya Pradesh, Jharkhand et al have already adopted a model of Government support insurance schemes similar to the PMJAY, which are now expected to be incorporated into the PMJAY. Therefore, it is obvious that there is nothing particularly unique about the actual nature of the scheme. However, problems with implementation are fairly characteristic and unique to the Bharatiya Janata Party (BJP) Government.

The problem with the PMJAY are two-fold. First, the actual Budget of the scheme and how it seems far removed from reality. Second, the atrocious track record of this Government  which for the past four-and-a-half years has announced programmes with reckless abandon and has shown no consistency to follow up on them.

On the actual numbers involved, the PMJAY seeks to cover 10 crore families with a medical coverage of Rs 5,00,000 per family. Now for the sake of argument, let us work with bare minimums. Let us assume that only 10 per cent of the poorest 10 crore families take up this scheme, which is one crore families. Out of these one crore families (which is approximately five crore people), let us assume that only one person per family avails any health services,  which equals to one crore people availing the benefits of the scheme; this is approximately two per cent of the total number of people that PMJAY seeks to cover.

Let us then assume that this person is afflicted with some heart related disease since this is one of the most common health problems plaguing Indians today. Using exceptionally conservative estimates for treating any form of heart disease, let us say the cost of the treatment is approximately Rs 30,000 per patient. This means that the Government and the insurance companies will have to fork out Rs 30,000 crore for treatment of only 10 per cent of the individuals that are covered under this scheme. The budget allocation for PMJAY in 2018-19 is just Rs 2,000 crore. How exactly is the Government planning to make up for this deficit?

Even if the Government, following the insurance model, uses the premiums paid by other families to fund the PMJAY, Rs 2,000 crore  will not magically change to more than Rs 30,000 crore. This, by the way is the most conservative estimate. This fact, along with the timing of the scheme, suggests that the PMJAY is just another election tool of the BJP.

In addition to the basic problems associated with implementation and the Alice in Wonderland calculations of the BJP Government, the biggest problem I foresee in execution of the PMJAY by Modi and his Government is the Prime Minister himself and his Government. What I mean by this is that the BJP in the past few years has announced a variety of schemes with huge fan-fare. All of these schemes were announced as if they were a panacea to all of India’s ills. However, ultimately, it turned out that most of the energy of the Government went in announcing the scheme rather than implementing it.

For analysis, let us look at some of the BJP’s flagship schemes, ie, the Swachh Bharat mission, the Smart City Scheme and the Pradhan Mantri Awas Yojana. In the Swachh Bharat scheme, Modi promised to spend Rs 1.34 lakh to build 11.11 crore toilets in the rural areas by 2019. However, as of 2016, only 0.8 per cent of this target was met as the Government built only 95.23 lakh toilets. Similarly, the implementation of the Smart City scheme does not inspire much trust. After announcing this scheme, the Government has allocated only 70 per cent of the budget, and only 10 per cent of the amount that has been allocated has actually been utilised.

In the case of Pradhan Mantri Awas Yojana, a total of one crore houses are supposed to be constructed for the urban poor by 2022. However, in reality, upto 2018, only 16 per cent of these houses have been sanctioned so far. This is just with respect to a few. There is enough data on the Pradhan Mantri Jan Dhan Yojana, the Pradhan Mantri Suraksha Bima Yojana and other schemes of the Government that show a similar trend of setting big goals that the BJP knows well that it cannot achieve, but are just to attract headlines and fool voters.

This sort of track record, therefore, suggests that the PMJAY does not have much hope for success either. BJP president Amit Shah had claimed that the BJP will remain in power for the next 50 years. In reality, to achieve anywhere close to the numbers that Prime Minister Modi claims when launching any new scheme, the BJP will need a lifetime.

To return to the story of Kaiser, he was eventually found out 20 years later as the charade could only be kept up for so long. However, to find out whether the BJP Government is actually committed to solve the problems that face the nation rather than merely being in election mode for the past four and a half years, one hopes that India will not have to wait that long.