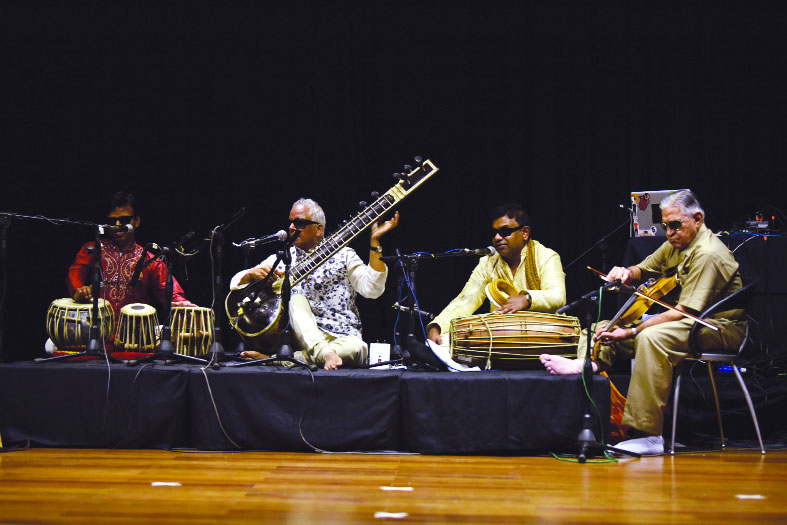 Visually impaired but not lacking in vision — that can describe sitarist Baluji Srivastav’s journey with the British Council to seek out more musicians like him. His latest show, Antardrishti — Inner Vision, a production inspired by the Bhagavad Gita, brings together outstanding blind musicians and dancers from throughout India.

It is a global performance  that merges the harmony of the West with that of the East. Performing with the group is his Inner Vision Orchestra.

The maestro said that the performance is based on Chapter 11 of the Bhagavad Gita in which Lord Krishna grants the Pandava Arjuna divine vision, a theme close to his heart. “I chose the Bhagavad Gita, which was the essence of Mahabharat. The chapter 11 was specially divine. It was written 5,000 years ago and is still relevant,” he said.

The performance will explore the complex interplay between light and darkness, examining what is sight and sightlessness. For the performance, he will be collaborating with Addictive TV, who are  innovative digital artists and have used visuals and videos to create music that you can see.  The use of multimedia through dance, music and digital format takes the audience on a sensory journey. Addictive TV will be using creating a digital canvas allowing the musicians to engage with their previous sample recordings. “We don’t see what they have shot but we can recognise by the sound, which reiterates my point that we don’t need eyes to see,” he said. “Even in my orchestra, we only hear each other to make links,” he added.

The musician, while delighted to be able to return to India annually to perform, laments that musicians are not honoured enough. While he has been recognised by the United Kingdom government with the Order of the British Empire, he still aspires to be given a Bharat Ratna in India. But he does say that the situation is improving in the country.

Asked if he faced any struggles bringing together his orchestra, he answered in the negative. “I made the orchestra in London, which is a cosmopolitan city. It was a little difficult to find blind musicians but we searched across the globe,” he said.

While working with Western musicians, he’s faced no difficulties despite there being less space for improvisation in the Western music tradition. Practising together for hours has made the performances flawless.  “Indian musicians learn to improvise that helps us to synchronise with all musicians. There are only seven basic notes,” he added. “It can be difficult for them because we have 14  and 18 beats. They don’t have complicated rhythms,” he said. “They have harmony while Indian music has melody. The two are like brother and sister,” he added. The maestro can play multiple Indian instruments, including the sitar, dilruba, surbahar, pakhavaj and tabla.

The British Council and he have been coming to India since 2013 with different groups and projects. In 2013, they went to Kanpur and found local musicians who were visually impaired and next year they went to Kolkata, then Chennai, Bengaluru and Gujarat in subsequent years to spread his message.

“We are delighted to work with Baluji Shrivastav OBE and we are honoured to bring the inspirational performance of Antardrishti – Inner Vision, the multimedia interpretation of the Hindu philosophical epic, Bhagavad Gita, to India. We hope that this performance will evoke the spirit of the superhero in all of us as it celebrates the equal contribution made by the differently-abled people to all our communities. We’ve been inspired by India every day of the last 70 years — by its artists, performers and musicians we’ve worked with across India and are excited at the prospect of helping people get inspired by Balaji and other visually impaired artists from UK and India,” said Tom Birtwistle, Area Director — North India, British Council.

The event will also take place at The Royal Opera House in Mumbai on  September 17.