Inside track to tricks

Inside track to tricks 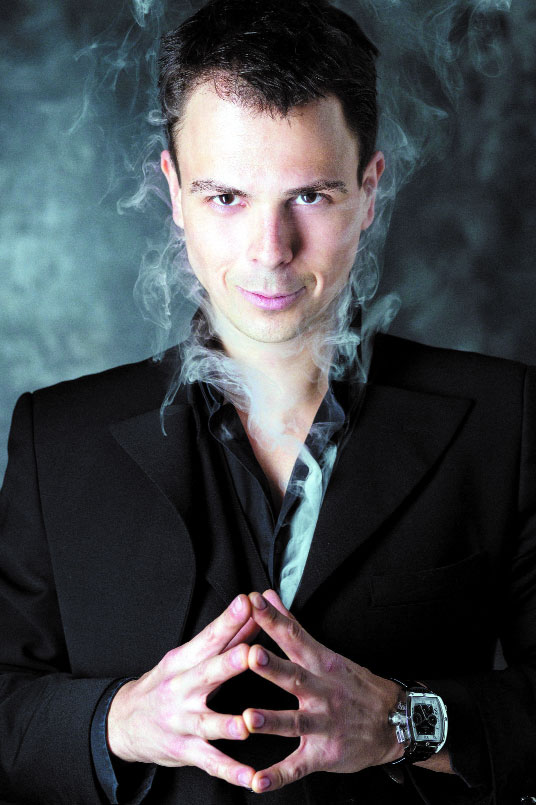 As Russian illusionist Alexander Magu performs in India, he tells Chahak Mittal how it’s all about playing with the mind and pushing its limits

Be it swallowing a 40-centimetre sword through peristalsis, taking rabbits out of a hat, spreading cards on the table and hypnotising the audience to pick the one that the mastermind had already chosen or probably cutting a man into two pieces in a rectangular box and joining him back to perfect shape... In a magician’s world miracles are nothing but illusions.

Illusionist Alexander Magu makes a pit stop in India for the second time to stun audience and share stories of what drove him in the first place to play with the human mind. He narrates his story of how as a 17-year-old boy growing up in St Petersburg, he went crazy over a trick his friend once performed and decided to never return from this winding path of wizardry.

“It isn’t a profession very highly preferred or chosen. It’s all about ideas, imagination and a story-telling capacity to hold the audience,” he told us. The initial years were a struggle for Magu whose parents were reluctant about his career choice. Had it not been for magic, he would “have been working in the Russian Railways.”

So is it only about playing pranks that could amuse people? “No,” he says. “It takes a lot of training and practice to gain expertise in an act. And it is not magic, it is just a play of psychology and mind-counselling techniques.”

Today, Magu loves his job that not only lets him explore the world but also “lets me explore the human mind and its numerous possibilities. The beauty of the human mind is that no matter how fearless it might condition itself to be, it is as fearful, unbelievable yet believable. It’s amazing how certain things can amaze the mind.” He hugely derives inspiration from the masterminds Derren Brown, David Blaine and “of course, David Copperfield.”

For Magu, the art is self-taught and as much about being a seeker. He believes that he is a self-made artist. He says, “I learnt from the internet, books, looking at the other famous illusionists, TV and films. I am all by myself. I have never taken any specific education for this art. With time, I have developed my own techniques.”

Magu even does subtle social messaging. While performing in one of his acts previously, he played with a cigarette and a white scarf, making it disappear and re-appear at unexpected places like nostrils and wrist. In the end, the cigarette was magically lit and on his lips. The message was to make cigarettes disappear from people’s lives forever. However, this moral shift  took a sentimental turn when he said that real magic was all about love, friendship and family.

There was a time when magicians offered the audience a sneak peek into their orchestrated and choreographed acts just to keep the spectacle element alive. This was the reason why shows like Criss Angel Mindfreak, Master of Illusions, Doug Henning’s The Magic Show, Breaking the Magician’s Code: Magic’s Biggest Secrets Finally Revealed became major TV hits. Magu, however, believes that the popularity of magic shows and pranks has still not lessened and “neither it will. It is a very special kind of act that has a lot of future. You can reinvent and push the limit to infinity.”

His tricks include mind-reading, telekinesis, levitation and gravitational illusions. While all these are merely “illusions” and not “magic,” he explains how an illusionist is different from a magician. “An illusionist might leave your eyes wide open and make your jaw drop but a magician can make miracles happen. That’s magic,” says he. From goosebumps, mind-reading, comic magic to a complete theatrical experience, Magu’s show will play “scary pranks” and “play with your memory,” making the impossible seem possible.