Rooting out child marriages in Bihar

Rooting out child marriages in Bihar 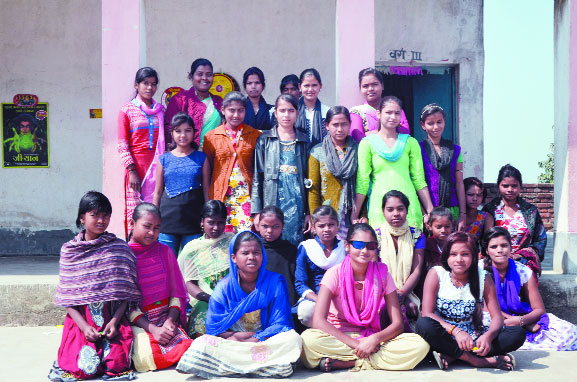 India continues to be home to the highest number of under age brides globally and Kishori Clubs are trying to address the issue in Bihar, says Priyanka Shah

Adolescent-led girls’ groups in Bihar have shown leadership to deal with an issue that affects them directly—child marriage. Over 3,000 girls are a part of the Kishori Clubs set up by the Population Foundation of India, in four blocks of the Nawada and Darbhanga districts in Bihar. The groups have been galvanised as part of a programme to improve the health and rights of the adolescents.

The adolescent girls of the Kishori Clubs raise awareness in their communities and families, and take action to stop child marriages. They have successfully prevented at least 92 child marriages in their villages.

Mausam Kumari, a Kishori Club member from the Nawada district, recounts one instance where they intervened to stop a child marriage. She says, “One day, I received a call from my mother while in college, asking me to come home early. She told me that a 16 year-old girl, in the neighbouring area, was being ‘married off’ and that we should intervene to stop it. After reaching the venue, we found that all preparations for the wedding, including the DJ, had already been set up. We tried to intervene by explaining to the family that child marriage is illegal and that nobody will be happy after the marriage. We said, don’t get your daughter married for your selfish reasons. Giving birth at a young age will put your daughter’s life at risk.”

When the families refused to call off the wedding, the girls involved the police. They then managed to prevent the marriage, along with a signed undertaking, stating that the family will not get their daughter married before she turns 18 years. Mausam says that her life changed after joining the Kishori Club. “Earlier, we were not allowed to leave the house but now, we travel more freely. We have had to be stubborn and fearless to deal with the people judging us, but we have been able to convince others to join the Club as well. The Club allows us to talk about issues we cannot discuss at home. It has given us confidence to be self-reliant,” adds Mausam.

Child marriage robs one of their childhood, an education and the right to live a healthy and safe life. Despite child marriage being a criminal offence, India is home to the highest number of child brides in the world. Approximately 20 per cent girls (15-19 years) in Bihar were married off before the age of 18 years, according to the ‘India Child Marriage and Pregnancy Report’ based on the National Family Health Survey-IV (NFHS) data. Despite all odds, Mausam and her friends continue to exemplify valour in the face of deep-seated prejudice and violence. Safe spaces, like the Kishori Clubs, play an important role in harnessing youth leadership in hard-to-reach communities and empower girls to have a voice of their own.

—The author is programme officer, Population Foundation of India