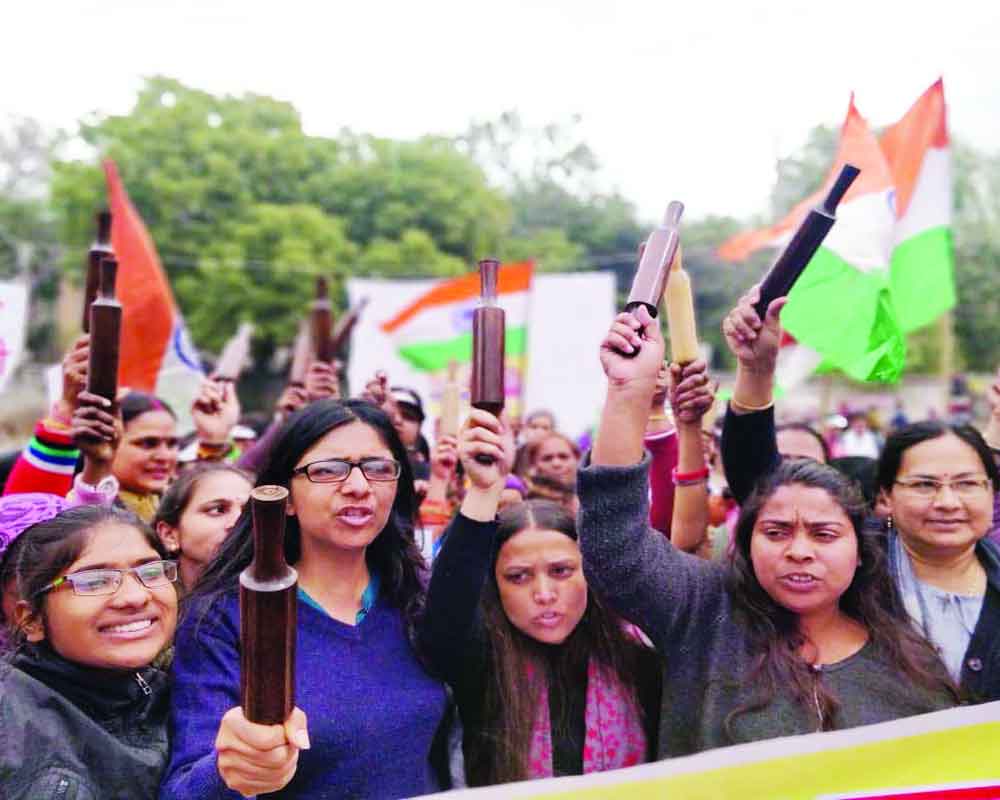 Forget the streets, women are not even safe at home. Gender violence indoors is akin to an elephant in the room. Still, we lack a uniform redressal mechanism

Recently, the streets of Delhi witnessed an intriguing sight — hundreds of women marched on the roads, brandishing huge replicas of belans (rolling pins), to protest against increasing perpetration of gender-based domestic violence and police apathy towards such incidents. The march was part of a Mahila Suraksha Padyatra, launched by the Delhi Commission of Women (DCW) Chairperson Swati Maliwal on February 24, and is scheduled to end on Women’s Day. Maliwal’s aim was to connect with the victims of gender-specific crimes and women from all spheres of life across Delhi, highlight the lacunae in security in the city and seek redressal from the authorities. She also issued a notice to all DCPs over the pendency of domestic violence cases under their jurisdiction. The belan being flaunted by the protesters was a symbolic reminder for women to become self-reliant and use any tool available to defend themselves when facing physical abuse at home. However, it also became an ironic reminder of the inadequacy of the police to protect women from such violence.

According to DCW data, 15,698 cases of domestic violence have been registered over the last five years but chargesheets have been filed in only 5,573 cases, signifying an abject action rate of only 35.5 per cent for such crimes. The gravity of the issue was highlighted by the first wave of the India Human Development Survey (IHDS) in 2005, which collected extensive information on domestic violence as well as women’s earnings and employment that have a direct bearing on abuse against women. The IHDS, jointly conducted by the National Council of Applied Economic Research, New Delhi, and the University of Maryland, USA, is a nationally representative survey covering 41,554 households in 1,503 villages and 971 urban neighbourhoods across India. In an attempt to get to the root of the matter, the IHDS asked women in the sample if “in your community, it is usual for husbands to beat their wives” in the following circumstances: Leaving home without notifying the husband; failing to pay dowry; neglecting household responsibilities; not cooking acceptable meals; and having relationships with other men. While the last, that is, extramarital affairs, was the most common reason for violence, 30-40 per cent of the women interviewed reported being beaten for the other four reasons as well.

The prevalence of gender violence at home is akin to an elephant in the room — it is becoming increasingly rife and brutal in most parts of the country but is still not seen as an issue demanding serious attention. One of the Government’s own leading surveys, the National Family Health Survey (NFHS-4), released by the Union Health Ministry in 2016, revealed that every third woman in India has faced domestic violence of some form since the age of 15.

The passage of the Protection of Women from Domestic Violence Act, 2005, was a welcome measure aimed at tackling the issue, as it comprehensively defines domestic violence to encompass all forms of physical, emotional, verbal, sexual and economic violence. But despite its unimpeachable intentions, this Act seems to have had little effect, as seen from the NFHS report. Among married women experiencing physical, sexual or emotional violence, an alarming 83 per cent claimed that their husbands were the main perpetrators of this abuse, with mothers (56 per cent), fathers (33 per cent) and siblings (27 per cent) of the husbands following in that order. The grimmest aspect of the data relates to the nature of violence itself. As if facing violence from intimate relatives were not terrifying enough, a large number of women experienced extreme physical brutality at home — eight per cent suffered eye injuries, sprains, severe dislocations or burns and six per cent had deep wounds and gashes, broken bones and broken teeth.

The sordid saga does not end here. What is even more horrifying to social scientists and activists working with the abused women is the ratification of such violence by victims themselves. The NFHS-4 shows that 54.8 per cent of the women aged 40-49 years actually justified domestic violence “against wayward women” and even among girls aged 15-19 years, 47.7 per cent agreed for “the periodic need for violence by husbands.”

The IHDS and NFHS data are substantiated by data from the National Crime Records Bureau, last released in 2016. The NCRB reports a whopping rise of 83 per cent in crimes reported against women from 2007 to 2016 and this pertains only to reported crime, with a large number of such incidents surely going unreported. It also recorded a 45 per cent rise in cruelty and violence committed against women by spouses and other relatives during this period. In contrast to the high rates of violence, the conviction rate went up only marginally — from 2.6 per cent to 12.2 per cent over these 10 years. Why is such a large number of perpetrators of domestic gender violence allowed to go scot-free?

Sunita Thakur, a counsellor with Jagori, a New Delhi-based women’s resource centre, argues, “Protection officers are often overloaded with work and have no guidelines for implementing the law.” This argument is corroborated by Anuradha Kapoor, Director of Swayam, another women’s rights organisation in Kolkata, who criticises the involvement of multiple stakeholders in the process, “ranging from protection officers…to service providers… to the magistrate…to a lawyer.”

The other problems include absence of a uniform protocol for recording the cases, poor coordination between the protection officers and police, women’s lack of access to legal recourse  and the prevalence of patriarchal attitudes, which deter the women from reporting crime. Further, the victims are often persuaded by the local police to settle the matter themselves “as it is a personal matter between the husband and the wife.”

How can women overcome these obstacles to justice and live with dignity and peace in their homes? According to an Economic Policy Working Paper, 2013, of the Washington-based American Enterprise Institute, enhancing women’s empowerment in terms of employment outside the home and possessing wealth or property could lead to a notable decline in their domestic abuse by improving the bargaining position of wives vis-à-vis their husbands and producing non-abusive marriage outcomes. Indeed, wife-beating is less commonly reported by working women with the ability to support themselves financially. A growing body of literature also suggests that amendments in the Hindu Succession Act by several States in 2005, which brought girls at par with boys for inheritance of family property, not only empowered women in their households relative to their male kin but also reduced incidences of assault and suppression against them.

Another solution is the implementation of far-reaching legal reforms to provide victims of violence speedy and fair justice. Ensuring greater autonomy for women in every sphere, thus, seems to be a critical step in the fight against domestic violence. Until then, however, they may have to wield the belan more often in their defence.

(The writer is, Editor at the National Council of Applied Economic Research. Views expressed here are personal)