Brexit: The final journey under Johnson

Brexit: The final journey under Johnson 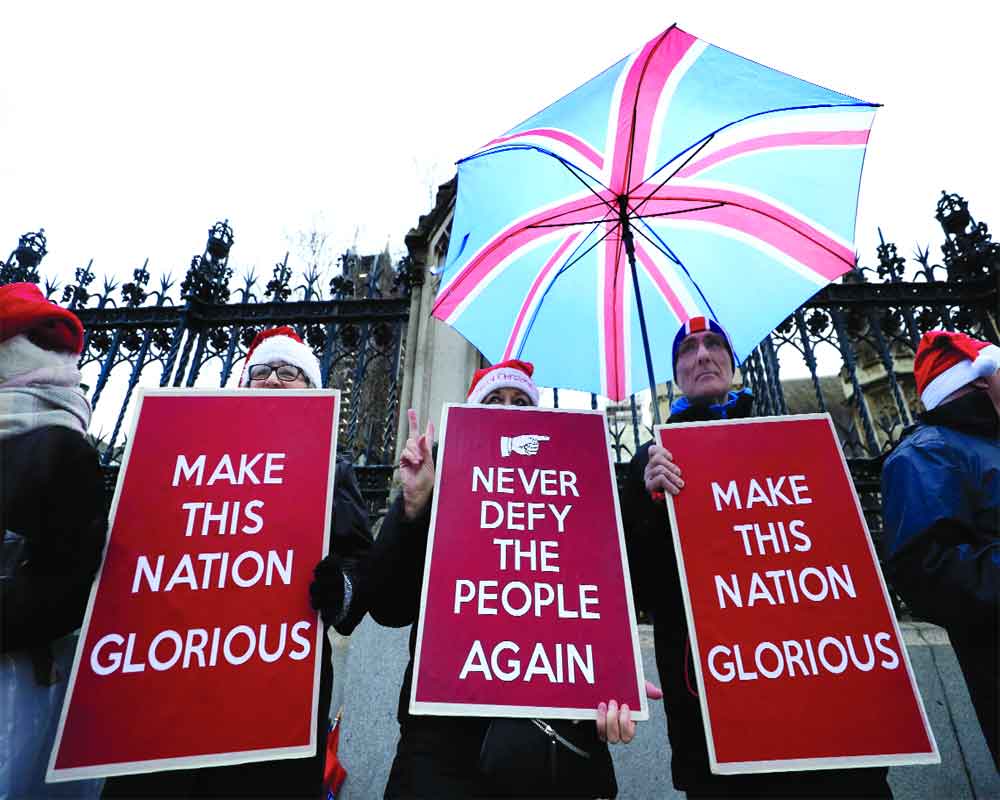 It’s a testing time for Johnson. Moment has come for him to demonstrate not just leadership but statesmanship

Boris Johnson has romped home in the parliamentary election with 365 seats in the 650-member House against the Labour Party’s 203 seats. The Labour Party, under James Corbyn, lost its heartlands, and the Liberal Democrats’ surge failed to materialise.

This helped Johnson-led Conservative Party to clinch a historic victory, only seen last in the 1980s during the era of Margaret Thatcher. For the Labour, this was its worst defeat since the 1930s. Whereas the Scottish Nationalist Party (SNP) won 48 and the Liberal Democrats got 11 seats. When Johnson took over the mantle of the party, the Conservatives were about to be crushed in between the Brexit imbroglio and the Liberal Democrats, leaving behind a terribly chaotic Labour Party under Corbyn. But then, with the election result, he pulled off an extraordinary political manoeuvre of sort. On the other hand, as the Conservatives crushed the Labour’s red wall in the North and in the Midlands, the traditional party bastions, it could safely be concluded that the British voters have categorically rejected the leadership of Corbyn and his ultra-left agenda. The man and his party credentials were viewed even by their hardcore supporters as unpatriotic and profligate. Therefore, it is time now for Corbyn and his party to decide whether to continue moving on the left-wing path to annihilation or reclaim the centre to occupy the power corridors once again.

Now what lies ahead for Corbyn and his Labour Party? After the shocking election debacle, his party has claimed it won the argument and dismissed those who voted against it as morally inferior. Now, the Labour MPs and their supporters are likely to fight for an alternative brand of leadership as he has already signaled that he is not going to be the party face in future elections.

Johnson, a leader known for failing to redeem his promises, has eventually won the trust of millions of ordinary voters who would have never extended such mandate to a Tory establishment. So it is really intriguing how Johnson would respond to the changing political understanding of his countrymen. Today he encounters troubles from many fronts, but for the Conservative grassroots, he is the only hero and stalwart they have been looking for.

Britain’s national discourse and narratives in the post-Johnson victory are worrying signals. First of all, Britain will be out of the EU by the end of January. However the reality is that either the UK can maintain the close economic relations with the EU on which Britain’s prosperity relies on or the Britons can opt for a low-cost regulation that Johnson’s financiers look for. But unfortunately the Britons can’t go for both. Second, the Scottish nationalists have indicated that they are in full control of their turfs. Since they are pro-independence and pro-EU, their revitalisation may soon drag Britain to a future referendum for Scotland’s separation from the UK. Third, as the post-Brexit analysts have already predicted recession in the country, it would be a Herculean task for Johnson’s big promise on public spending. Fourth, Johnson has to navigate a deeply divided party. During his campaign, he projected a no-deal exit from the EU as a potential threat to gain support from the future negotiations. While doing this, he intentionally pushed aside many pro-Europeans within his party, many of whom either will resign from the Government or will be replaced. Fifth, another puzzle for the international community is to see whether Johnson would be able to deliver to those traditional Labour supporters who offered their support to him. Sixth, the National Health Service is on its knees with more than 100,000 vacancies. The Prime Minister has promised 50,000 more nurses, 6,000 more doctors, etc. But once the immigration system is tightened, it would deter foreign workers to fill these vacancies. Again as the PM has vowed not to raise income tax, national insurance or VAT, he is simply narrowing all possible means to gather funds for the Treasury and the NHS. Seventh, gimmicks, half-truths and tall promises showered by Johnson would not be able to rescue the criminal justice system of Britain. As per the Conservative manifesto, 20,000 police officers are due on the roads. But sadly this figure is 1000 less than the 21,000 made redundant since the year 2010. In fact, a strong and effective police force is the demand of the day to tackle the new knife-crime epidemic in some major cities of the country. Eighth, he has to seriously focus on climate emergency as green campaigners urge that the Johnson Government could introduce the ban on diesel and petrol cars by 2030, instead of 2040. Also his administration must deliver on the de-carbonising the homes and other buildings soon. These all could be crucial to alleviate harmful emissions that are fast engulfing Britain. Ninth, another issue that could bother the new Tory establishment is the winning of more nationalist MPs in Northern Ireland. They want a United Ireland while the Unionists want Northern Ireland to remain as a part of the UK territory. This could open a Pandora’s Box for Johnson. Finally, a new trade deal with the US might be a tough task for London as Donald Trump is unpredictable, and he may switch sides at any time as per his convenience.

Johnson’s election slogan, “Get Brexit done” means much more to his voters and other Britons. It simply indicates that the UK leaves the EU in a smooth manner but Johnson said that “It is fair to say that you are getting Brexit done because you are coming out of the EU and you are coming out of the legal order of the EU.” All that what has been promised by Johnson is a cumbersome process. Even some naysayers say, “In sum, the political culture of Britain, as we have known for generations, is earmarked for demolition. Anyone who has tried, however ineffectually, to scrutinise Johnson’s plans or hold him to account will reap the coming authoritarian whirlwind. Trump will no doubt represent himself as this revolution’s enabler and he will be right. But Johnson may well outdo even his mentor: Britain, after all, lacks the protection of a written Constitution. A resilient human spirit that hopes for the best and adapts to circumstances looks sadly inadequate for what is now in prospect (Witney 2019). If this is what is evinced by the Johnson administration, then Britain will witness doom in the post-Brexit period. Barring all these negative vibes, he must not forget the fact that this mandate is given to him and his grand old Conservatives to rescue the country from the Brexit gloom and a radical labour regime led by Corbyn. Many of the strong labour bases offer support to Johnson not to see an uncertain and unruly establishment at 10-Downing Street, but just to come out of the confusion and chaos that the country has been undergoing since the referendum of June 2016.

Truly, Brexit is a rare point of unity and convergence for the rest of the 27 members of the EU, but this could expose the faultlines among them as well. It’s not at all clear how unitedly they could fight the challenges left behind by the departure of Britain from the group. Also, while negotiating new trade deals with Britain, the members of the EU will face difficult trade-offs as they want close economic ties with the country, but with conflicting interests of varying degrees.

What lies ahead is a daunting task not only for Johnson but also for his Conservative Party. It’s a historic mandate for the party and its leadership. Britain needs a clear strategy and pathway to deal with a post-Brexit scenario. However self-destructive convulsions of British politics fomented by the Conservatives, the socialists and the ultra-nationalists around exiting the EU would no way retain the monumental reputation that the country has built over centuries. It’s a testing time for Johnson. Moment has come for him to demonstrate not just leadership but statesmanship.