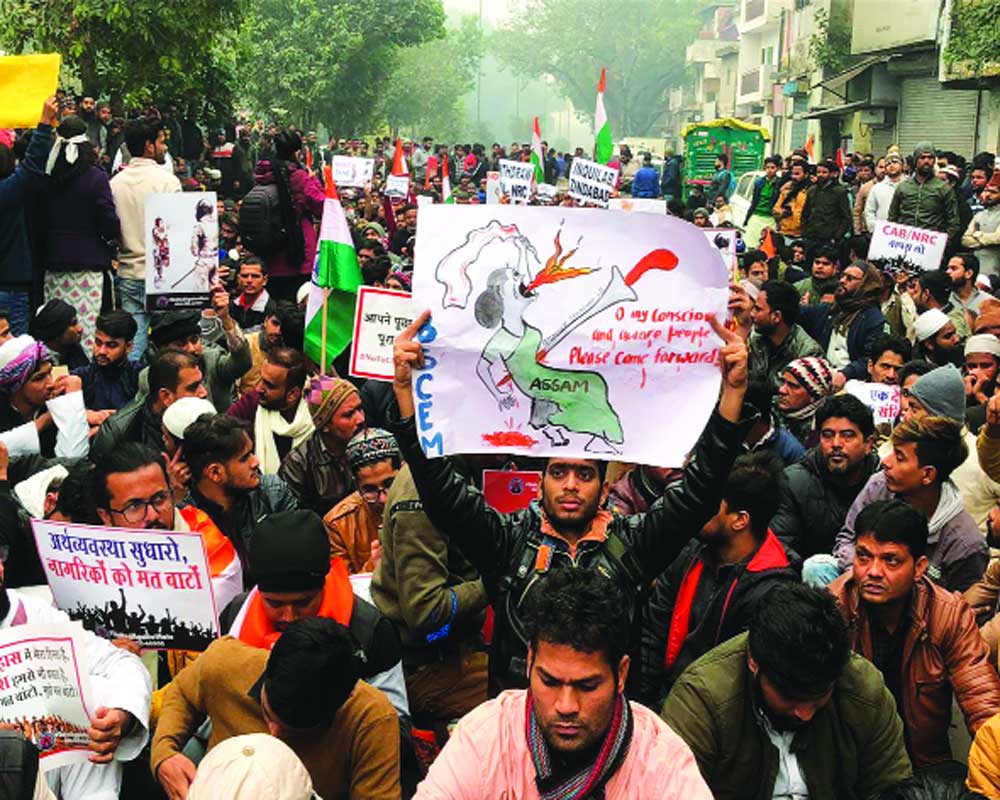 An unjust law is itself a species of violence. Arrest for its breach is more so,” said Mahatma Gandhi. But as the pan-Indian clampdowns on protesters over the segregatory Citizenship Amendment Act (CAA) and the binary National Register of Citizens (NRC) acquire a martial fury, and an activist-scholar holding his picture is dragged away, the father of the nation would seem to have been reduced to an anachronism. Except that his spirit is not as there is a collective outpouring of anxieties nationwide about partitioning the identity of India where co-existence is not just a word but lived in daily life. Perhaps, this version of civil disobedience is for the first time breathing life into a counter-current against the BJP’s monolithism and demonisation of imagined ills. So federal parties and Chief Ministers, fired by students and civil society taking to the streets, are challenging the implementation of the deeply disturbing NRC. And although the Centre may push it down our gullets under the Constitutional cover of it being in the Union List, the Opposition-ruled State Governments have committed themselves to morally question that process. No matter what the official line is about verifying who is an Indian and who is an intruder, the NRC, in effect, means proving our citizenship all over again no matter what our religion is. It involves a complex documentation process, sorting and review, should we fail to meet benchmarks. It is built on a deep distrust of all existing criteria of citizenship with the BJP Government insisting that they, Aadhaar included, have been manipulated by vested interests for votebank politics. Does the NRC list then mean that all our past attempts at census have been flawed and discriminatory? Leave aside the costly logistical exercise in stressed times, the rush for “acceptable” papers has already generated a parallel, dark economy, one which breeds a new societal matrix of privileges and money power. One where you could be pre-judged and dangerously profiled, too. Even with the narrowest margin of error — we cannot have zero error in a country as vast and diverse as India — it has been estimated that millions could be left out just because of procedural oversight. And a bonafide citizen could lose life as he knew it. In that sense, it is a re-purification exercise and a fig leaf for flushing out not just illegal immigrants but scaring the citizenry, be it majority or minority, in general. If we do not make the cut in this blatantly exclusionary document, either because of a lack of papers, some from our grandparents’ times or some perceived inconsistency, a vast majority of Indians could be Stateless and without rights. Rather the intent is to demolish the social plurality of India and impose majoritarian consent by creating a new support base of genuflecting cheer-leaders. And as some citizens could become Stateless, the overnight denial of pre-existing rights of the inlander and the immediate and no-paper admission for outsiders, be they Hindu, Sikh or Buddhist, under CAA present a dichotomy that’s not convincing anybody.

As Delhi Chief Minister Arvind Kejriwal rightly said, 70 per cent of Indians, most of them poor, have no documents to prove their citizenship. An entire generation has been mostly home-born and has no birth documents. Besides, there is still no clear-cut detention policy for the numbers who would be rendered Stateless after such an exercise. Considering the Government’s own commitment to Bangladesh that illegal immigrants won’t be deported there and Dhaka itself challenging India on proof, the only answer would be relocation of these people to geographical backyards. Perhaps they could get a conditional work permit without voting rights. That nobody wants to talk about. While most Congress-ruled State Governments are opposing NRC as a “tool to force people to leave the country,” it is Punjab Chief Minister Amarinder Singh who matches the fire power of his Bengal counterpart Mamata Banerjee in stalling NRC in States. But it is Biju Janata Dal leader and Odisha Chief Minister Naveen Patnaik, known for cushioning the BJP at the Centre for political expediency, who surprised observers by refusing to support the NRC. Clearly, he couldn’t ignore protesters of different faiths who marched from a mosque to his residence. One doesn’t know how far an amorphous people’s movement can sustain itself in the face of brute subjugation but perhaps we as a people need to make a conscience call, honest dissent over dishonest compliance, action over silence.