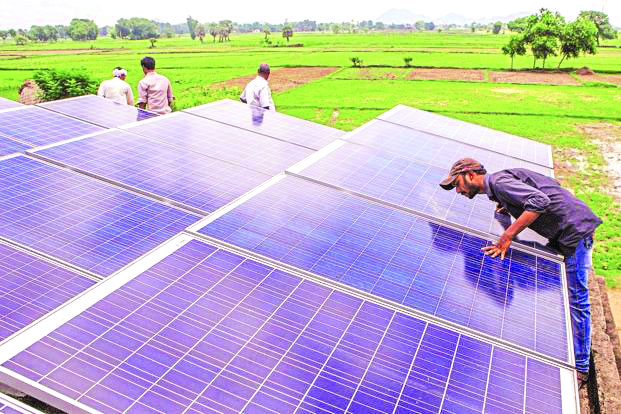 Anti-dumping duty and the non-functioning of a working comprehensive strategy can severely stall India’s move to add a record level of solar power capacity by 2019. The Government must pay heed and adopt an ear-to-the-ground approach

India’s ambitious plans to add 100 gigawatts (GW) of solar energy capacity by 2022 seem to be running aground. This situation is exacerbated by the fact that the target year set for its completion is just round the corner. According to a latest report by global analytics firm Credit Rating Information Services of India Limited (CRISIL), India would be able to manage only 60 GW capacity by 2022. The turn of events may have triggered a spike in costs thanks to the anti-dumping duty on imported solar panels that are currently widely used in our country.

The prospect of India not being able to meet its 2022 commitments of installing 100 GW of solar power is a cause of serious concern considering the fact that the country is being egged by the international community to scale down its carbon footprint and green house gas emissions arising out of fossil fuel usage.

The report further states that India crossed 25 GW of installed capacity during the end of December 2018 and may only be able to add another 44 to 46 GW in the next five years. The slowdown is yet another pointer as to why India needs to get its renewable energy strategy in order.

One of the reasons for the solar slowdown is an anti-dumping measure imposed in July 2018, called the safeguard tax on imported solar cells, which are widely used all across the country. This tax was 25 per cent for the first year, 20 per cent for the next six months and 15 per cent for the following six months. The tax was imposed as a safeguard measure for the domestic solar module industry, which is unable to sell panels due to lower priced imports from China and Malaysia.

The interesting part, however, is how the Government and expert committees could not predict the consequence of such duties on the domestic renewable energy sector. It is developments such as these that are leading to the renewable sector in India moving one step forward and two steps backward.

But the anti-dumping duty should be of least concern for the renewable energy industry amid talks doing the rounds about the stalling of a comprehensive strategy. This is plaguing this sector. Renewable energy, undoubtedly, is the future, but the question is: How will this country achieve the target? This is where ambiguity comes in. As energy production gets ramped up with solar technology, the role of distribution companies might be impacted and the current strategy does not have any specific clarity regarding the same. In addition to this, as the transition takes place, the country needs to give a proper thought about the coal geography, existing coal stocks and those who will be directly affected. Since the projected domestic social costs of power generation from coal by 2024-25 will be too high, there would be of no use in building new coal power plants.

Earlier, there were many plans to build more coal power plants but that bubble has burst. The Government needs to take policy decision to replace fossil fuel, especially coal with renewable energy installations. But this needs to get decisively reflected in the renewable energy strategy of India.

The urgency of a plan that on the one hand allows for a conducive solar energy growth and at the same time scales down the fossil fuel powered energy sources is very important. In addition to this, there is also the criticality of ensuring that an effective equilibrium is maintained between imported products, technology and domestic industry products.

An effective combination of the above will ensure that renewable energy targets are met on a timely manner. Then there is also a pertinent need to increase the daily use applicability of solar technology, which in turn will promote usage and indirectly push production. The Government must also focus on increasing awareness levels, bring solar energy technology and usage closer to the common man. In order to ensure this, stress must be put on plug and play systems that are based on solar energy technology. These systems must also clearly spell out a cost benefit analysis over conventional non-renewable energy sources. A combination of a comprehensive future proof solar strategy that accounts for scaling down of fossil fuel usage along with increasing common man awareness will alone prevent the slowdown of solar energy progress in India.

(The author is an environmental journalist)