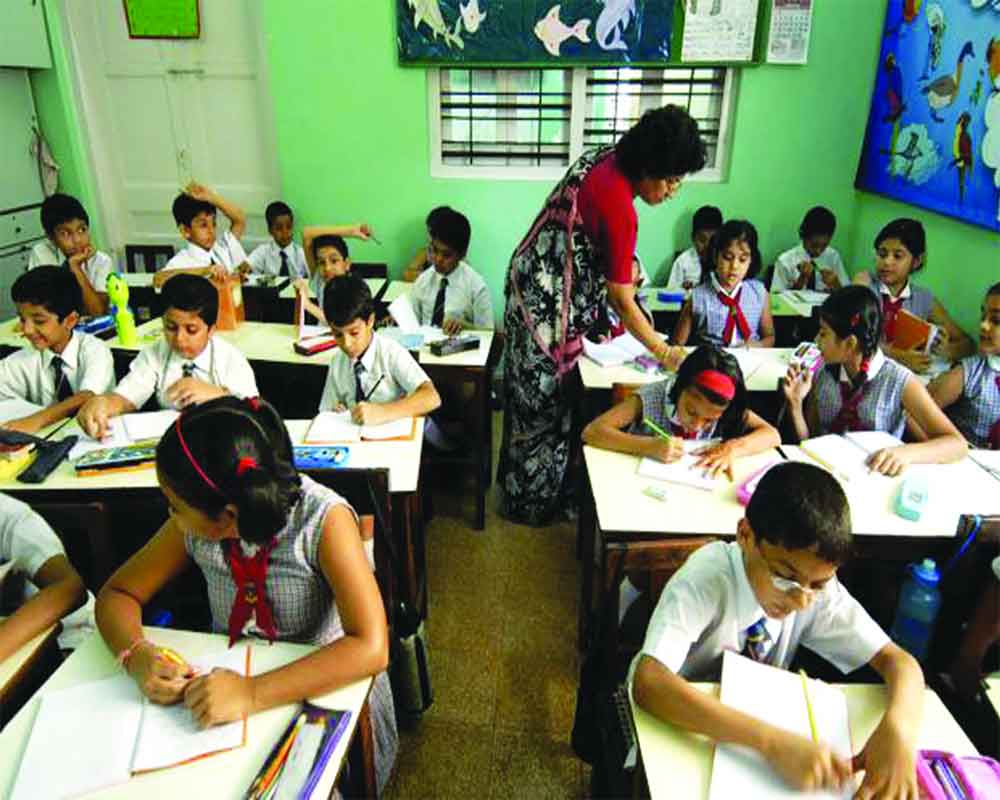 Learning does not just mean textbooks, transaction and evaluation. It has to also achieve an attitudinal transformation, needed to ensure the very survival of humanity

A couple of decades ago, during an international conference on education and teachers’ development, a much-admired and sought-after speaker summarised learning, its transfer, acquisition of knowledge and its utilisation in four simple queries: Who to teach; whom to teach; what to teach and how to teach. As a new entrant in the area of teaching, switching over from research to teaching Physics, I was listening with rapt attention to every word uttered by the speaker. I recalled how all those, who were attempting to extend and expand education to one and all in the early 50s and 60s, had to regularly respond to a serious question: Why should I teach my children? The most serious question, however, was: What purpose will it serve if we send our girls to schools? The toughest poser from several communities before educators in the mid-20th century was: Why educate? Recalling such experiences, I asked the speaker whether his articulation would appear more comprehensive if “why to teach” could also be included. To my surprise, the speaker and others agreed with me and included it.  Most participants from developing nations had similar experiences that a large number of people were reluctant to send their wards to schools. Human traits of curiosity, exploration and creativity have suffered invasions of ignorance but have continuously scaled greater heights in exploring the secrets of nature.

Education is a process that organises, synthesises and harmonises such human endeavours and infuses the requite dynamism to enhance the process of civilisational advancement. Knowledge quest remains an eternal human pursuit. As human beings advance ahead in their comprehension of the secrets of nature, new avenues and challenges emerge before them and that requires reshaping of education policies. India is already in the process of doing so. But education policies must be based on sound epistemological base and articulated in the idiom of the day. The deliberations of the conference mentioned above were attempting the same: Know the learner, study, analyse and envision needs; evolve the right and appropriate pedagogy; practice the transaction strategies and prepare the learner to face life and above all, add to the acquired knowledge and put it to the right use. Teachers, researchers and all those engaged in the process of transfer and creation of new knowledge and skills are categorised as knowledge workers in current parlance.  This tells us that we all are living in a “knowledge society that concentrates on knowledge economy.” Policies must remain conscious of this responsibility to prepare knowledge workers.

We acquire and continue to receive more knowledge; we transmit it to the new generation and expect them to excel us; we expect the younger lot to contribute to knowledge creation and its utilisation. There are two basic premises that characterise the Indian tradition of knowledge quest: Yavadjeevait adhiyate viprah — the wise continue to learn throughout life — and sarva bhuta hite ratah — strive for the welfare of one and all. The Quran directs to acquire knowledge even if one has to travel to China — face arduous roughness and toughness. Ilm (knowledge), I am told, is the second most used term in the holy book after the “Lord.” Indian civilisation has given the highest respect to gyan (knowledge) and the guru, the giver of gyan who leads an individual learner and takes him/her into the realm of the unknown to unravel secrets of the universe and beyond — from the darkness of ignorance to the light of knowledge.

Nothing, it is said, is accepted by a thinking, analytical and critical mind without adequate scrutiny; posing queries; and searching for answers. It applies to knowledge, too. Here, I am reminded of a quote by Bertrand Russell: “Man has no chance of survival if knowledge remains only knowledge. But if we could transform knowledge into wisdom, one would not only survive but would be able to ascend to greater and greater heights of achievements.” In fact, Russell is making the distinction between gyan and vivek (discretion). He emphasised on the power of ideas and imagination when he said: “The reasonable man expects to conform to society. The unreasonable man expects society to conform to him. Therefore, all progress depends on the unreasonable man.”

To illustrate why Russell is correct, I will cite an example. Think of Hiroshima and Nagasaki and what happened there. Modern scientific knowledge was at its highest peak — human beings could prepare an atom bomb, a great scientific and technological achievement. Those involved were the most brilliant of minds on earth, admired for their unparalleled dedication and devotion to their profession. They were distinguished scientists, academics, scholars, explorers and innovators. There was no suffocating hierarchy between them, they respected each other and mind power ruled there, in Los Alamos. They were linked to their peers elsewhere, with riders, of course. They were, however, expected to hurry up as the enemy elsewhere was also keen to reach the same destination — both wanted an atom bomb before the other. Scientists were assigned to prepare the bomb but its use and misuse wrested with political power wielders. Knowledge was there, its possible usage in human welfare was clear before scientists.  Even the general public was aware of it. Decision-makers did not use wisdom — buddhi (wisdom) and vivek — and shamed humanity by bombing Hiroshima and Nagasaki.

Clearly, education does not just mean textbooks, transaction and evaluation but much more. It has to achieve an attitudinal transformation, needed to ensure the very survival of humanity. When Swami Vivekananda said that education without character building is meaningless, he was only expressing how it is imperative on part of education systems and policies to ensure “man-making education.” This is what India’s new education policy must aim at. It must attempt to articulate how to move ahead towards that goal.

Education is very rightly termed as “a necessary utopia.” There can be no limit to expectations from education, educational systems and educated human beings. At the current juncture of human civilisation, characterised by the “pace of change”, the guiding factor must be nurturing and nourishing intellectual vitality. Educational institutions, right from initial stages, must realise their responsibility to offer free passage to curiosity, creativity, natural flight of ideas and imagination.

Unfortunately, our systems have become so prescriptive and restrictive that all these four factors are impeded at every stage, rather everyday. Our system is characterised by debilitating school bags, innumerable textbooks and a series of weekly tests, board examinations with total focus on marks. Policy-makers usually work around these aspects, suggest some half-hearted changes and are often bogged down by the system to suggest only such changes that they consider pragmatic and practical. In such a process, there is little scope to encourage, inspire and nurture the faculties of imagining, thinking, reasoning, expressing, creating, inventing and postulating.  We all know how these are systematically impeded, often beyond repairs. A nation actively engaged in inclusive growth and development cannot allow the erosion of its cognitive capital. The visionary in Vivekananda had exhorted us to realise that “education is a manifestation of perfection already in man”, which clearly indicated that every individual could be nurtured to discover the “treasure within” and unearth as much as  possible out of inexhaustible treasure. His prescription was: “The brain and muscles must develop simultaneously. Iron nerves and intelligent brain — and the whole world is at your feet.”

Over the last seven decades, we have moved ahead only in bits and pieces in bringing quality educational reforms. Now that elementary education has practically been universalised, at least in enrollment and participation, we must focus on transforming every learner “from a person to a personality.” That could also be comprehended in terms of the famous Gandhian articulation of “bringing the best out of body, mind and spirit.” Once all the three get the proper environment to flourish and the interest of the child watched precisely, the right direction could be delineated on the path of vitality, including self-assurance and confidence.

Yes, teachers would have to accept what Sri Aurobindo had taught us: That nothing can be taught and that mind must be consulted in its development. Once education puts the learner on the path of his/her own liking and special interest, it would be possible to expect, in the words of Vivekananda: “The whole gist of this teaching is that you should work like a master and not like a slave; work incessantly but do not do a slave’s work...work through freedom; work through love. That is what education must achieve: Every learner internalises the values of truth, peace, non-violence, righteous conduct and love.