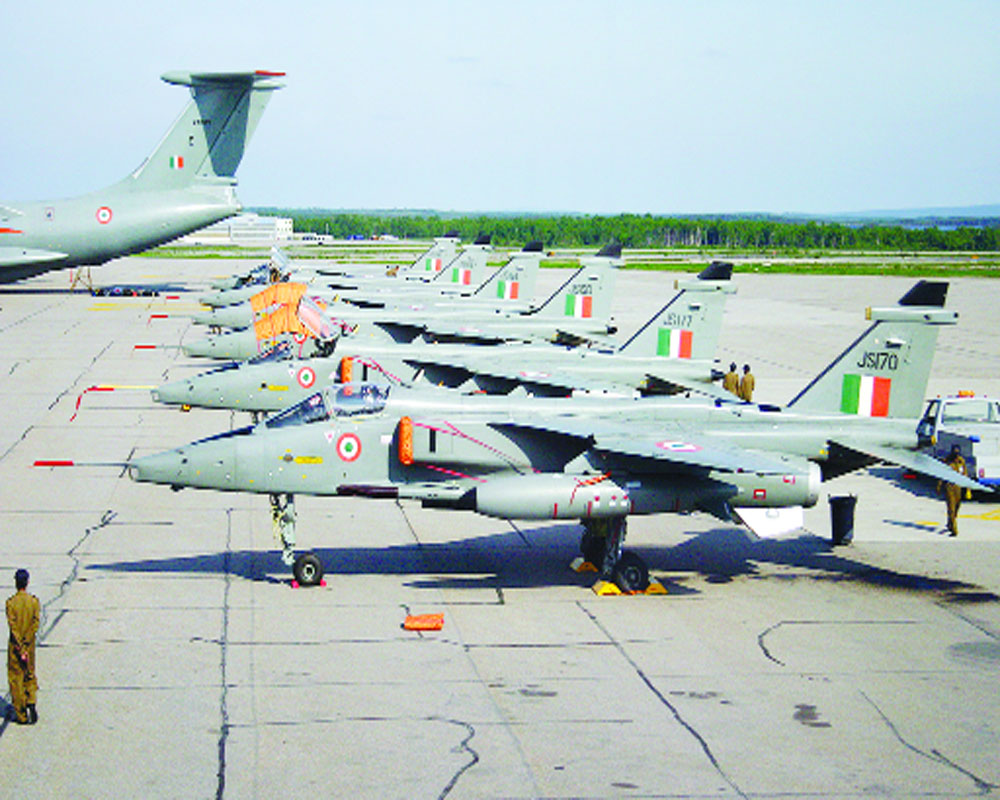 Defence Minister Rajnath Singh has his task cut out. Major challenges include modernisation of the three services besides increasing their squadron strength

One of the biggest challenges that Defence Minister Rajnath Singh is faced with is the Indian Air Force’s (IAF) depleting war machinery — aircraft/fighters. The depletion of fighters has indeed been a worrisome trend as the IAF squadrons’ strength is down to 32 from the 42 minimum required for a two-front scenario. The situation of transport aircraft, too, is no better because age-old aircraft  have been meeting with accidents and replacements are not coming through fast because of resource crunch and bureaucratic hurdles.

The IAF recently lost its fifth Russian-origin Antonov AN-32 military transport aircraft launched in 1984. The twin-engine plane went missing on June 3 after taking off from Jorhat in Assam with 13 Air Force personnel on board. It was flying to an Advanced Landing Ground (ALG) in Menchuka, Arunachal Pradesh, near the Chinese border. Strangely, on three occasions, including this time, the aircraft has disappeared without any trace.

A search-and-rescue (SAR) operation launched has been pressed into service for an aerial and ground search — two Sukhoi Su-30 multirole fighter aircraft, a C-130J, AN-32, two Mi-17 helicopters and one Advance Light Helicopter (ALH) — have been carrying out sorties in the areas around Siang district. A P8i long-range reconnaissance aircraft of the Indian Navy took off from Tamil Nadu to join the search operations. Indian Space Research Organisation’s (ISRO) CARTOSAT and RISAT satellites are taking images of the area. Ground parties of the Army and the Indo-Tibetan Border Police (ITBP) as well as locals and district administration officials are also searching the area. However, no wreckage has been sighted so far.

The AN-32s have a spotty safety record. The plane and its variants have been involved in more than 15 incidents since 1986, according to the Aviation Safety Network. In 1986, an AN-32 disappeared over the Arabian Sea on a delivery flight from the Soviet Union via Oman. No trace was found of the aircraft or the people on board. In 2016, another AN-32 having 29 personnel flying from Chennai to the Andaman and Nicobar Islands went missing above the Bay of Bengal. In between these two incidents, there were two crashes — in 1989 and 2009 — that resulted in the deaths of the 13 crewmembers.

The IAF has over 100 AN-32s, which play a critical role in equipping India’s frontline forces. The IAF supplies nearly 40,000 tonnes of material, including food and kerosene, every year to far-off places. People believe that transport aircraft is only for carrying passengers but that isn’t its only role — the AN-32 has done a fantastic job for the Air Force and the country. Almost 15 years back, it was used to transport Meat on the Hoof, including sheep and lambs to Ladakh, Siachen and Arunachal bases. It hasn’t just been called a workhorse.

The Ukrainian manufacturer of the AN-32 transport aircraft, Antonov Aeronautical Scientific/Technical Complex, had been awarded a $400 million order to upgrade the entire AN-32 fleet. The AN-32s were fast approaching the end of their “total technical life” of 25 years by the end of 2019,  which prompted the Ministry of Defence to issue one of its largest upgrade contract till date. Under the contract, an estimated 100 AN-32s will get an upgrade and life extension overhaul over a period of five years, with an initial lot being sent to Ukraine and the rest undergoing it at Kanpur depot of Hindustan Aeronautics Limited (HAL). The project was executed in 2009-2013. It will include life extension of both the engines and airframe, improved avionics suite, communication equipment and landing aids”. Surprisingly, the upgrade did not include the engines or the air-frame.

The twin-turboprop AN-32s, which ferry troops and supplies to forward areas, has suffered from poor serviceability, tardy maintenance, delays in overhauls and shortage of spares, resulting in a high Aircraft On Ground (AOG) percentage.

Unfortunately, this non-upgraded aircraft was operating in such a hostile and rugged terrain. As a result,  there could be no significant life extension. Yet the fact, as recorded in a Comptroller and Auditor-General of India (CAG) report tabled in 2015, is that the upgrade programmes “was neither completely successful nor comprehensive”. Defence Minister Rajnath must ensure that some heads fall for such a serious lapse.

Of the 28 IAF fighters crashed between April 2012 and March 2016, more than one-fourth (eight) involved the MiG-21, six of which were the upgraded MiG-21 Bison variant, the Government told the Parliament in March 2016. From 1971 to April 2012 as many as 482 MiG aircraft accidents took place, killing 171 pilots, 39 civilians, eight service personnel and one aircrew, the Government told the Parliament in May 2012.

From 1993 to 2013, 198 MiG-21s specifically — often dubbed “flying coffins” by pilots — of different variants have crashed, killing 151 pilots. By 2022, these aircraft will have reached the end of their lifetime and the MiG-21s along with the MiG-23 and MiG-27 will be phased out. To overcome its depleting fighter strength, the IAF will have to acquire the aircraft as soon as possible. Over 10 squadrons of MiG-21 Bisons and MiG-27 Floggers will be retiring by the end of 2019.

To hold up against today’s fighter-jets, an aircraft needs the latest technology such as advanced avionics and radar, greater weapon-load capacity, stealth technology, electronic warfare capability, precision weaponry and other such features, which the MiG-21 does not have. To arrest the drawdown, the Air Force will induct Sukhoi-20, Tejas Light Combat Aircraft (LCA) and Rafale jets, the IAF told the parliamentary committee.

In April 2018, Prime Minister Narendra Modi, side-stepping a three-year negotiation for the Medium Multi-Role Combat Aircraft (MRCA) competition, also known as the MRCA tender to supply 126 multi-role combat aircraft to the IAF tender, announced the purchase of 36 Rafale fighter aircraft after a deal struck directly with the French Government. While the acquisition of 36 Rafale, which will be delivered during the time frame 2019-23, will ameliorate the situation somewhat, the squadron strength will still be alarmingly worrisome.

There is indeed a dire need for a spirit of inquiry in a country where year after year an ever-increasing Defence Budget (Rs 418,000 crore for the FY 2019-2020) gets passed in the Parliament without any discussion or debate, even as India’s security challenges continue to mount. Yet, despite this huge allocation, the capital outlay remains both inadequate and sometimes even under-spent due to bureaucratic interference.

The depletion of IAF squadrons is a matter of great concern. How can a nation afford to lose highly trained brave lives (IAF pilots) and billions of dollars war equipment besides plummeting combat efficiency? Rajnath Singh has to also uproot this lackadaisical attitude of bureaucracy by integrating military leadership in MoD. Now that the fresh Budget will be presented in the Parliament in July, the Defence Minister must raise the meagre Defence Budget on the whole and ensure immediate measures to build up around 10 deficient fighter squadrons for improving IAF’s combat efficiency.

(The writer is a retired Professor in international trade)