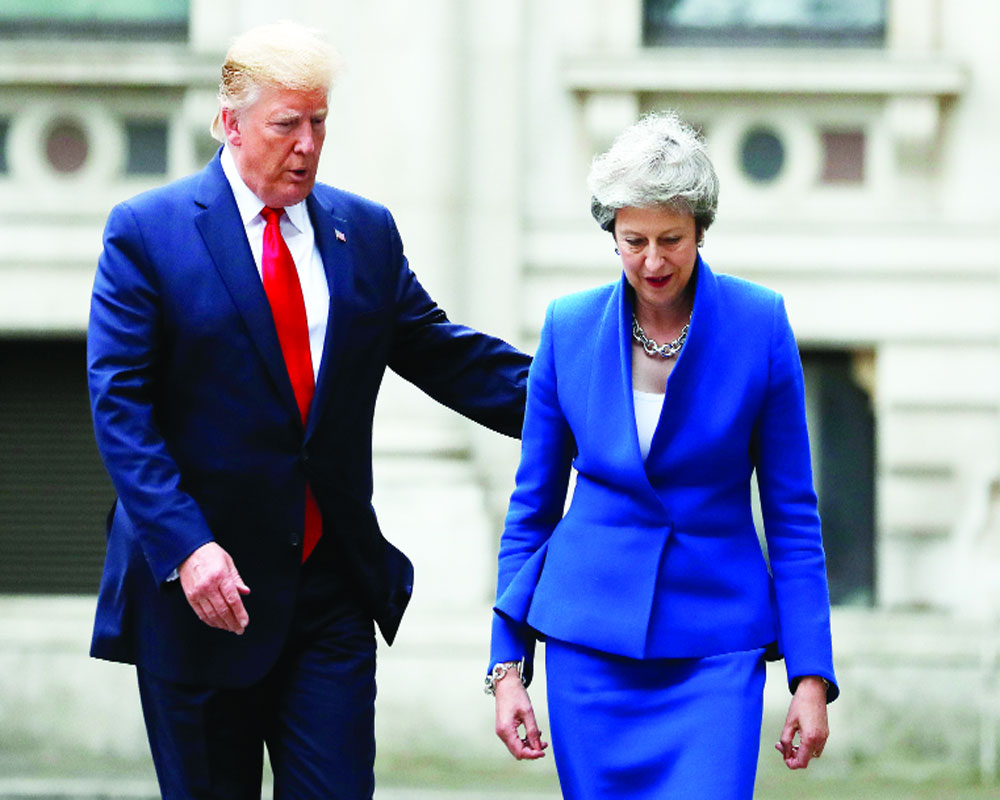 The ‘special relationship’ between the UK and the US is elusive. Trump’s visit to Britain nailed the optics of an empire that was wilting under the weight of an ‘unequal’ relation

Romance and nostalgia surrounding the grandeur of the British empire in the 19th and 20th century is predicated on “the empire on which the sun never sets.” This pomposity was extended to include emerging America in the mid-19th century to posit the Anglophone domain, as noted by Alexander Campbell in 1852, “To Britain and America, god has granted the possession of the new world; and because the sun never sets upon our religion, our language and our arts…” Subsequently, the two world wars of the 20th century changed the global narrative and the churn of history left the British empire to hold on and cast its equation with the US in a Churchellian expression, “special relationship.” Befittingly, British Prime Minister Theresa May sought “a new special relationship”, while not one to be left out, US President Donald Trump added his own to the lexicon by claiming the bilateral relationship to be, “the highest level of special!” However, the stark reality of the two nations clutching the straws of history was inevitable as Trump made his state visit to the UK as May was in the last week of her notice period.

The usual blusters, clichés and gaffes notwithstanding, the visit nailed the optics of an empire that was wilting under the weight of an “unequal” relationship that besets any relationship with the US President Donald Trump. The quintessential English “correctness” of May helped her mumble over the contentious issues between the two nations, namely, on how to handle Iran, China or even Brexit. Even the ostensibly “nasty” past of the once-American and now the Duchess of Sussex, Meghan Markle, was providentially avoided as she was on maternity leave. Yet, the cracks in the sovereign outlook and intrusions into the domestic affairs of the UK by Trump, had all the hallmarks of a very “Un-English” inelegance and mannerism. From opining on members of the royal family, the mayor of London, Opposition leaders, Brexit negotiations, to even his own preferences for the next incumbent of the 10 Downing Street — Great Britain was made to look rather pedestrian and beholden to its “special” ally.

Undercurrents of suspicion across the Atlantic have simmered for long and even the victory in World War II was marred with private concerns in the UK, over the ruthless negotiations done by the US, to extend crucial support during the war to its “special” ally. Beyond the exacting commercial terms enforced on the post-war UK, the US denied support to its “special” ally on Suez Canal, leading to its humiliating retreat. In 1983, the US invaded Grenada in the Caribbean, then supposedly a member of the British Commonwealth. Even the reciprocal disinterest in both the Vietnam war and later, the Falklands, owing to their individual compulsions militated against the publically postured alliance. The US Secretary of State during the Vietnam War, Dean Rusk, had famously told a British journalist on the cold feet developed by the British Government in contributing military wherewithal: “When the Russians invade Sussex, don’t expect us to come and help you.” Deep in the psyche of the Trans-Atlantic world, only the fear of the “others” in the Cold War era kept the portents of “special relationship” going — but the writing was always on the wall, and with the advent of the businessman-turned-President,   the worms came out of the woodwork.

Serendipitously, a 2003 British comedy film, Love Actually, has a role played by Hugh Grant as the Prime Minister of Great Britain, who stands up to the roughshod antics of the visiting US President. In it, the British Prime Minister calls the bluff on the “special relationship” by saying on the podium with the US President by his side, “I love that word relationship. Covers all manners of sins, doesn’t it? I fear that this has become a bad relationship. One that is based on the President taking exactly what he wants and casually ignoring all those things that really matter to Britain. We may be a small country, but we’re a great one too” and then adds for good measure, “A friend who bullies us is no longer a friend. And since bullies only respond to strength, from now onward, I will be prepared to be much stronger. And the President should be prepared for that.”

Unfortunately, in 2019, none of that happened and May stood meekly by the side of the US President as he railed against the Mayor of London, Sadiq Khan, by calling him a “not good mayor who had done a poor job.” He then added, condescendingly and lordly, that the mayor had criticised the “representative of the US that can do so much good for the UK.” Further, with the British Prime Minister acquiescing, Trump went on to call the head of the Opposition party, Jeremy Corbyn, a “negative force.” Completing the picture of servility was the final comments by May, addressed to both the Mayor of London and Corbyn, about the “greatest alliance” that “ensures our safety and security and the safety and security of others around the world, too.” That May was no Winston Churchill or even Margaret Thatcher was all too clear and visible.

Trump merrily waded into the bitterly divided waters of Brexit with his own opinions on its (mis)handling, while making the protocol exception to meet the divisive figure of Nigel Farage at the US Ambassador’s residence. He reiterated Brexit “will happen and it probably should happen”. A hapless empire was left with a visiting US President telling them about his personal preferences for the next Prime Minister in Boris Johnson or Jeremy Hunt.

Clearly, the days when a blunt Margaret Thatcher could stand up to the Yankee Republican President, like Ronald Reagan, who while urging her to go slow on Falklands, was told off chillingly by the ‘Iron Lady’: “I didn’t lose some of my best ships and some of my finest lives to leave quietly.” Since then, the sun has indeed firmly set on the empire’s “greatest alliance.”