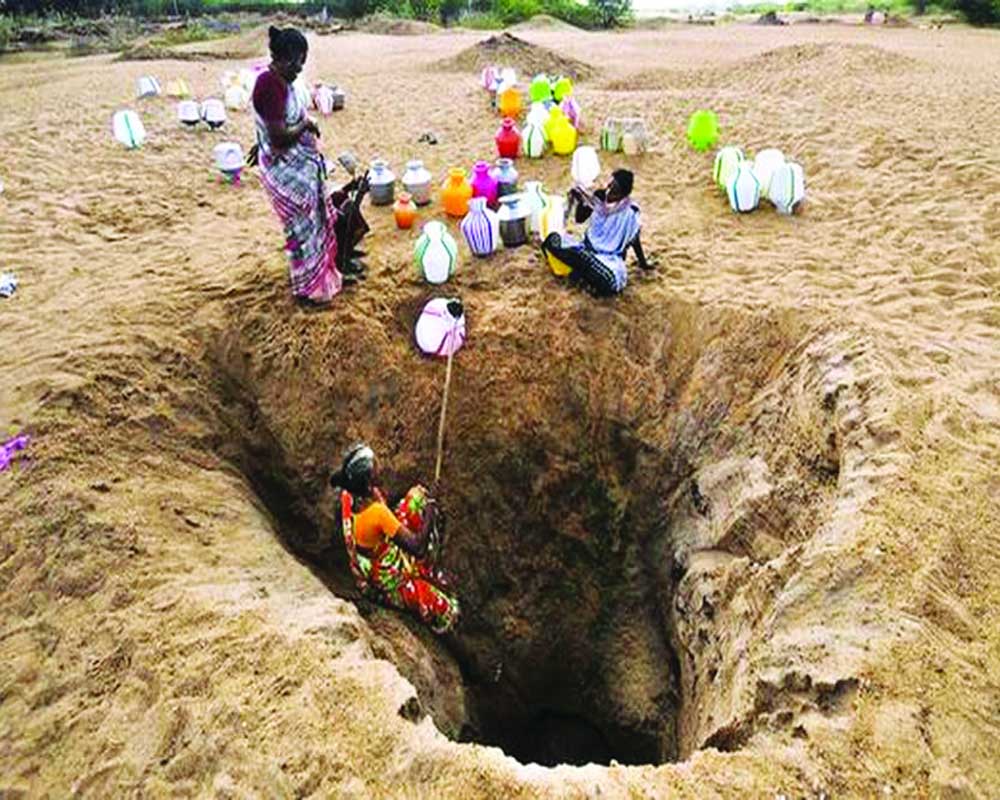 India’s relatively wet climate offers hope even in today’s dire situation. What is needed is the enforcement of programmes aimed at conserving our most precious resource

Water, water everywhere/ Nor any drop to drink.” These words, from an evocative poem by the famous 18th century English poet, Samuel Coleridge, echo the helplessness of a harried sailor, his ship stranded in the middle of the sea but with no water to drink as all supplies on it have been exhausted. The sailor’s desperate cry, uttered over 300 years ago, seems to ring an ominous bell in India today as the country battles extreme water scarcity in several regions alongside extensive flooding in many others. This ironical situation is the result of prolonged water mismanagement, leading to depleted groundwater levels, coupled with a waxing and waning monsoon.

The change in monsoon patterns across the country has been causing significant rain deficit in Uttar Pradesh, Chhattisgarh, Rajasthan, Maharashtra and Delhi over the last decade as compared to historical rainfall averages. In other States like Assam, Bihar and Kerala, floods caused by an aggressive monsoon are leaving behind a trail of death and destruction. The first casualty of the disruption in rainfall is agriculture as an estimated 49 per cent of India’s farms depend solely on rain for irrigation. According to the Economic Survey 2017-18, farmers without access to irrigation lose nearly 14 per cent of their income because of rainfall shocks. And among those, who are able to irrigate their fields, 62 per cent rely exclusively on groundwater. Since groundwater is replenished only through rain seeping into the ground, the vagaries of the monsoon lead to a vicious cycle of drought-ridden fields and rapidly depleting aquifers across the country, with the depth of access to groundwater plunging from 7.5 m in 1998 to 9.2 m in 2018.

A 2012 World Bank report on groundwater exploitation in India asserted that the country recorded the highest dependence on water from aquifers globally. While 90 per cent of this groundwater is used for irrigation, the remainder is used to supply drinking water. Highlighting over-exploitation of 29 per cent of groundwater blocks, the report predicted a 60 per cent rise in this figure in 20 years, with serious implications for agricultural sustainability, food security and economic growth.

However, the crisis is almost upon us much before the World Bank’s deadline. In June 2018, the NITI Aayog had predicted that the demand for potable water would completely outstrip supply by 2030 in the absence of any urgent action. Even more alarmingly, 21 cities, including Delhi, Bengaluru, Chennai and Hyderabad,would run out of groundwater as early as 2020, affecting 100 million people and leading to an estimated six per cent loss in GDP by 2050.

Another complication is the impact of excessive groundwater extraction on water quality as water collected from deeper underground is more likely to be contaminated with harmful chemicals like arsenic, nitrate and fluoride. An even graver food crisis looms on the horizon because when irrigation wells go dry, farmers use untreated wastewater laced with industrial chemicals and human sewage for watering their food crops, which eventually find their way into our kitchens. It is obvious that India is sitting on a potential “water” bomb threatening public health by unleashing a spectre of diseases among its over-populated and under-resourced habitations.

How did India, venerated as a land of rivers and holy waters since primordial times, achieve this disconcerting status of a nation riddled with water deficiency and toxicity? “After 1990, cities in India have grown rapidly but without considering where the resources are coming from”, says Samrat Basak, Director of the World Resource Institution (WRI) India’s Urban Water Programme. Reflecting on the social impact of the water crisis, VK Madhavan, Chief Executive of the non-profit WaterAid India, contends that soon young girls, especially in rural areas, might start dropping out of school en masse to help their families fetch water from increasingly remote water access points. This warning is corroborated by data from the India Human Development Survey (IHDS), a nationally representative survey covering 41,554 households in 1,503 villages and 971 urban neighbourhoods across India, jointly conducted by the National Council of Applied Economic Research (NCAER) and University of Maryland, the US, in 2004-05 and 2011-12. IHDS found that only 44 per cent households had access to piped water, with the figure going up by merely four per cent between 2004 and 2012. The IHDS findings also show a substantial decline in the duration of water availability — from 5.3 per cent in 2003-04 to 3.8 per cent in 2011-12 — for households with piped water in metro cities. Consequently, households without indoor water sources spend precious time collecting water at an average of 80 minutes per day, extending to even three hours for about 10 per cent of these households. How will the economy counter this time burden and huge opportunity cost?

Compelled to take cognisance of the water crisis, the Government decided to prioritise water management in the latest Union Budget, to ensure provision of potable water throughout the country by 2024 under the proposed “Har Ghar Jal” scheme. Union Finance Minister Nirmala Sitharaman also announced the formation of a new Ministry, the Jal Shakti Ministry, by merging the Ministries of Drinking Water and Water Resources and River Development and Ganga Rejuvenation for overseeing all water-related issues. The Government has identified 1,592 blocks in 256 districts facing acute water scarcity and over-exploitation of groundwater as prospective locations for rainwater harvesting and water conservation in the first phase.

Other initiatives, including renovation and re-use of traditional water bodies and watershed development, are slated for the next phase. The Union Budget 2019-20 also allocated Rs 9,150.36 crore for the National Rural Drinking Water Programme, marking a massive increase of 69 per cent over the allocation of Rs 5,391.32 crore in 2018-19.

Water conservationists and experts are, however, not impressed, dismissing the Budget provisions as a “pipe dream”. Raman VR, Head of Policy at the NGO WaterAidIndia, posits that in 2017, the Ministry of Drinking Water and Sanitation itself estimated the need for Rs 500,000 crore for providing piped drinking water to all households. Even if States contribute half this amount, the annual requirement till 2024 would be over Rs 60,000 crore, to cover hardware, human resources, infrastructural, operations and maintenance costs. Where will these funds come from?

“There is no evidence to suggest that merely enhanced spending will increase both water supply and the net area under irrigation,” says Dr Biksham Gujja, former head of water policy at WWF-International and founder of AgSri, a private organisation promoting sustainable agriculture and water resources management. He argues that the Jal Shakti Ministry should instead focus on developing tools and technology for efficient hydrological management.

On an optimistic note, India’s relatively wet climate, even in the most arid regions, offers hope even in today’s dire situation. What is needed is efficient and wider implementation of programmes for rainwater harvesting, development of water storage bodies like ponds and reservoirs, promotion of water re-use and recycling and better filtration techniques for de-contaminating potable water, across the country. And these solutions need to be enforced now — the time for long-term planning has run out!

Coleridge’s hapless mariner survived the challenges at sea, presumably finding clean water at the end of his ordeal. But will the rising tide of India’s population be equally fortunate?

(The writer is Editor at the National Council of Applied Economic Research. Views expressed are personal)