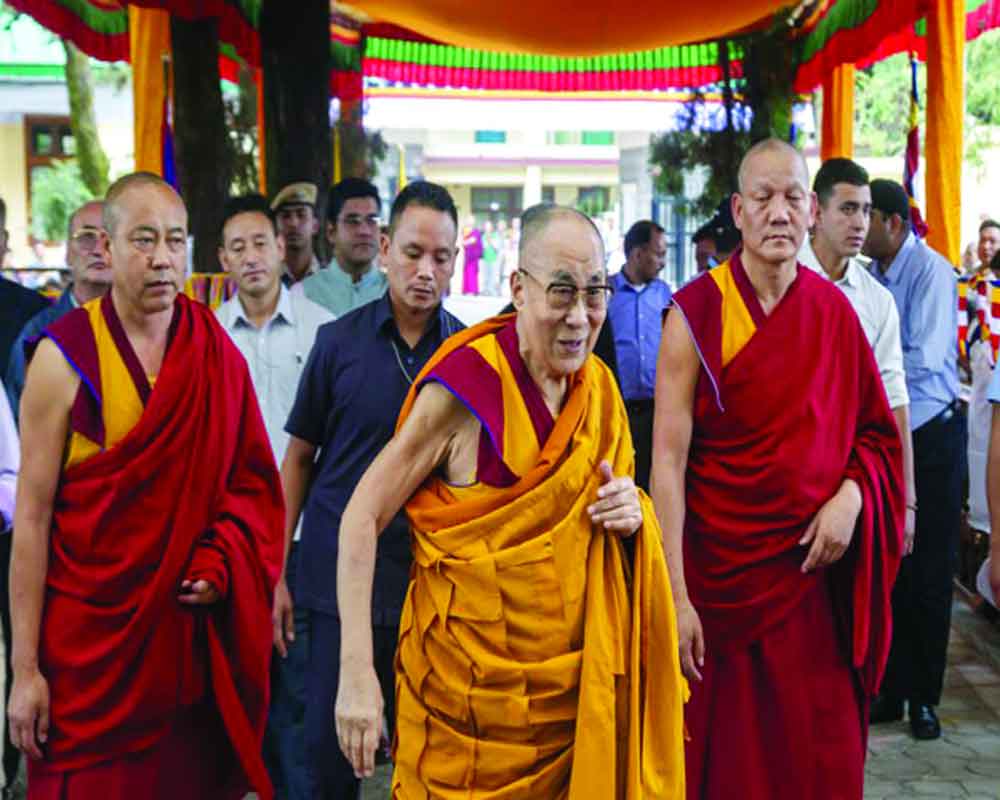 The Lama had made it clear in 2011 that he shall leave clear instructions about who should succeed him. This should clear doubts and cut out the Chinese propaganda

China has mastered the art of information warfare. We saw it during the Doklam episode. Though caught on the wrong foot on the ridge at the border of Sikkim and Bhutan, the Chinese spokespersons managed to convince many Indian scribes of the validity of a defunct 1890 Convention between the Manchus and British India. More recently, the Dalai Lama was the victim of  Chinese propaganda. For the purpose, Beijing used some Indian journalists, “inviting” them to Tibet for a trip to “see the facts” for themselves.

On their return, one of the correspondents, quoting the Chinese authorities, wrote: “The successor of the Dalai Lama has to be decided within China and any interference by India on the issue will impact bilateral ties.”

The message that Beijing wanted to pass was faithfully reported by the gullible Indian scribe, who quoted one Wang Neng Sheng, Director General (of Propaganda) in the Tibet Autonomous Region’s administration: “The current Dalai Lama was recognised by Beijing and his successor must be found through the ‘draw of lots in golden urn process’ within China. The Dalai Lama’s reincarnation is not decided by his personal wish or by some group of people living in other countries.”The ignorant Wang was probably unaware that no golden urn was used for the selection of the present Lama but propaganda does not need to stick to facts.

Another official, Zha Luo, director of the China Tibetology Research Centre in Beijing, confirmed that “any refusal by India to recognise the next Dalai Lama to be chosen within China will impact bilateral ties.” In other words, if Delhi does not kowtow to Beijing’s choice, there will be “consequences.”

It was enough to provoke a flurry of reactions from Dharamsala, the headquarters of the Central Tibetan Administration and from elsewhere in India. A Tibetan official, Tsewang Gyalpo Arya, stated: “The Chinese officials pointed out two things as important historical criteria for the selection of the Lama’s reincarnation. First, the selection should be within China based on the 200-year-old historical process. Second, it should have the approval of the Chinese Central Government.”

Arya argued that the Golden Urn procedure and the approval of the Chinese Central Government were not mandatory for the recognition of a Lama: “It is an aggressive and ignominious attempt on the part of the Chinese leadership to distort the ancient religious tradition of Tibet to serve its current political agenda.”

The problem is that the sometimes mischievous Dalai Lama has in the past given “controversial” statements to the Press. One that made headlines recently was to Rajini Vaidynathan, a BBC journalist, who was obviously more interested by her audience rating than by a deeper understanding of a complicated question.

When Vaidyanathan asked the Tibetan leader about “returning” as a female, the Dalai Lama said with his characteristic humour that his successor could be a woman, but she ought to be “attractive.” Vaidyanathan used her Twitter account to spread excerpts of the “controversial” video in the social media; the Tibetan leader had to sadly apologise for his “misogynist” remarks.

I remember asking him this question about a female Dalai Lama more than 15 years ago; he had smiled and explained that it was possible, there was no bar on this in Tibetan Buddhism. He had added that if it was useful for the Buddha Dharma and the Tibetan cause, “why not?” The issue remains that his office should be aware that the world has changed and today, rogue journalists are only interested in sensationalism.

In any case, Chinese propaganda and “modern” journalism do not help clarify the complicated issue. The succession is indeed a serious affair, not only for China, which has been working hard to prepare a post Dalai Lama scenario with a few pliable Tibetan Lamas presently living in Tibet, but is also crucial for the Tibetans (in exile and in Tibet) and India as well.

The succession process could go two-ways. First a “traditional” reincarnation with the huge problem of having a child and later a teenager for two decades at the helm. The other solution would be an “emanation.” The latter system is favoured by many as it would bring some stability in the system (and disarm the Chinese ‘religious fervour’); it practically means that the Dalai Lama would “emanate” in a young boy and groom him as his successor.

Though the Indian Government would probably not interfere, it still has vital stakes in the outcome (particularly in relation to the Himalayan populations from Ladakh to Arunachal Pradesh). After the BBC incident, the Dalai Lama declared: “One day you will hear that the Dalai Lama has passed away, but I will come back, even if the institution of Dalai Lama is no longer recognised. I will be back.”

That is the real question: Will Tenzin Gyatso come back as a Dalai Lama? In another statement to The Week, he said that the rule-by-reincarnation system is feudal and may be discontinued. The result of all these declarations is that the Chinese are confused, but for them to bank on their own Dalai Lama may be risky.

They should also remember the case of the Tenth Panchen Lama, who in May 1951 was forced on a weak Tibetan Government by China, against a candidate selected by Lhasa. From his early years, the boy was groomed by communist China as a “model Lama” but slowly over the years, he became his own man. In 1964, a few years after the Dalai Lama had taken refuge in India, in a speech in Lhasa, the so-called puppet Panchen Lama told a large audience: “Long Live to His Holiness the Dalai Lama.” He was immediately arrested and only released in 1978 with the help of Xi Zhongxun …President Xi Jinping’s father.

Again in 1989, while visiting his monastery near Shigatse, he had questioned the 30-year occupation of China. A few days later, he died of a heart attack. The case of the Tenth Panchen Lama proves that China would be wrong to take a Tibetan for granted, even if he is chosen by the party.

In 2011, the Dalai Lama had clearly stated: “I shall leave clear written instructions about this.”

It is, perhaps, time that he announces that instructions about his “succession” have already been given, thus removing the doubt in everybody’s minds and cutting out the Chinese propaganda.