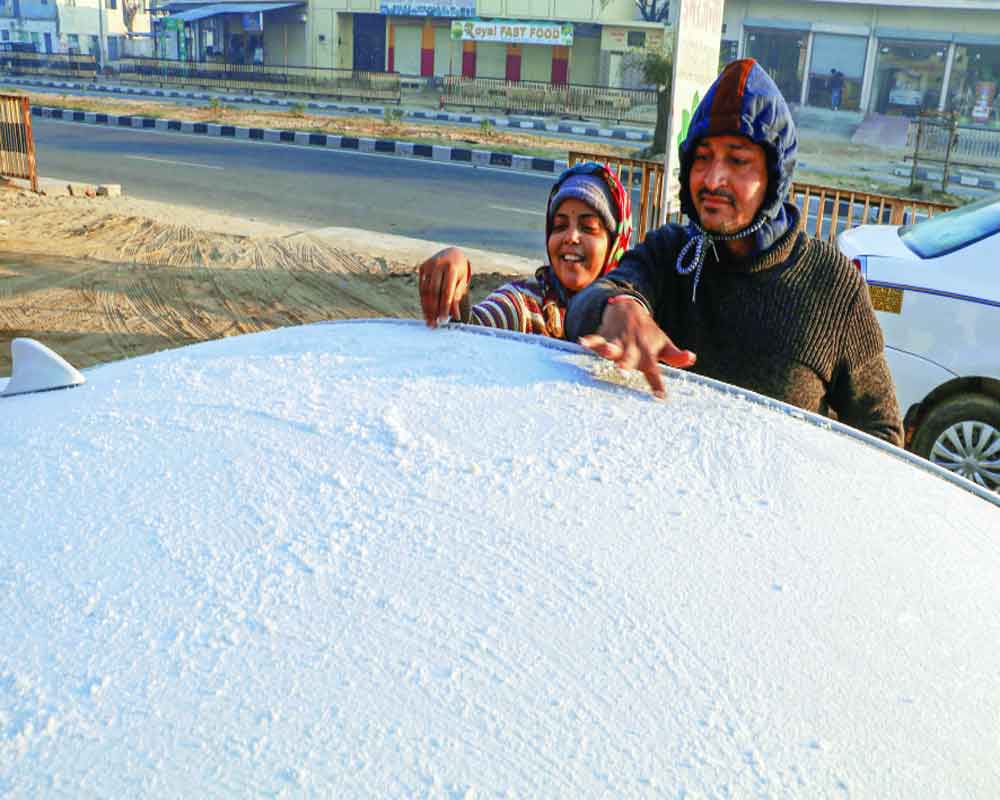 Known more for its hot weather conditions, Rajasthan is witnessing five of its cities registering sub-zero temperatures with Fatehpur in Sikar district being the coldest at minus 4 degrees Celsius as extreme cold wave conditions prevail across north India.

A waterfall in Kinnaur district in Himachal Pradesh froze completely, and so did water supply lines at several places in Srinagar, which recorded its coldest night at minus 5.8 degrees. At minus 11.2 degeres, Pahalgam in south Kashmir’s Anantnag district was the coldest recorded place in the Valley.

If Delhiites shivered, then residents in neighbouring Haryana and Punjab too as Hisar (0.2), Narnaul (0.5), Rohtak (1.8) and Bhatinda (2.3) had temperatures dipping five to seven notches below normal.

Temperatures in Leh and Drass in Ladakh plummeted to minus 19.1 degrees Celsius and minus 28.6 degrees Celsius respectively. Deaths due to cold have been reported from several places across States, though there is no official confirmation about the numbers.

In Himachal Pradesh, temperatures below the freezing point were recorded in Kufri, Manali, Solan, Bhuntar, Sundernagar, Seobagh and Kalpa. Keylong was the coldest place recording minus 11.5 degrees Celsius.

Normal life was affected in Rajasthan also due to fog. MeT officials said Sikar and Mount Abu recorded a minimum temperature of minus 1 and minus 1.5 degrees Celsius respectively, while Alwar recorded a low of 0.2 degree Celsius and Pilani 0.6 degrees Celsius.

Churu (1.1), Sriganganagar (2.1), Dabok (2.6), Bikaner (2.7) and Chittorgarh (2.8 degrees Celsius) reeled under cold wave conditions which are likely to continue in the State over the next 24 hours. The MeT department has forecast ground-frost conditions in several districts, besides a dense fog.

In Kashmir, the MeT department has forecast rain and snowfall on the New Year day that is likely to bring respite from the cold wave conditions in the valley. “There is a possibility of light rains or snowfall across Kashmir for a few days from December 31,” an official said adding fairly-widespread rainfall or snow is likely on January 2 which may continue till January 3.

Kashmir is currently under the grip of “Chillai-Kalan”, the 40-day harshest period of winter when the chances of snowfall are maximum and most frequent and the temperature drops considerably. ‘Chillai-Kalan’ began on December 21 and will continue till January 31. The 40-day period is followed by a 20-day long “Chillai-Khurd” (small cold) and a 10-day long “Chillai-Bachha” (baby cold).

As for Punjab and Haryana, Hisar was the coldest place in the two states with the minimum settling at 0.2 degrees Celsius, seven notches below normal limits, the MeT department said.

The minimum temperatures in several cities in the two States were even lower than Shimla which registered a low of 4 degrees Celsius.

Most places in the two States witnessed fog with visibility reducing to 600 metres, disrupting air, rail and road traffic in the region. The Met department has forecast no relief from the intense cold conditions in the next three days besides predicting dense fog in Punjab and Haryana.

Weather was dry over Uttar Pradesh while cold day to severe cold day conditions occurred at most places in the State.