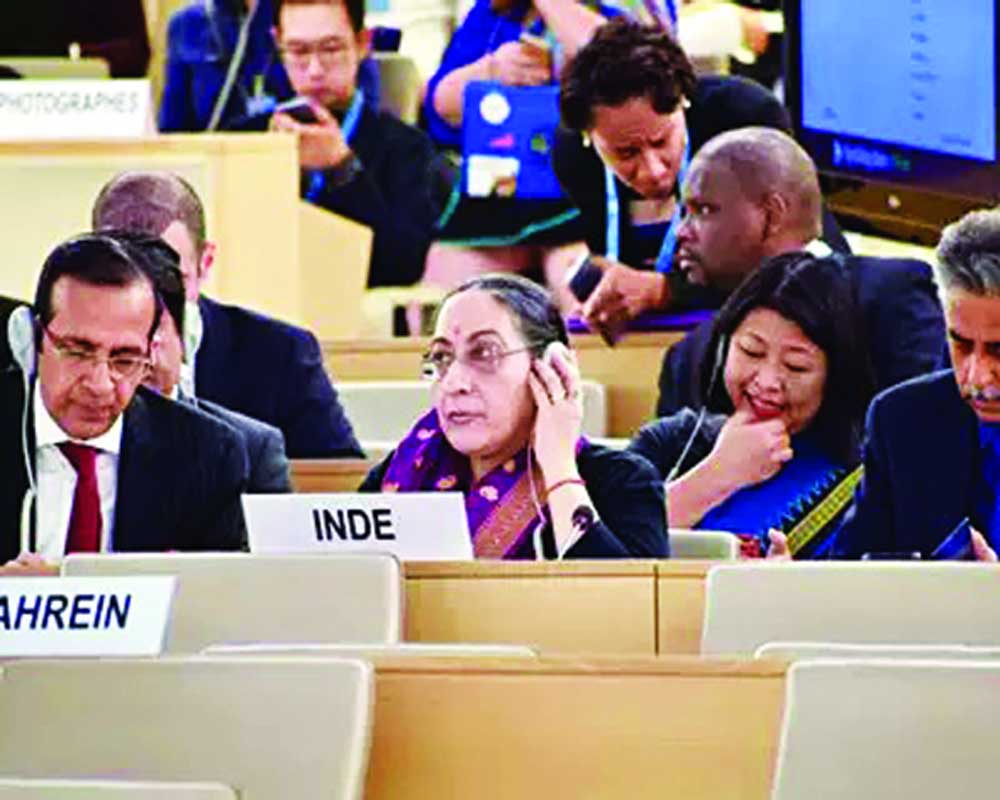 India and Pakistan engaged in a war of words over the Kashmir issue on Tuesday at the UNHRC with New Delhi stoutly defending its “sovereign decision” to revoke Jammu & Kashmir’s special status, an issue on which Islamabad demanded an international investigation by the global rights body.

She asserted that the revocation of Jammu & Kashmir’s special status was India’s sovereign decision and it cannot accept any interference in the country’s internal affairs.

Responding to UN human rights chief Michelle Bachelet’s Oral Update on Monday, Singh said the recent legislative measures taken by India in Jammu & Kashmir were within the framework of its Constitution.

Bachelet on Monday expressed “deep concern” over the impact of restrictions in Kashmir, and asked India to ease the current lockdowns to ensure people’s access to basic services.

“These decisions were taken by our Parliament...We wish to reiterate that this sovereign decision...Is entirely internal to India. No country can accept interference in its internal affairs, certainly not India,” Singh said.

Exercising its right to respond to Pakistan Foreign Minister Shah Mehmood Qureshi’s statement at the UNHRC, First Secretary in the MEA Vimarsh Aryan said Article 370 was a temporary provision of the Indian Constitution.

“We are not surprised at Pakistan’s hysterical statements with false narratives aimed to politicise and polarise this forum. Pakistan realises that our decision cuts away ground from under its feet by creating obstacles in its continuing sponsorship of cross-border terrorism,” he said.

Amidst Pakistan Prime Minister Imran Khan’s provocative anti-India statements, Aryan said, “Some Pakistani leaders have even gone as far as calling for jihad to encourage violence in Jammu & Kashmir...To create a picture of genocide, which even they know is far from reality.” The Indian diplomat from Jammu & Kashmir said the people of Kashmir are united to preserve the core values of democracy and Islamabad has “no locus standi to talk on Kashmir”.

Earlier at the session, Qureshi demanded an international investigation by the UNHRC into the situation in Kashmir and urged the world rights body not to remain “indifferent” after India revoked Jammu & Kashmir’s special status on August 5.

“Today, I have knocked on the doors of the Human Rights Council, the repository of the world’s conscience on human rights, to seek justice and respect for the people of Kashmir,” he said.

He asked the Council to constitute a commission of inquiry into the situation in Kashmir, as recommended by the Office of the UN High Commissioner for Human Rights. MEA Secretary (East) Singh, in a clear reference to Pakistan, said those who speak on the human rights of minorities in other countries are “trampling upon them at will in their own country. They cry victim when they actually are the perpetrators”.

There was a need to call out those who are misusing the UNHRC for “malicious political agenda under the garb of human rights”, she said.

Despite challenging circumstances, Singh said, “Democratic processes have been initiated. Restrictions are being eased continuously. Temporary preventive and precautionary measures were necessitated to ensure safety and security of our citizens in the face of credible threats of cross-border terrorism.”

In an apparent reference to the Pakistani delegation led by Qureshi, she said, “One delegation has given a running commentary with offensive rhetoric of false allegations and concocted charges against my country.”

“The world is aware that this fabricated narrative comes from the epicentre of global terrorism, where ring leaders were sheltered for years. This nation conducts cross-border terrorism as a form of ‘alternate diplomacy’,” Singh said.

“Those who abet, finance and support terrorism in any form on territory under their control are in fact the worst violators of human rights,” she said.

The world, in particular India, has suffered greatly on account of the activities by “practitioners of state sponsored terrorism” and it is time to collectively take decisive and firm action against terror groups and their abettors who threaten the fundamental human right to life.

“We must speak out. Silence only emboldens terrorists,” Singh said.

Responding to Qureshi’s allegations, Aryan said Pakistan has pretended to speak as the voice of the global community on human rights at the UNHRC forum.

“But the world cannot be fooled. Pakistan’s gory record speaks for itself. This rhetoric will not distract international attention from Pakistan’s persecution and elimination of religious and ethnic minorities - be it the Christians, Sikhs, Shias, Ahmadiyas and Hindus,” he said, adding that the persecution of minorities in Pakistan is well documented.

On the issue of the National Register for Citizens in Assam, Singh said it was a “statutory, transparent, nondiscriminatory legal process mandated and monitored by the Supreme Court of India”.