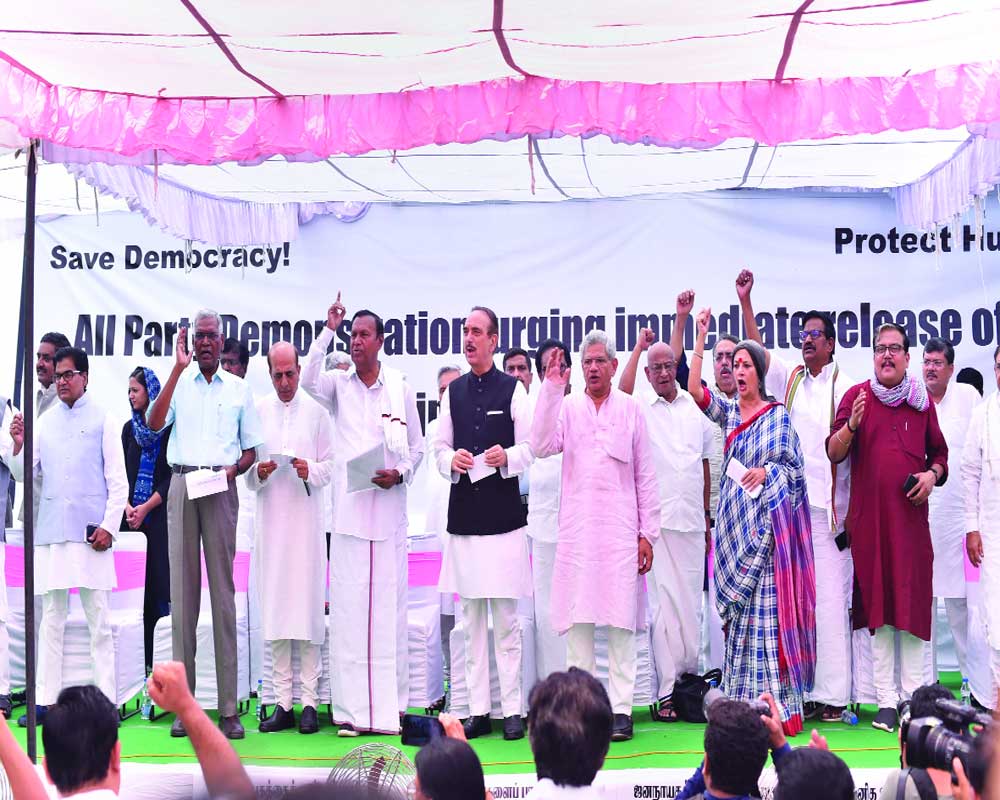 Opposition parties, including the Congress, the TMC, the DMK, the RJD, the Samajwadi Party and the National Conference staged a protest in the national Capital on Thursday seeking immediate release of political leaders put under detention in Jammu & Kashmir after the abrogation of Article 370.

Addressing the protest, Azad said, “There is something grave happening in the State and the Government is hiding it from us. He also slammed the role of the country’s media, saying, “It is being reported by foreign media but not our media.”

Blaming the Modi Government for perpetrating excesses on the people of the State, Azad evoked the memory of former Prime Minister Atal Bihari Vajpayee, saying he was a thorough gentleman, a great parliamentarian and a democrat. “If Vajpayee was at the helm of affairs, this would not have happened,” he added.

Yechury alleged that the Centre had manipulated the Constitution and the process had started months ago when the ruling BJP withdrew from the coalition Government, headed by Mehbooba Mufti, in Jammu & Kashmir. “All this is a part of a larger conspiracy. They want to make India a ‘Hindu Rashtra’ (Hindu nation) by abrogating the Constitution itself,” he said.

In a resolution passed during the protest, the Opposition parties said as a consequence of abrogation of Article 370 without holding consultations with the people of Jammu & Kashmir or their representatives, an undeclared state of Emergency had come to force in the Valley.

“We stand by the people of Jammu & Kashmir in their difficult hour. The decisions taken by the Union Government to impose a complete communication blackout and the continued detention of former Chief Ministers and political leaders...Members of civil society and even innocent citizens running into thousands are matters of serious concern. There has been a chilling crackdown on free speech and the right of Assembly. Such actions go against the fundamental rights guaranteed by the Constitution of India and need to be immediately reversed. We demand immediate release of all public representatives of mainstream political parties and innocent citizens,” the resolution said.

Samajwadi Party (SP) MP Ramgopal Yadav asked if the situation in Kashmir was normal, why political leaders continued to be in detention?” The way they (Centre) have bifurcated Jammu & Kashmir, tomorrow they will say Uttar Pradesh, Bihar, Maharashtra and Tamil Nadu are large States and hence, unmanageable. They will divide these States into multiple Union Territories, appoint Lieutenant Governors and run proxy Governments,” he said.

The leaders raised slogans demanding restoration of normalcy in Jammu & Kashmir, resumption of telecommunication services in the Valley and immediate release of all political leaders who have been detained.