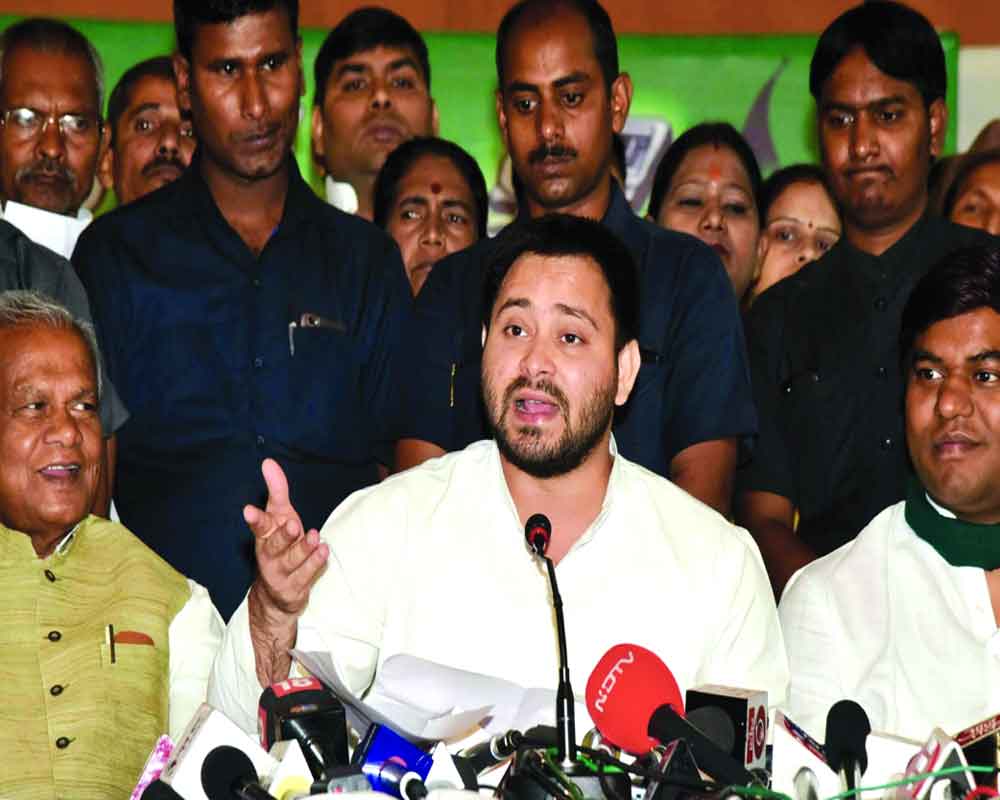 Former cricketer Kirti Azad, a sitting MP from Darbhanga, who recently joined the Congress does not figure in the list of grand alliance candidates from Bihar after the RJD refused to give up its claim on the contentious seat of Darbhanga in the heart of the Mithilanchal region.

Following this, sulking Congress leaders kept away from the joint Press conference addressed by RJD leader Tejashwai Yadav in Patna to announce the candidate of the Mahagathbandhan.

The Congress has announced the name of eight of the nine candidates who will be in the fray from Bihar. Kirti still has a chance of contesting from the State if he is nominated from the Valmiki Nagar seat, which is in the Congress’ kitty and for which the party has not named its candidate.

It was clear that despite being in jail, RJD chief Lalu Prasad called the shots in the distribution of seats and nomination of the candidates of the grand alliance. The denial of ticket to Kirti Azad is a personal setback for Congress president Rahul Gandhi, who is reported to have assured Kirti Azad that he would be fielded from Darbhanga.

As per the seat-sharing formula, the RJD has got 20 seats, out of which it is giving up one for the ultra-Left party; the Congress has nine, followed by five for Upendra Kushwaha’s RLSP and three each for Jitan Ram Manjhi’s HAM and Mukesh Sahni’s VIP.

The announcement of the grand alliance candidates was made by Tejashwi, but absence of senior Congress leaders on the occasion showed the party’s displeasure over arm-twisting by the RJD.

RLSP leader and former Union Minister Upendra Kushwaha too is reported to be sulking because the RJD wants him to accommodate at least one RJD nominee from his quota.

Tejashwi, announced the candidature of his sister Misa Bharti from Pataliputra, Congress’ Meira Kumar from Sasaram and RJD leader Abdul Bari Siddiqui from Darbhanga. Siddiqui is a senior leader and has held important Ministries besides having served as Leader of Opposition in the State Assembly. Also in the contention for the seat was Md Ashraf Fatmi, a RJD strongman and a close associate Lalu. Fatmi, who represented Darbhanga in the past, was runner-up in 2014.

Tejashwi also announced that the RJD would be fielding Tanveer Hassan in Begusarai, the party candidate who came in second in 2014, a decision that may queer the pitch for CPI’s Kanhaiya Kumar, who is taking on firebrand BJP leader Giriraj Singh.

“Our candidates for 18 constituencies are final. We will do the same for Sheohar in the next few days while we are leaving Ara in favour of the CPI(ML) as had been announced earlier,” Tejashwai said.

Withholding the name on Sheohar seat could be seen as an attempt to mollify Tej Pratap Yadav, who resigned from the post of patron of the RJD student’s wing on Thursday, to push candidatures of his favourites Angesh Kumar and Chandra Prakash from Sheohar and Jehanabad, respectively.

Former State Minister Surendra Yadav’s name was declared on Friday for the Jehanabad. Yadav, who asserted that the Mahagathbandhan was intact and unbreakable, denied reports of rift between his party and the Congress and taunted the NDA over BJP rebels entering the fray from seats like Banka and Katihar.

Among the RJD chief’s family members, his eldest daughter and Rajya Sabha member, Misa Bharti, will once again be in the fray from Pataliputra where she had lost in 2014 to her father’s former loyalist Ram Kripal Yadav, who joined the BJP and went on to become a Union Minister.

Party MLA Chandrika Rai, whose daughter Aishwarya is married to Prasad’s elder son Tej Pratap Yadav, would be contesting from Saran, which was unsuccessfully contested by Rabri Devi in 2014.

Earlier known by the name Chapra, the seat was a pocket borough of Lalu Prasad, who had got elected from there a number of times. Rai will take on sitting BJP MP Rajiv Pratap Rudy. His candidature is, however, likely to annoy his son-in-law, who has moved a petition to divorce his wife of six months. Tej Pratap Yadav’s resignation as patron of students’ wing, was seen as his expression of anguish over the RJD pushing his father-in-law despite the estrangement.

Former Union Minister and RJD national vice-president Raghuvansh Prasad Singh will contest from Vaishali, which he won a number of times but in the last general elections, he lost to mafia don-turned-politician Rama Singh fielded by the LJP.

Hina Shahab and Veena Devi, who are wives of gangsters-turned-politicians Mohd Shahabuddin and Anant Singh respectively, will also be in the fray. Shahab will be the RJD candidate from Siwan, once considered a citadel of her jailed husband. Neelam Devi, whose husband Anant Singh is an Independent MLA, will be the Congress nominee from Munger.

Former Lok Sabha Speaker Meira Kumar will be the Congress candidate from Sasaram which she lost to BJP’s Chhedi Paswan five years ago. The candidature of actor-turned-politician Shatrughan Sinha from Patna Sahib is almost certain with the seat falling into the Congress kitty, though it was not announced as the BJP leader is yet to formally join the party.

HAM will be fielding Ashok Ram Azad Chandravanshi from Nalanda, the home district of Chief Minister Nitish Kumar, where he will take on sitting MP Kaushalendra Kumar.

The RLSP, which has already fielded its candidate from Jamui, gets Paschim Champaran, Purvi Champaran, Ujiarpur and Karakat, Kushwaha’s current seat, in addition. The candidates would be announced shortly.

Mukesh Sahni a former Bollywood set designer, who recently floated the Vikassheel Insaan Party will be contesting from Khagaria. His party will also be fielding candidates from Muzaffarpur and Madhubani.