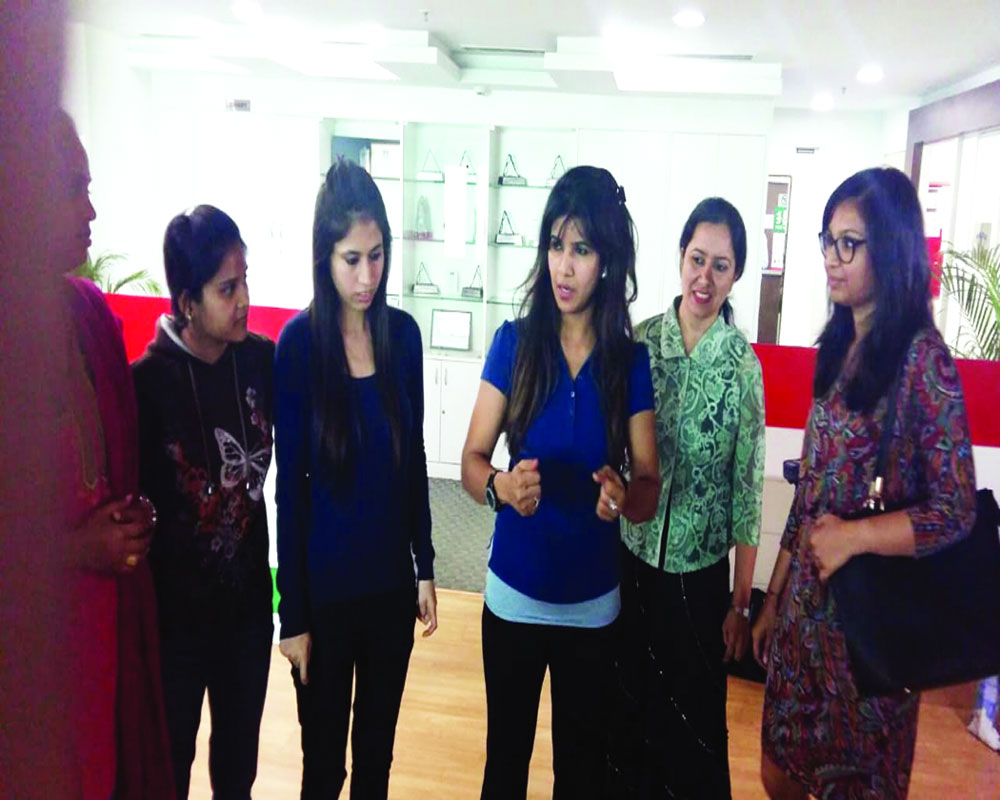 From working at top positions with MNCs to motorbike racers to working in the Armed Forces, women have been breaking into the male dominated workplace including being hired as bodyguards. SHALINI SAKSENA speaks to some who left their comfortable jobs to work as protection officers to step into a profile considered only for men

There is a stubbornness about me that never can bear to be frightened at the will of others. My courage always rises at every attempt to intimidate me

Imagine a scenario. A group of 18-year-old girls are out partying. When 20-something boys decide to crash their fun. Only this doesn’t pan out the way that they had thought it out. From nowhere a woman — all of 5’2 wearing a blue T-shirt, jeans and a black jacket steps in and politely asks the boys to move away.  At first, they treat it as a joke and ignore the request. But the lady in question looks directly at them and takes a step towards them as a warning. The move is taken seriously. A crisis is averted. The boys move away. The girls keep having fun, the party continues and the lady goes back to her position. Meet women protection officers who are hiring themselves as a protection detail and call themselves executive personal associates.

Priya Yadav, who lives in Gurugram, tells you that her journey may started out by working as an HR but today she trains people to build mental strength. She also hires herself out as a protection officer on a project to project basis.

“I chose to work in the security industry because women in our families are not taught how to be confident in the face of any adversary. Most women are not bold. They feel insecure when they step out of their homes. I wanted to change this,” the 26-year-old says who did her BBA in HR before going for an MBA in HR.

She worked in the HR department for three years. A part of her work profile, involved training people in the company she worked with to mentally train them so that they could become better at their respective work. This got her thinking. If she could train 15 employees, why not more? She started looking for avenues where she could use her skills. This is when she came in contact of Veena Gupta, founder-CMD of Seam Group of companies, a pre-eminent name in the security services domain.

“When I met her, I knew I had found what I was looking for. I trained under her and brought in my skillsets. Today, besides teaching metal well-being, I work with Gupta on a project to project basis as a protection officer. I work with people of all ages — men, women and even children. Our priority is to ensure that our clients feel safe wherever they are. When we were growing up, we did what our parents asked us to do. Today, kids do what they want to do. The only thing that parents can do is provide an environment where they are safe. As for the teenagers, they know that I will not tattletale. They are comfortable that I am there in case there is any trouble. Even parents are comfortable that a woman is there to protect their child. Not that a man can’t do the job. But  it is an observation that parents feel comfortable if there is a woman protection officer for their daughter,” Yadav tells you.

Also, the fact that Yadav is well-educated makes a difference. “Clients are more confident when they realise that I carry myself well and am trained to do a job that is considered to be male dominated. When parents hand over their kids in our protection, they relax knowing that their child is in good hands and no harm will come to them,” Yadav says and adds that the problem is not the clients but the society which possess roadblocks.

“There was a time when women were not working in the corporate sector. Today, they are and doing well for themselves. The same is true for lady bodyguards. There are fewer women in this industry. But with time, this will change and our role as protection officers will no longer be considered strange,” Yadav opines and says that there is plenty of potential for lady bodyguards in the coming years. “I don’t know what the future holds but for now, the going is good,” she says.

For Vanlalhruaii Zadeng, who is from Shillong, Mizoram, it was her travelling that proved to be a turning point. “I am a chef by profession. I was in New York, working there. A part of my job was to look after food security for the delegates. I was in-charge of food inspection, that the temperatures are right. This exposed me to the world of security. I worked in Qatar as well where I learnt more about security as a chef. I made up my mind to enter this industry. I found out about ISA. But I didn’t take up the job there since I had to travel the world over. So I decided to come to India and explore opportunities here last year. I did a certificate course in CCTV surveillance. I spoke to a lot of people and the feedback was there is no scope for executive protection associates (EPA). But that got me thinking that there is a market for women EPAs,” Zadeng explains who prefers to be called Mash.

The problem she tells you is the mindset of the men in India— it is patriarchal. The problem also is the women themselves who need to show a stronger side. “This message should be broadcasted via all forms of communication, be it news and or even advertisements. The change in the society will come only when there is awareness. We have so many international women delegates who travel to our country. There is so much scope for EPAs. There was a three-day conference last year, sadly, there were only six lady EPAs. But if we look at the overall perspective, there are so many women guards — those who have passed Class X and working. What we need is trained protection officers” the mother of three tells you and opines that every woman should be able to defend herself opening avenues for her in the security space.

She tells you that there are job opportunities for women at all levels. “They can be guards at the gate, they can work in a corporate setup. With proper certification and training one can be an EPA. But there are some certifications that are extremely expensive. Not everybody has Rs 3 lakh for a course even though it may get them a job that pays Rs 1 lakh,” Mash says.

Unfortunately, Mash has had to put her dreams of pursuing a career in security for the time being. She is all set to open her own culinary school in Shillong. However, she is optimistic and feels that she may use her certification in CCTV by setting up a business and hire women for the job.

Unlike Mash, Puja Kumari is lucky that she gets to pursue her passion instead of working in an environment that is considered safe for women. Being the only child helped her in pursuing her dream.

“I am from Ranchi. When I came to Delhi I was scared. I didn’t have the confidence to speak with people. I chose this profession because no one is safe in our country. I didn’t want to do run of the mill job. I wanted to make a difference. When I was still studying, I had no idea that I could work as a protection officer. But when I came to Delhi, after my marriage, and settled in Gurugram I saw a lot of videos where they talked about lady bodyguards. I had done my B com (H) and wanted to do an MBA. But after I saw all the videos and met Gupta and trained with her for six months, I knew that I would not be doing my PG. I was given training not only to protect others but also myself. This training came in handy when one day, late at night, an autowalla thinking that I would not be able to defend myself decided to act smart and took a different route. I immediately held him from the back, the way I was taught. That was when I realised the importance of self-defense,” Kumari says who has been working for Gupta full-time now.

The good is that not just her parents but her husband too is just as supportive. Her husband who works with an IT company in Gurugram encouraged Kumari to pursue her dream. But she tells you that the problem is the society. “The trend is that the minute the clock strikes 8 pm, the rowdy elements are out in the streets. These are the people who make snide remarks. More so when they realise that I am working as a bodyguard. They make fun. But my work is to ignore such comments and continue to do my job,” the 24-year-old tells you who is drawing a salary of Rs 20,000. But she tells you that other women with more experience are paid much higher — over Rs 50,000.

The challenge she tells you comes when the family doesn’t support you. Most of the girls who want to work as bodyguards need encouragement and motivation that they have taken the right decision in working in a male dominated field. “If this support is missing, the motivation to push oneself lessens, it demotivates you. Given the present scenario, women need to be encouraged to take up any job that they want to. They should be encouraged by the family to make a place for themselves as individuals,” Kumari says who wants to be like Gupta — be recognised and do the good work that she is doing.

Her advice to women who want to work in this field: “I want them to focus on the job at hand. They shouldn’t be looking at their watches. Once they become bodyguards, there is no day or night. If there is work, they have to report on time and give their best on the job,” Kumari says.