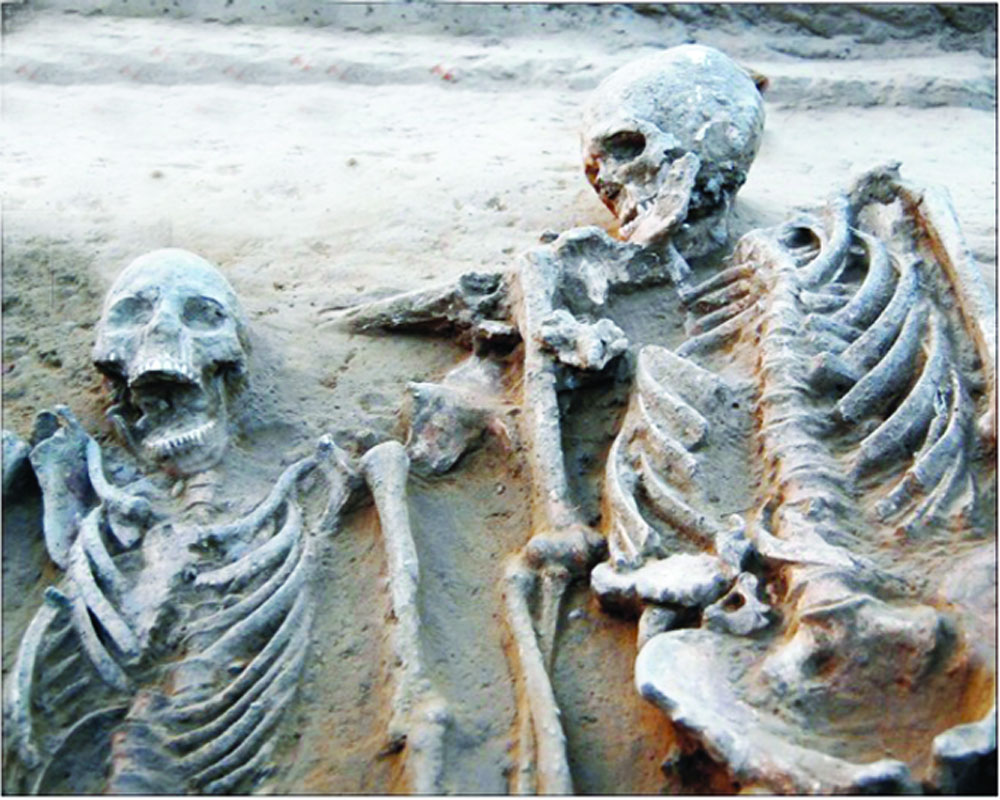 Archaeologists tell Apporva Shardha that the couple grave excavated in Rakhigarhi village in Haryana is an example that the concept of life after death is more than 4,500 years old

Do you believe in forever and wish to be with  the love of your life even in death? If you think that you are the only one with such a dream, you would be wrong. The first ever couple to aspire for such future was found at a 4,500-year-old site of the Harappan civilisation.

Though the archaeologists and scientists from India and South Korea found these two ‘rare’ skeletons in a Harappan (or Indus Valley) city (now Rakhigarhi village in Haryana) back in 2016, it took the researchers two years to put the events in a chronological order and finally publish it an international journal. One such finding is that — the man was aged about 35 and the woman, about 25.

Such findings make for great storytelling. The research paper mentions that when a trench was unearthed, nine graves were found, one turned out to be a joint burial. The skeletal remains of both individuals found at the bottom of the pit were well preserved except for the foot bones.

Pioneering studies on them have successfully reconstructed the funeral rites of the Harappan people. Significant information on the anthropological features of Harappan mortuary practices also has been obtained. From the beginning, the deads have been tickling the curious nerve of archaeologists and Harappan civilisation was no exception.

While the presence of couple burials is in itself rare, archaeologist have had speculations regarding the position in which these burials were kept. The first joint burial was found at Lothal. There was a speculation that the burial was a result of an ancient practice of Sati or self-sacrifice by the widow to demonstrate grief over husband’s death, these are however merely assumptions.

The burial has two skeletons, a young male and a woman, buried at the same time in the same grave with the man’s face turned toward the woman. The burial seems more like that the man is looking in an ‘intimate way’ towards the woman. The burial has been compared with lovers of Valdaro of Italy and Alepotrypa cave in Greece. While being buried next to your lover is romantic, it is astonishing how these burials are unharmed despite being buried for centuries.

“This is the first time we are finding a couple burial, and the burial seems more like dignified burial where there are no signs of any injury on the skeletons,” Professor Vasant Shinde, Vice-chancellor, Deccan College and the lead researcher says.

He tells you that the Harappans believed in life after death which explains the pottery and bowls found in the graves. The burials were not just blessed with the divine presence of their beloved partners but also equipped with everyday things they would need in their next life.

“The pots may have contained food and water for the dead, a custom probably fuelled by the belief that the dead may need them after death. Hence, the contemporary view of life after death may actually be as old as 5,000 years,” Shinde says.

Harappans would look at the intricacies of the life after death. They would not just bury small pots with them which would serve as useful utensils, they had desires to carry chariots and other useful items in their afterlife.

Sinauli another unknown Harappan city has also been in limelight due to a copper chariot found buried amongst the coffins. Earlier the city has thrown up more than 125 elaborate burials with material which were different than any thing discovered so far.

“There were no coffin burials found in Rakhigarhi but Sinauli had quiet a few and also the period of Rakhigarhi graves and Sinauli graves are different, the Rakhigarhi is Harappan and Sanauli Burials are late Harappan,” Dr VN Prabhakar director, Archaeological Survey of India who has done PhD on the burials of Sinauli tells you.

Sinauli isn’t the only place where such unique items were buried for afterlife. At Mandi village in Muzzafarnagar a large quantity of gold jewellery was found which was labled as Harappan though nothing of that kind was found in regular excavations at various Harappan site.

The find surprised archaeologists. “First, Mandi is located near the Yamuna river. This area has been considered peripheral to the main distribution area of the Harappan civilisation. Second, the sheer quantity of the jewellery recovered from the site makes it the largest ancient jewellery ever found in India, if not the entire subcontinent,” Rakesh Tiwari, Ex-Director General ASI says.

Not only Mandi, Harinagar, in Sharanpur, a total of 78 objects (as estimated so far) were found which include 55 vessels weighing 44.824 kg, 20 tools and weapons weighing 6.902 kg and a mirror 245 gm. In per cent share of vessels and other objects in number is 73 per cent and 27  per cent, and, in weight is 86  per cent and 14 per cent respectively in a big copper cauldron.

The region between the Yamuna and the Ganga — the Doab — has become the new area of interest and is being looked upon as holding the possibility of a parallel culture dispelling the clouds of the Dark Age. Not so much Harappan character of Sinauli chariot and the burials give support to this premise.

Another significant discovery that took rounds in the archaeological circle was the discovery of a large cache of copper utensils further east  across Ganga in district Bijnor. These finds become important as now they are scientifically dated to pre 2000 BC era, contemporary to Harappan yet distinct. These discoveries, exciting as they appear, are yet to be get currency. Like every new thing requires gestation period, significance of these finds will take long to be accepted. The high standards of urban life set by the first civilisation did not allow scholars to accept anything less grand than Harappans as civilised.

Time stores the fate of these significant new finds, but for now it seems that these discoveries are still not enough for the undeciphered civilisation.

“The issue of Late Mature Harappan-Late Harappan-Ochre Coloured Pottery gets compounded due to the usage of different terms to denote the archaeological culture, the lack of definition and scientific dates, or, perhaps the Harappanism itself is not well understood,” Dr Bhuvan Vikrama, Superintending Archaeologist, ASI Bhopal Circle, says.

The civilisation that started and evolved in the most spectacular manner ended in not so particular way. The ageold civilisation is, yet, in the mood to throw up some more revelation.  The unresolved puzzle of the settlement lies in its unsystematic decline. But the recent discoveries have started to dust the mysteries that surrounded the civilisation and other related mysteries. Many other traces of some of the contemporary or parallel civilisatons are waiting to be exhumed. Whether these findings hold the capabilities to turn some new and comepeletly unknown pages of the history and change the ageold view point or will  they be silently buried in the grave beneath the already accepted and settled theories?

Harappan studies have always been replete with speculations, mysteries and surprises. Another thread of new information from the same site was of the 4,500-year-old skeleton, that possibly belongs to the Indus Valley, was exhumed from the site and reveals an interesting quirk found in its DNA composition. The DNA  found in the bone shows that ancient denizens of the area were ‘a mix of two populations” one of Dravidian ancestry and the other of Iranian Agriculturalists, both not native to the Indian subcontinent.

“The dead was disposed in several ways earlier and the Vedic scriptures do help in the excavation process. All these methods of disposal of deals has been referred to in Rig Veda as well. The custom of burying the dead was followed by one section of society preferably the lower strata and the same continued even after the Harappan.This may be pinnacle of the caste system still prevalent as has been found at Sinauli in UP and Farmana in Haryana,” Dr RS Bisht Harappan expert, excavator of Dholavira says.