Gandhi and his India

Gandhi and his India 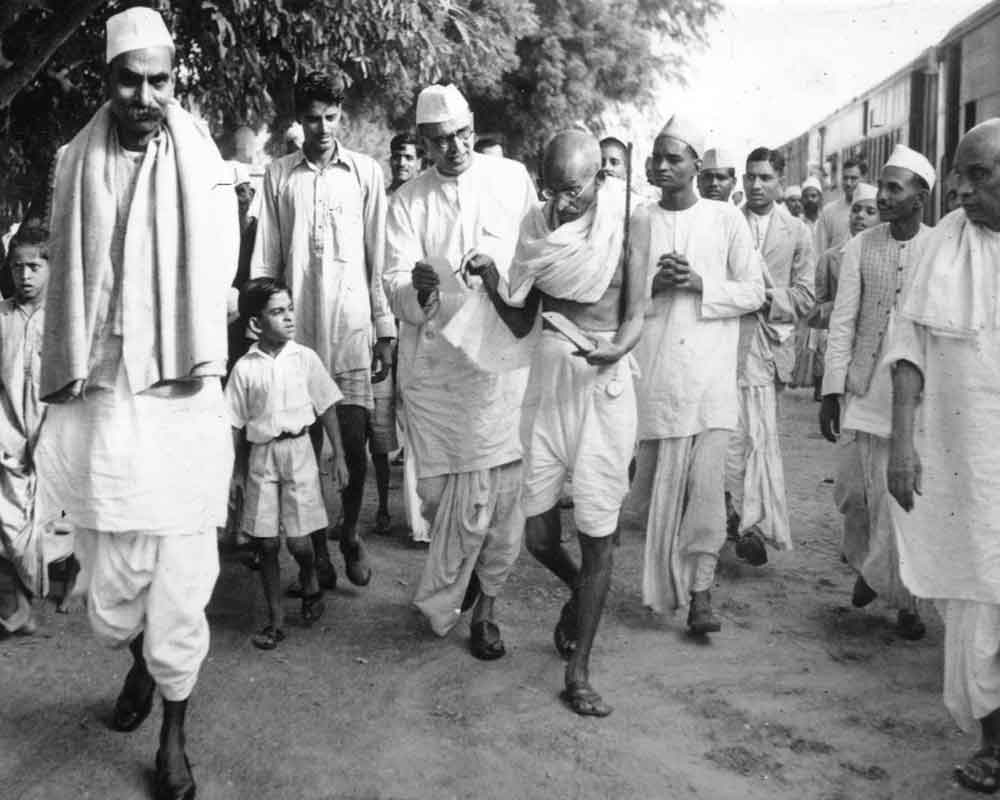 Aparna Basu’s Gandhi’s Vision: Freedom and Beyond  takes a leaf out of Mahatma Gandhi’s life and gives readers a sense of the thoughts and actions that led India to Independence and built a base for social development. An excerpt:

The Swadeshi Movement was a result of the Partition of Bengal by Lord Curzon in 1905. Conceived as an administrative readjustment of boundaries, it was overshadowed by political considerations. The movement formally began on August 7 at the historic Town Hall meeting in Calcutta, presided over by Maharaja Mahindra Chandra Nandi and addressed by Surendranath Banerjee. The protest took the form of boycott of foreign goods and the patronage of indigenous products popularly known as swadeshi. All classes of people — zamindars, professional groups such as lawyers, teachers, journalists, doctors, students and women joined the movement.

Rabindranath Tagore announced his plan in September 1905 to observe Rakshabandhan on October 16, the Partition day, and women took part in it. Another rite observed on this day was arandhan, suggested by Ramendrasundar Trivedi, asking women not to cook. Women organised swadeshi bhandars and Sarala Devi Chaudhurani, niece of the Rabindranath Tagore, opened Lakshmi Bhandar which sold only swadeshi products. Women gave up using imported cloth and smashed their bangles (churis). Bipin Chandra Pal addressed women’s meetings during his tour of East Bengal in 1907 and the women of Tangail gave a big reception to Surendranath Banerjee when he visited Mymensingh later that year. A women’s meeting was organised in the house of the eminent physician Dr Nilratan Sircar to honour the revolutionary Bhupendranath Dutta’s mother. A number of women in Barisal gave their savings to the Swadeshi Bhandar Samiti.

Secret societies had started earlier In Maharashtra, and in Bengal, revolutionary organisations began to develop, mainly owing to the efforts of Aurobindo Ghose. The most important of these was the Anusilan Samiti founded in 1897. It received active help and encouragement from Sister Nivedita. Among others connected with the growth of revolutionary societies were Barindra Ghose (brother of Aurobindo) and Sarala Devi Chaudhurani. Women circulated revolutionary leaflets and helped in maintaining liaison between different revolutionary leaders.

As the movement spread over Bengal, mass meetings were organised where the creed of swadeshi was preached. Bonfires of foreign goods were held and students boycotted Government schools and colleges. ‘Bande Mataram’, the sacred mantra of Bankim Chandra, became the rallying cry and inspired people with a new sense of patriotism and national consciousness. The president of the Indian National Congress, at its 1906 session held in Calcutta, expressed the demand for swaraj. Aurobindo Ghose declared the attainment of complete freedom as the goal of the national movement. The demand for national education was also a part of the Swadeshi movement. National schools were started and a technical college was opened in Jadavpur. With the annulment of the Partition in 1911, the Swadeshi movement, which had been largely centred in Bengal, petered out.

Before Gandhi, Bal Gangadhar Tilak was the most widely known Indian political leader. Unlike his contemporary Maharashtrian Gopal Krishna Gokhale, Tilak was a radical nationalist but conservative in his views on social reform. In 1897, plague broke out in Poona and the Government had to undertake segregation and house search. Tilak organised his own relief measures, but criticised the Government for its harsh measures. As a result, he was arrested under Section 124 A of the Indian Penal Code on the charge of sedition. He was once again arrested in 1908 on the charge of writing polemical articles intensifying racial animosity between Indians and the British. In June 1914, he was released after spending six years in prison, most of which he had spent in Mandalay in Burma.

On his return, he found the political situation in India very different. Aurobindo Ghose had given up politics for a spiritual life in Pondicherry. Lala Lajpat Rai was away in USA. To conciliate the moderates and avoid any political confrontation, Tilak started the Home Rule League asking, like the Irish Home Rulers, for administrative reforms and not for overthrow of the Government. Annie Besant, an Irish ex-suffragette, an advocate of Free Thought, Fabianism and Theosophy came to India in 1893 to work for the Theosophical Society. She entered Indian politics in 1914 and founded the Home Rule League. She realised that for her movement to succeed, she had to get the support of the Indian National Congress, of both the Moderates and the Extremists. She launched a campaign through her two papers, New India and Commonweal and organised public meetings and conferences demanding that India be granted self-government on the lines of Britain’s White colonies after the War. In 1917, the Government of Madras placed Mrs Besant and her associates BP Wadia and George Arundale under arrest. There was nation-wide protest and many ‘Moderate’ leaders like Madan Mohan Malaviya, Surendranath Banerjee and MA Jinnah joined the Home Rule League to show their support to Annie Besant. Tilak advocated the use of passive resistance if the Government did not release her. At Gandhiji’s instance about a thousand signatures were collected of men who were prepared to defy the internment order and march to the place where Besant was interned. The new Secretary of State, Lord Montagu was much more sympathetic and conciliatory and Besant was released. She was elected President of the Indian National Congress in 1917.

The announcement of the Montagu-Chelmsford Reforms divided the ranks of the supporters of Home Rule and the movement gradually lost its strength. In any case, its popularity had been mainly among the urban, English educated intelligentsia. However, it had generated a widespread nationalist atmosphere and created a group of individuals who played an important role in the national movement of the succeeding years, when under the leadership of Gandhi, it became a mass movement.

SEEDS OF SATYAGRAHA AND CIVIL

It was in South Africa where Gandhi spent twenty years, and evolved a method of political protest which he called satyagraha, which literally means ‘truth force’ or ‘the struggle for truth’. Gandhi described it as ‘a force which is born of truth and love or non-violence’. For him, it was the end of a quest for a moral equivalent of war. Satyagraha was not passive resistance, but active opposition to any form of injustice. Martin Luther King Jr read intensively into the Gandhian philosophy as a new and powerful weapon against injustice. But the opposition had to be non-violent.

In his own words, ‘Non-violence  is the greatest force at the disposal of mankind. It is mightier than the mightiest weapon of destruction’. King recognised Gandhi’s legacy of non-violence for the effectiveness of his own campaigns for racial integration. He became Gandhi’s greatest disciple by embracing satyagraha as a method of struggle for the emancipation of blacks in America. The Transvaal Government introduced the Asiatic Law Amendment Ordinance which required every Asian man, woman or child above the age of eight to register his or her name with the Registrar of Asiatics. Failure to do so was a criminal offence. In response to the Black Act, a public meeting was held in the Empire Theatre in Johannesburg in September 1906, attended by about 3000 Indians who took a vow to defy the law in a non-violent manner.

Excerpted with permission from Aparna