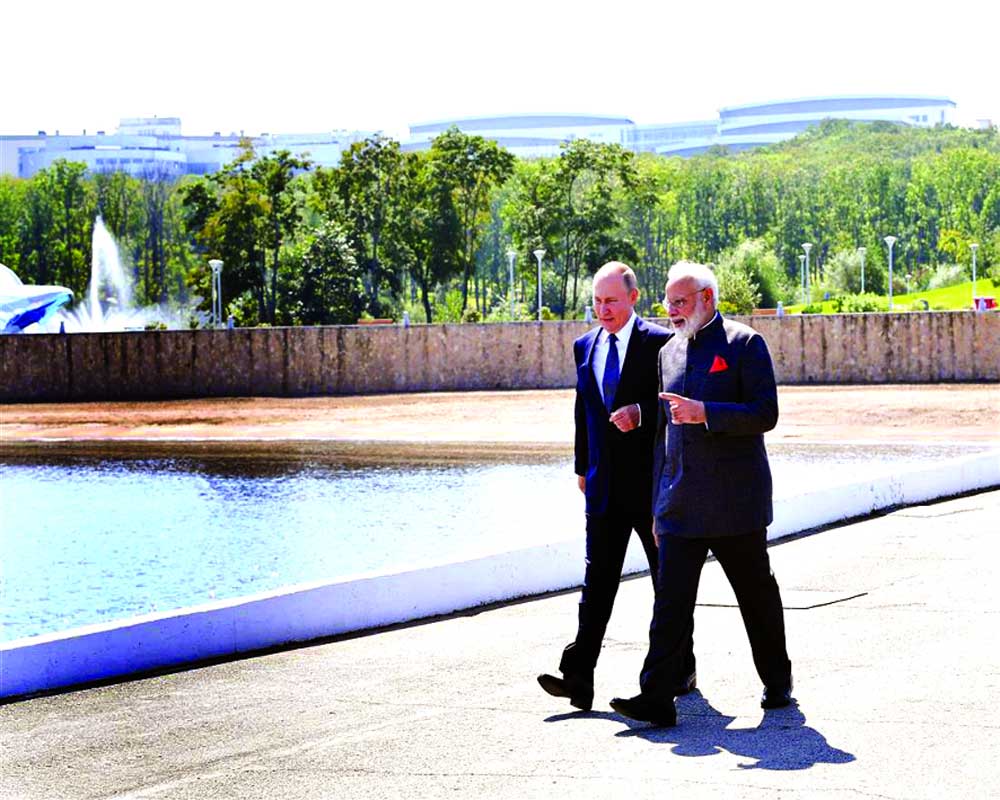 The Vladivostok Summit held earlier this month consolidates two decades of calibrated decisions by India and Russia to give a forward-looking agenda to their bilateral partnership in three core areas — economic, energy and defence cooperation

The 20th India-Russia Summit at Vladivostok on September 4-5, 2019 marked the first visit by an Indian Prime Minister, Narendra Modi, to the Russian Far East. It placed the port city and its surrounding region in the eye of a bold joint initiative to energise “strong, multifaceted trade and economic cooperation as the foundation for further expanding the range of India-Russia relations”.

Speaking at the Joint Press Conference with President Putin, India’s Prime Minister emphasised that the partnership between India and Russia was based on “trust”. The basis for this “trust” is rooted in the first India-Russia Summit held in New Delhi in October 2000, when the two countries signed a Declaration on Strategic Partnership. At that time, Russia was emerging from a decade of political and economic downturn following the disintegration of the Soviet Union. India was emerging from the first phase of her momentous economic reforms. The overall objective of the India-Russia partnership was designed to create strategic autonomy for both countries.

The first summit took place after India’s nuclear weapons tests of May 11-13, 1998, and newly elected President Putin’s pledge on May 7, 2000 to make Russia “a country that its citizens are proud of and is respected internationally”. The decision taken by former Indian Prime Minister Atal Bihari Vajpayee and President Putin to institutionalise the India-Russia Summit mechanism annually has withstood the test of time. At Vladivostok, India and Russia asserted that in “successfully coping with the turbulent realities of the contemporary world” they have “never been and will not be susceptible to outside influence”.

Rejecting “unilateral coercive measures not based on international law,” the Summit called for “strengthening” multilateralism and underlined the “primacy of international law”. Prime Minister Modi said that “both countries understand that we need a multipolar world to achieve peace and stability”. Russia reiterated its support for India’s permanent membership of the UN Security Council. At their joint press conference, both leaders underlined the bonds that link India and Russia together, with President Putin highlighting the deep mutual interest in “each other’s culture, history and moral values.”

The Summit consolidated two decades of calibrated decisions by India and Russia to give a forward-looking agenda to their bilateral partnership in three core areas — economic, energy and defence cooperation. In each area, the two countries prioritised the role of investments, manufacturing, employment and technology as catalysts for their burgeoning partnership. They agreed to integrate innovation in high technology products in telecommunications, pharmaceuticals, robotics, artificial intelligence and nanotechnologies into this framework.

The potential of economic cooperation to strengthen the “special and privileged strategic partnership” between India and Russia has remained largely untapped, despite several initiatives taken over the past 20 years. Bilateral trade has gradually increased from $1.5 billion in 2000 to its current annual level of about $11 billion, well short of the declared target of $30 billion by 2025.

The Vladivostok Summit resulted in a joint initiative to utilise the “immense energy of the private industry”, in Prime Minister Modi’s words, to turn this situation around. In addition to energy and defence cooperation, the economic partnership would target the pharmaceuticals, agriculture, civil aviation, railways, ship building, space, education and tourism sectors. The new strategy unveiled at Vladivostok integrates four supportive measures to increase Russian business participation in the Make in India programme, along with an increased Indian business participation in investment projects in Russia.

First, a bilateral inter-governmental agreement on the promotion and protection of mutual investments is to be negotiated to anchor this initiative. Second, steps would be taken to address non-tariff barriers to bilateral trade, including through broader discussions on a Trade Agreement between India and the Eurasian Economic Union. Third, coordinating support would be rendered by the investment offices of Russia in India and India in Russia. Fourth, the India-Russia Strategic Economic Dialogue mechanism set up after the 2018 New Delhi Summit would be geared to promote “cohesive and mutually beneficial cooperation in core sectors”.

Building on the initial attempts made in 2001 to bring the states of India and provinces of Russia into the framework of economic cooperation, the Summit envisaged interaction between Uttar Pradesh, Gujarat, Haryana and Goa with the 11 provinces of Russia’s Far East to provide depth to this process. Prime Minister Modi mentioned the “coal industry, the diamond industry, the lumber industry, as well as agriculture and tourism” as the specific focus of this interaction, which could impact on “exploring cooperation on temporary placement of skilled manpower from India” in Russia’s Far East.

The broad vision behind India’s historic economic engagement at the highest level with Russia’s Far East was brought out by Prime Minister Modi at the plenary session of the Eastern Economic Forum at Vladivostok on September 5, 2019. He said: “India will provide a $1 billion line of credit to further contribute to the development of the Far East. This is the first time that we are giving a line of credit to a particular region of a country. My Government’s Act East Policy has actively engaged with East Asia. Today’s announcement will prove to be the take-off point of the Act Far East policy and it is my firm belief that this step adds a new dimension to our economic diplomacy. We will be active participants in the development of the regions of our friendly countries according to their priorities.”

The primary objective of India-Russia energy cooperation has been India’s quest for energy security, and Russia’s interest in exporting its huge energy reserves on a long-term predictable basis to India, one of the biggest importers of energy in the world. The Vladivostok Summit discussed partnership in nuclear, oil and gas sectors within this framework, integrating it with the new thrust on economic cooperation.

Both leaders stressed civil nuclear cooperation as an “important component of strategic partnership”. Prime Minister Modi emphasised the significance of “localisation of nuclear power plants” with reference to the new reactors being constructed by Russia at Kudankulam, which will strengthen India’s nuclear reactor construction capabilities, including in manufacturing and in expanding her pool of skilled manpower. President Putin highlighted bilateral cooperation in Kudankulam as a “flagship joint project” and anticipated that “at least 12 Russian-designed nuclear power plants will be built within the next 20 years” in India. This would provide the basis for an increase in nuclear trade and technological cooperation between Russia and India, including in “joint manufacturing of equipment and fuel.” The Summit welcomed the success of India-Russia cooperation in constructing the Rooppur Nuclear Power Plant in Bangladesh, which motivated them to look at similar joint cooperation projects for nuclear power in third world countries.

It is significant that during the past 20 years India and Russia have been able to outline such a forward-looking nuclear energy partnership, which is in consonance with their international legal obligations on the peaceful uses of nuclear energy. Russia reiterated its strong support to India’s membership of the Nuclear Suppliers Group.

India’s investments in the oil and gas sector of Russia have crossed $15 billion, including her stake of $2.7 billion in the Sakhalin-1 project in Russia’s Far East from 2001. Russia’s Rosneft-led consortium, which acquired India’s Essar Oil (since renamed as Nayara Energy) for $13 billion in 2017, is expected to expand the capacity of India’s second largest oil refinery at Vadinar in Gujarat, which currently refines 20 million tonnes of oil annually.

An agreement on Hydrocarbons cooperation for 2019-2024 was announced during the Summit, which welcomed the implementation of mutually beneficial long-term partnerships between India’s Consortium of Oil and Gas Public Sector Undertakings and Russia’s Rosneft, and between Gas Authority of India Limited (GAIL) and Russia’s giant Gazprom. The projects being implemented included Vankorneft and Taas-Yuryakh in eastern Siberia, the location of one of Russia’s largest oil and gas reserves, and a contract for long-term supply of Russian Liquified Natural Gas (LNG) to India.

This approach is designed to create a strategic alignment for the supply and processing of Russian energy to India. A long-term predictable arrangement will mitigate the current volatility in supply and prices in global energy supplies to India. The impact of this emerging alignment will be felt in emerging partnerships in the inland and maritime transportation, port modernisation and energy processing sectors.

President Putin accompanied Prime Minister Modi on a tour of the Zvezda ship-building complex near Vladivostok, which enabled the two leaders to spend two hours together in the informal discussions. This continued a practice initiated with their meeting in Sochi in May 2018. The Russian leader’s public references to the “many Russian made ships” in the Indian Navy including the aircraft carrier Vikramaditya and leased nuclear powered submarine Chakra were significant markers for the Summit agreement on preparing “a framework for cooperation on reciprocal logistics support”.

At the Summit’s joint press conference, Prime Minister Narendra Modi termed the “steps that are giving our defence cooperation a solid foundation of co-manufacturing” a boost to Indian industry. President Putin emphasised the important role of “joint projects in India” to illustrate that “Russia does more than supply weapons to India.”

A significant takeaway from the Vladivostok Summit for future defence cooperation was the agreement for manufacturing spares of Russian/Soviet-origin equipment in India. This agreement represents a sustainable solution to a long-standing problem that has festered for almost two decades on the ground. By upgrading India-Russia defence cooperation, opening the doors for joint development and production of military equipment, components, and spare parts, as well as after-sales service activities, a visible economic dimension has been added to defence cooperation. At the heart of this new activity will be Russian participation through investments in joint ventures and technology in the Make in India programme, with its “spin-off” benefits for employment and technology diffusion.

The objective of prioritising economic cooperation to boost the India-Russia partnership will be require a supportive geo-political framework, especially for connectivity between India and Russia’s Far East.

The reference to an “open and inclusive Indo-Pacific region” in Prime Minister Modi’s address to the Eastern Economic Forum was accompanied by the announcement of a new maritime route between Chennai and Vladivostok to “increase connectivity between the regions”, which would traverse the South China Sea. Despite Russia’s reported hesitations on officially using the term “Indo-Pacific”, the Summit declaration’s reference to consultations on “integration and development initiatives in the greater Eurasian space and in the regions of the Indian and Pacific Oceans” denotes an emerging strategic convergence between India and Russia on an “inclusive” Indo-Pacific regional strategy. This would incorporate not only maritime connectivity in the Pacific, but also critical maritime connectivity routes in the western Indo-Pacific such as the straits of Hormuz and the Red Sea, as well as connectivity projects such as Chabahar in Iran and emerging maritime routes using the Arctic.

The Summit declaration identified cooperation in the Arctic and cyber security as emerging areas for India-Russia partnership. Russia’s long experience in deep sea fishing and deep-sea mining could provide the building blocks for the concept of the Blue Economy of the Indo-Pacific, as part of India’s SAGAR Indian Ocean strategy articulated by Prime Minister Modi in March 2015. Incorporating these areas into the special and privileged strategic partnership between India and Russia could catalyse the emergence of India as a maritime power.

The author was India’s Ambassador to the United Nations (2013-2015) and India’s Deputy Ambassador to the Russian Federation (2001-2005). He is a Distinguished Fellow of the Vivekananda International Foundation, New Delhi